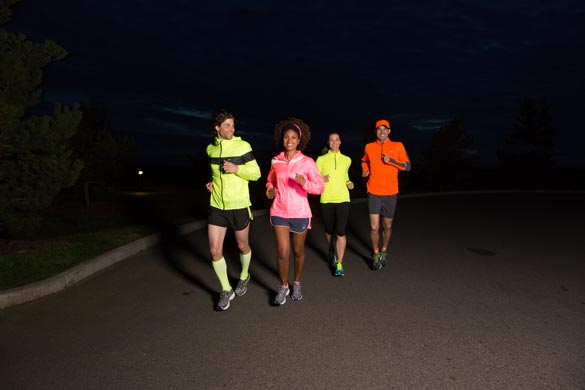 Running at night? Follow these tips to do it safely!

National Running Safety Month may be winding down, but the importance of being seen while on the road — especially when running at night — never goes away. Now that there’s less daylight, I know I’ve been more aware of how important it is to be seen when running at night. Heck, I might go out for a run at 4 p.m. and come back in the total and complete dark! Es no bueno without awareness and the proper gear so that cars can see ya!

I remember back during my trip to New York City for Brooks Running last year, they unveiled some of their new technology that used motion-capture technology and the principles of bio-motion to strategically place contrast fabrics, retro-reflective detail and active lighting to heavily increase not just visibility, but also recognition. That’s pretty much just a fancy way of saying that when a driver sees you running at night, they a) recognize that you’re a person and not a traffic cone; b) can quickly detect that you’re moving and where you’re moving to; and c) can see you from all angles — not just head on. It’s pretty amazeballs.

And this year, Brooks has taken the running-at-night safely tech up another notch. You can check out all of Brooks’ Nightlife Collection here and we’ll be talking about it more next week when we do our monthly review, but just know that it’s pretty amazing and helps keep you safer when running at night or at dusk. And in the meantime, stay safe running at night with these tips! 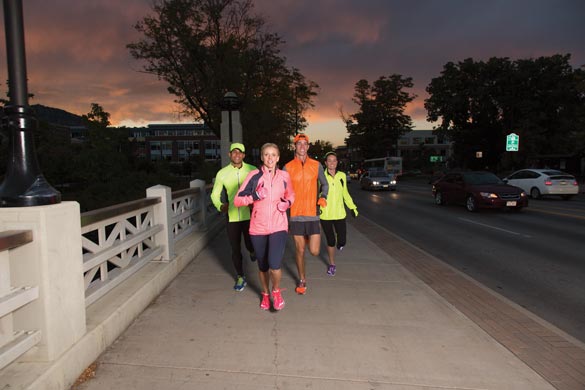 Bonus running-at-night tip: Run with others who are also decked out in Brooks’ Nightlife gear!

1. Run against traffic. You can see them better; they can see you better. Everyone wins!

2. Obey all traffic laws. When it comes to running at night safely, the road goes both ways (literally and figuratively!).

3. Open your eyes. Ditch the loud tunes and pay attention to what’s going on around you.

4. Keep your I.D. on you. Just in case anything happens …

5. Carry your cell phone at all times. We know it can be clunky, but better safe than sorry.

6. Stay on well-lit paths. Obviously you can be seen better running at night when there’s more light. Try to hit trails and roads with lights.

7. Be visible. Invest in gear so that you can to be seen!

Do you go running at night? Do you have special gear to keep you safe? —Jenn