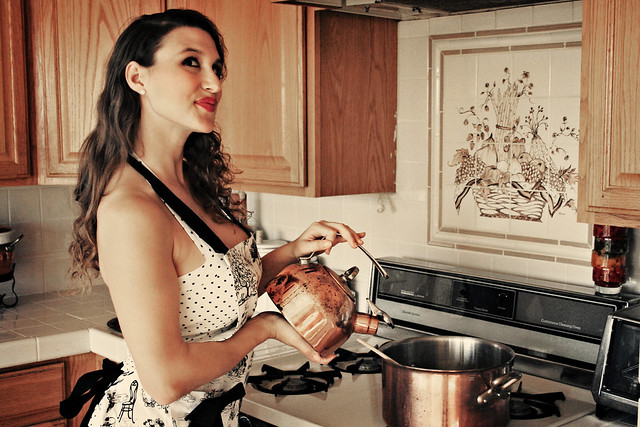 Some of us would make TERRIBLE ’50s housewives. Some would not. It’s nice to have the option to choose, right? Credit: molly_darling, Flickr

The only class I ever deliberately tanked was middle school Home Ec.

My poor, poor teacher. I don’t remember her name, but I’m certain I drove her positively nuts.

You see, 12-year-old Kristen was not going to bend to society’s traditional gender roles. I might’ve liked playing with hair and make-up, but who are you to tell me to wear a skirt? Or sew a button? Or — god forbid — cook? When it came time for the class project of sewing a simple apron, I opted to hot glue the seams. I honestly don’t remember what I did for the cooking segment, but I can promise you I didn’t actually cook.

I was still trying to figure myself — and society’s view of women — out, and the only way I knew to do that was to stand up against anything I saw as a norm. As I’ve grown, I’ve realized that I don’t have to fight against everything to still stand for equality.

I’ve learned to enjoy cooking. My husband and I often come up with ideas for new dishes together, or if one of us makes something from a new recipe, we’ll discuss what we might do differently next time to make it even better. (Basically, the answer is almost always “add more red pepper flakes.”)

Part of why I enjoy cooking is because I don’t feel it’s forced upon me. It’s not expected of me because I’m a woman who is married to a man and therefore I must have dinner on the table for him or he’s liable to run off with his secretary. It’s expected because I’m a grown-ass adult who likes to eat and therefore needs to, at least occasionally, make food.

Nigella Lawson made quite a few headlines after her estranged husband was photographed with his hand around her neck (and her in tears) at a restaurant. He later filed for divorce, apparently because she didn’t defend him enough in the media. Yeah, let that sink in.

Anyway, she was in the news again recently for her views on feminism. In an interview with the Observer Food Monthly, she was asked whether she considers herself a feminist, and claimed to be baffled because she felt the answer was “so self-evidently a yes.”

The “How to Be a Domestic Goddess” author then went on to say, “Feeling comfortable in the kitchen is essential for everyone, male or female. At the time it seemed so many people were fearful of cooking, and that meant home was never more than a stop-off from work. Women of my generation were keen — rightly — not to be tied to the stove, but the ramifications of this were that they felt a sense of dread in the kitchen. How can this be good for anyone?”

Is it just me, or is this something many of us struggle with? I feel like many women of my generation grew up spouting Jessie Spano quotes, calling anyone who expected us to meet a certain set of societal ideals “chauvinist pigs,” and channeling our inner Julia Sugarbakers anytime anyone dared say we couldn’t do something one of our masculine peers could do.

Rectifying that fired up, hear-me-roar attitude with our current fascination with all things Pinterest-perfect is a challenge I don’t know any generation has faced in quite the same way. And while it’s challenging at times, I also find it illuminating — some of the ladies I know who are amazing runners or CrossFit-ers or just general badasses are also bakers with talent to rival Martha herself. And some of the women I know who are practically Carol Brady in every way have no interest in the kitchen whatsoever.

I like to think feminism is at a point where the amount of time we spend in the kitchen has less to do with societal (or familial) pressure and more to do with the fact that we have the freedom to do what we love without being questioned. The kitchen has become a comfortable place for us because our place is no longer necessarily there, you know?

Thinking about this, though, made me wonder about other people’s feelings (or FEEEELINGS, as the case may be) about being in the kitchen and how it relates to the gender roles in your home. If you feel like weighing in, please take this survey (you can win some cool fit stuff if you do!), and feel free to share it with your friends. We’ll be incorporating the results into an infographic in the weeks to come!

Do your feminist (or anti-feminist) views influence your feelings about cooking? How so? —Kristen