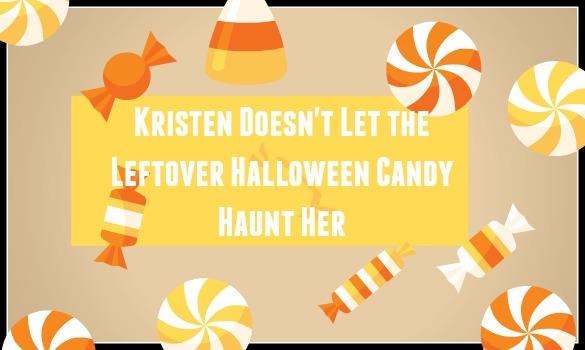 I’m not a huge candy eater. It’s not that I dislike it, but I don’t generally find myself craving, like, Snickers or anything. If I’m having something sweet, I’d generally prefer a cookie or some ice cream or something with a little more … I don’t know, substance, I guess?
But, I mean, Halloween is different. And it’s not like Halloween is just a day, right? It lasts for as long as there’s candy in the candy bowl!
I planned pretty well this year, and we had just a few pieces of candy left over (two KitKat and a Reese’s Peanut Butter Cup), but still, I didn’t want to shove it all down my craw by lunchtime the day after Halloween. So, I figured, what better day to document my food for a day than on a day when I could use a little extra accountability?
I made breakfast (part one) around 5:30 in the morning and ate it on the way to the pool for the final outdoor morning swim of the season. (Don’t feel too sorry for me — the pool will be open year round; just not at 6 a.m. because, well, it doesn’t seem to be all that popular as the weather cools down, as you can see.) 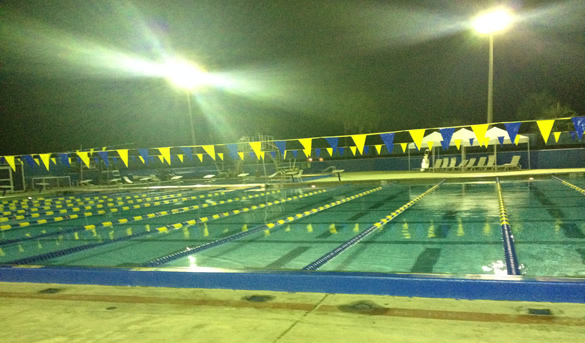 Not the most popular place to be at 6 a.m., apparently. Who’d have guessed?

This quickie breakfast was a slice of Ezekiel Bread with Nocciolata hazelnut spread (review coming soon!). And water. Lots of water. 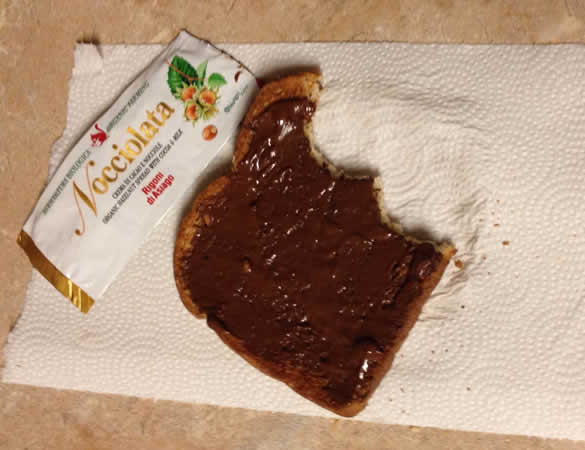 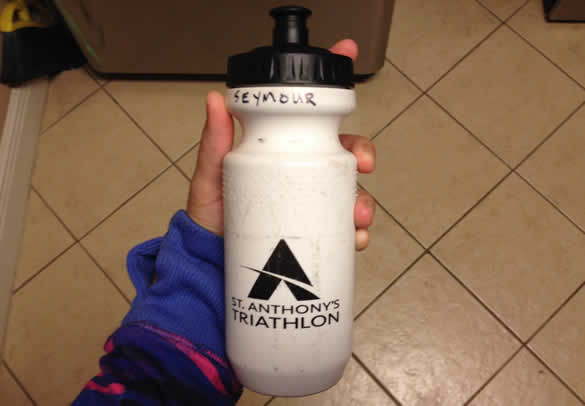 It’s crazy how thirsty swimming in a pool of water can make you.

Immediately following my swim, I ate breakfast part two: a Macintosh apple (which is basically everything an apple is supposed to be — if you don’t know what I mean, go get yourself one. It’s cool. I’ll wait!) in the car on my way to a massage therapy appointment (now for both my jaw and my knee — fun times! Also: OUCH). 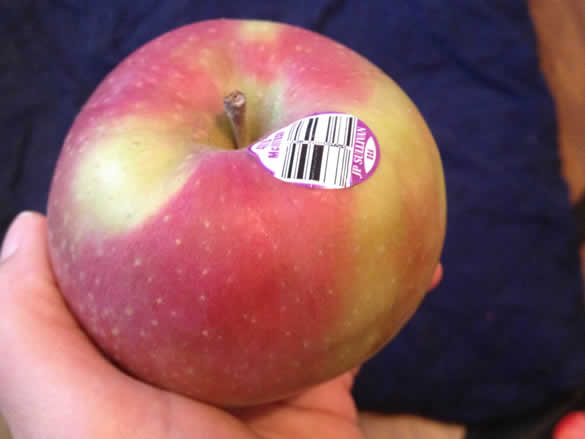 Confession: This is not the actual apple I ate, but a picture of a half eaten apple in a dark car doesn’t exactly scream “blogworthy,” you know?

I got there a bit early, and Starbucks was right there, so I had a tall PSL with two pumps (they come with three, normally). It was a little too sweet for me, still — I generally get a larger size with two pumps, so I guess if I ever get an itty bitty latte again, I’ll know to just get a single pump. Lesson learned, ‘bux.
(Fine, let’s be honest — this was my first time getting the smallest size and probably my last. I just sip them down too fast!) 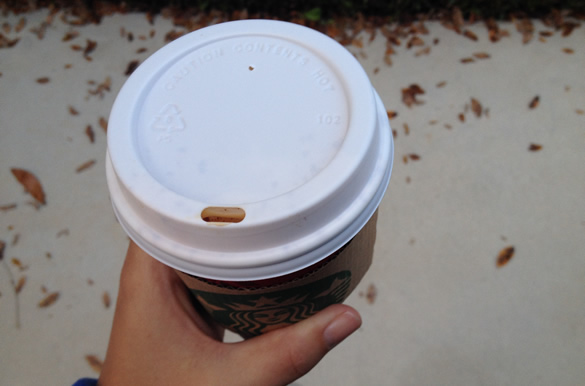 My massage was over by 9, so I headed home for work and some conference calls, but by the time I finished my last call around 11, I was starving. I didn’t want to have a big lunch yet, so I mixed up a smoothie with Greek yogurt, OJ, pineapple, mango, kale, chia seeds, flax seeds and hemp protein powder. And then I almost drank the whole thing before I remembered to take a picture. 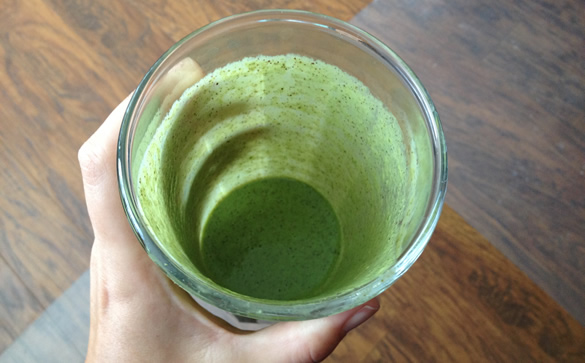 I spent an exciting hour or so knocking out some editing assignments, then gave in to the idea of lunch. Sometimes I get really excited about a simple meal, and this was one of those times. I’d been picturing this hummus and veggie wrap all morning, and it was time to make it happen. 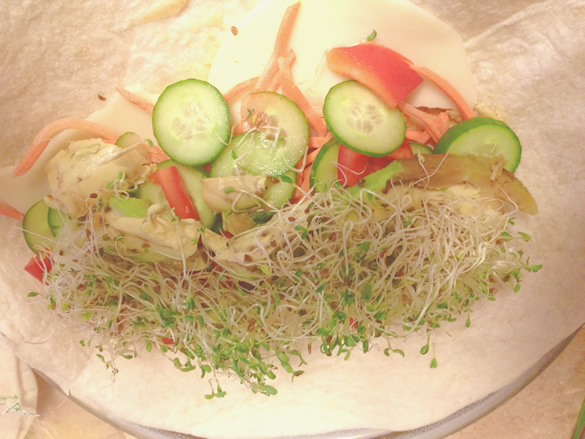 Step 1: Spread Trader Joe’s cilantro jalapeno hummus on a tortilla, then top with ALL the veggies (I recommend carrots, cucumber, alfalfa sprouts, red pepper, and then maybe some cheese). 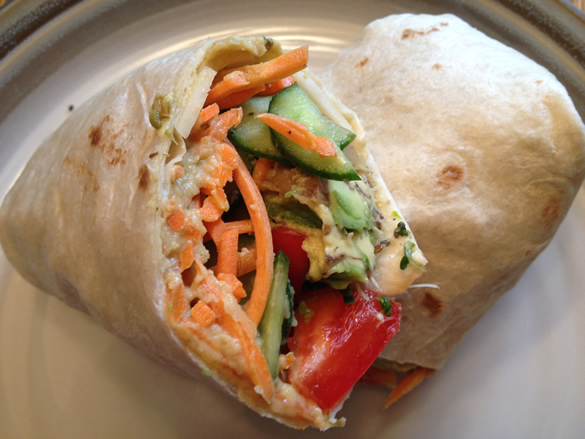 Step 2: Wrap that thing up and EAT.

My husband and I split a soft pretzel one of our friends had made for Oktoberfest. He used our mixer, so it’s only fair that we get a few to keep in the freezer, right? But, in all honesty, it’s all about the spicy, horseradish-y mustard for me. YUM. 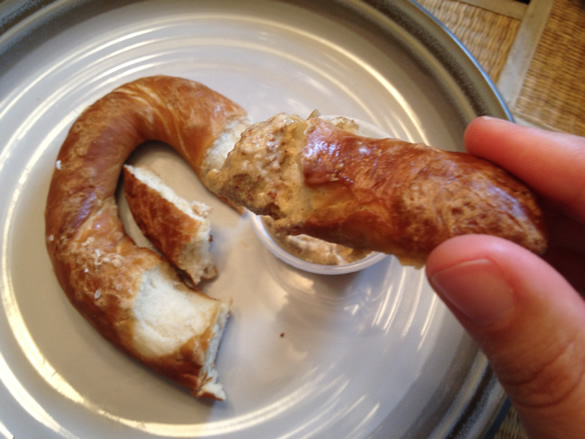 What type of mustard do you prefer for pretzels? This is a big debate in our house.

At this point, I’ve walked by our nearly-empty candy bowl about six kajillion times and decided I probably needed to have a KitKat. You know, to make sure it was still good. I split it with Jared because I’m basically the best wife ever. 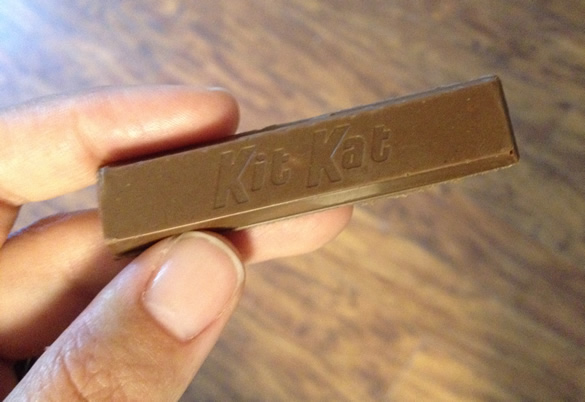 As I uploaded this picture, I started humming the old commercial: “What would you do-OO-oo … for a KitKat bar.” Except I then realized it’s Klondike, not KitKat. And dammit, now I want a Klondike bar.

Once I wrapped up my work for the day, it was time to head out on the town (but not without a quick snack of roasted almonds for the road). 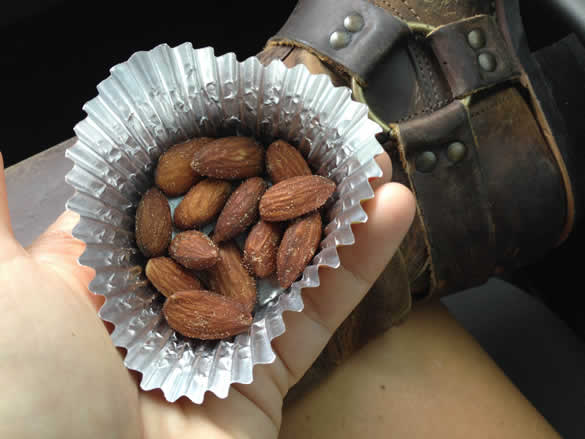 I had an appointment downtown, and Jared wanted to pick up a couple of six-packs of local beer for a football-watching party the next day, so we decided to make a date night out of it. First, we stopped at Swamp Head Brewery, a local craft beer brewery that opened not all that long ago, but has already made a BIG impression all around Florida. We both opted for “migrational” beers that might not be there the next time — I had a pumpkin beer and Jared had a red ale (yes, really, just one — we had places to be!). Both were definitely winners. 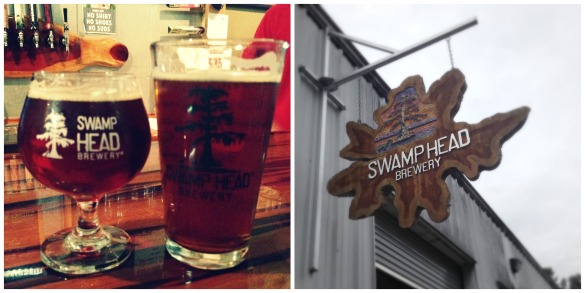 If you find yourself in Gainesville and thirsty, this brewery is well worth a stop.

From there, I went to a quick hair appointment, and then it was over to one of our favorite Gainesville restaurants, The Top. I ordered a Prairie Bison martini while we waited at the bar — it was delicious, but I had to pull more shreds of arugula out of my teeth than you’d expect from a mixed drink.

You’ll have to settle for a blurry shot of the menu; the bar was pretty dark.

Then, it was time for dinner, and we were both nearly hangry. But some ridiculously delicious corn nuggets soon fixed that. 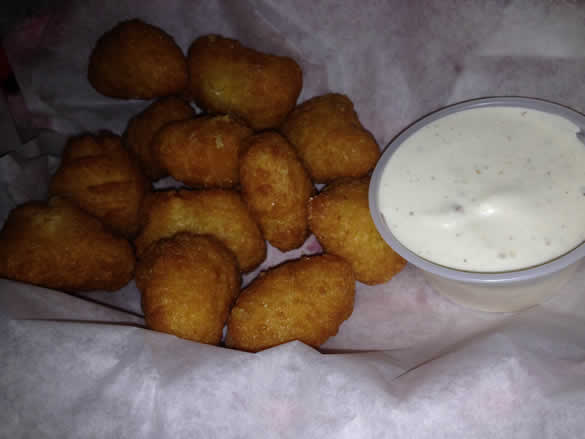 While I was really trying to go with a salad, I found myself really craving their pesto melt sandwich with blackened tofu and a whole heap of veggies. Delicious. (The sweet potato fries were more than okay, too.) 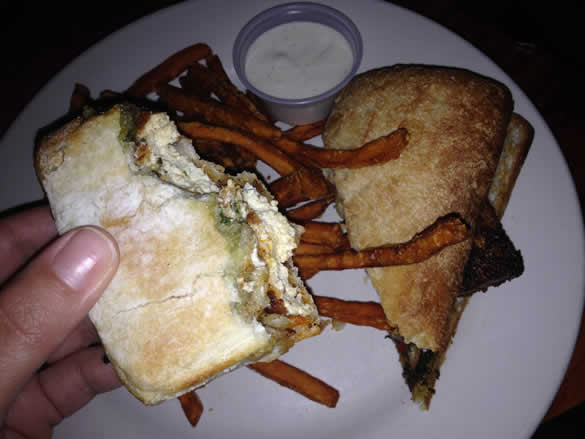 Not pictured: The pumpkin TCBY fro-yo I picked up on the way home. I’ll just have to rely on my tastebuds for that memory!
This was one seriously delicious day of eating, and it made me realize that it’s not too hard to stay out of the candy bowl when you have so many other amazing things to chow down on!
Are you a candy eater? Or do you also prefer other sweets (like pumpkin fro-yo!)? —Kristen
New Fitness
New Mamas
New Eats
New Zen
Free Email Course
Take the FREE 5-Day FBG Reset Email Course