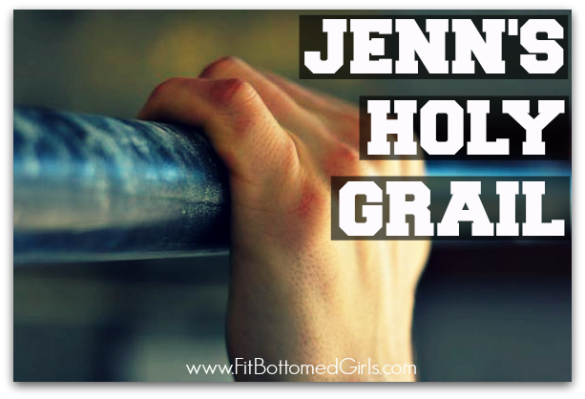 I remember when the movie G.I. Jane came out. (Am I dating myself here? Oh, God, I totally am.) I was enamored with it. So much so that I went as G.I. Jenn for Halloween that year. (Clever, I know.) Up until that point in my life I’d never really seen women doing pull-ups and push-ups like a dude, and the whole concept of a woman breaking into an all men’s club and proving she was just as capable just got into my teenage soul and made it swell with pride and girl power. (Kristen and I clearly would have been girl-power friends in high school.) And over the years that movie — and the image of Demi Moore rocking pull-ups — has stuck with me. It became almost a fitness holy grail.

But not in a I-can-do-that holy grail sort of way; more in a I-think-people-who-can-do-that-are-bad-ass sort of way. But me? Not so much. And so I went about my life and workouts, doing some push-ups on my toes and jumping on the assisted pull-up machine, but the closest I ever got to being G.I. Jenn was that costume and the occasional boot camp class.

And then this happened. And I saw real women doing real pull-ups. And something in my brain just clicked.

And so, over the course of a year (that’s a long time, people!), I built the strength to be able to do a real bona fide kipping pull-up. And then, the strength to do a bunch of them with breaks in between. And then, knowing that G.I. Jane really did deadhang pull-ups, I set out to do one of those, too. And now — two and a half years later — I can do like three in a row.

And I don’t even have to make that ugly of a face to get there. Holy grail, found.

I’m not telling you all this just to pat myself on the back (although, hey, all of us could probably do that more often — as women we tend to downplay our power and our accomplishments). I’m telling you this because I guarantee whatever “crazy” thing that someone else can do in the gym or on the silver screen — that big amazing thing that you admire — well, if you really put in the time and effort you can probably do it, too. Maybe not always as quickly or as awesomely as they do, but if you really go for it, you most likely can do it or get damn close. And I promise the pursuit of doing more than you think possible and the feeling you get after reaching that goal is totally worth it. No matter how long it takes.

What’s your current fitness “holy grail”? What moves do you want to master? Anything you’re dreaming of doing in the gym? And if your fitness holy grail is doing a pull-up, too, check out this guide I wrote to doing one! —Jenn

Add a comment Cancel reply
11 Comments
Jenn & Kristen
Diets don‘t work. We know because we‘ve been there.
Get the deets
STAY IN THE KNOW
When new stuff happens, you'll be the first to know!
Latest Offer
Working out at home
Get free strength, cardio, yoga, and meditation videos.
Try them
Instagram
X