On a recent Southern Caribbean cruise, Bill and I took the “When in Rome” attitude one step further than usual. While most passengers disembarked the ship to simply enjoy the trade winds on the white sugar-sand beaches of Curacao, we headed out on the ultimate shore excursion: an afternoon at Angelica’s Kitchen, a local cooking school.
I couldn’t resist the idea of cooking authentic island cuisine in a historic Dutch Colonial mansion, and I wasn’t the only one. In a small neighborhood, just past the colorful shoreline, near the capital of Willemstad, we met up with 12 other travelers who had also given up one of their vacation days to work in an island kitchen and prepare their own meal. Crazy, right?
Upon our arrival, Clarita, the head chef, instructed us on the island’s gastronomy. 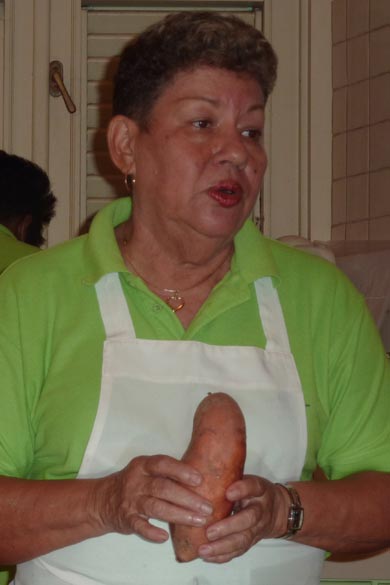 Although much of the food consumed on Curacao is imported, they do raise goats, chicken, iguana, rabbit and pig. Thanks to the dry climate and sandy soil, crops are limited, but they do cultivate a few grains, okra, pumpkin, cucumber, peppers and tropical fruits. Our evening’s four-course menu would be reflective of the local harvest.
Before we broke into workgroups, Clarita opened wine, cranked up the stereo and filled the kitchen with the sounds of a steel drum band. In Angelica’s Kitchen, Clarita explained, music and dancing were mandatory — drinking optional, but highly recommended. We embraced the vibe and got to work. 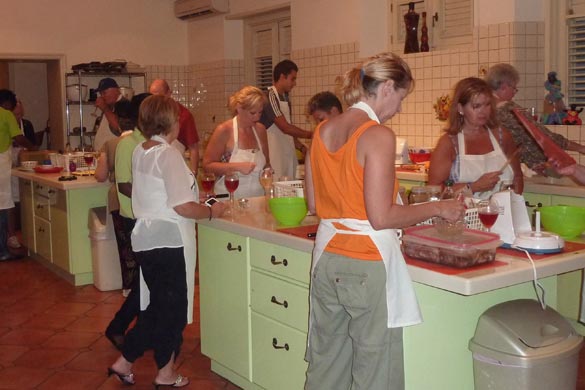 That’s me in the orange, working on team chicken. Notice how no one veered too far from their wine glass!

We snacked on fried plantain chips accompanied by a cool tomato-cucumber salsa as we danced/cooked the afternoon away. After three hours of slaving in a hot Caribbean kitchen we were finally ready to dine.
Our feast began with a sweet potato/plantain soup that oozed hints of cinnamon and curry. It was slightly sweet and, although relatively simple, seemed extravagantly exotic.
Thankfully, the entrée we prepared was not yuana, the popular iguana stew. We opted instead for a heavily spiced, smothered chicken that, when served over rice, combined all the cultural influences of the island — Caribbean, Creole, Indonesian and Spanish. It barely left room for dessert, but somehow, we managed to scarf down pumpkin pancakes served with ice cream and Genuine Curacao Liquor made from the indigenous bitter orange fruit of the island.
While my shipmates were sitting down to another white-linen meal, our little group of wannabe chefs was enjoying the last of the wine on a whitewashed patio, underneath a starry Pacific sky. It just doesn’t get any more real than that.
Would you spend a vacation day cooking with a local chef? —Karen
New Fitness
New Mamas
New Eats
New Zen
STAY IN THE KNOW
When new stuff happens, you'll be the first to know!