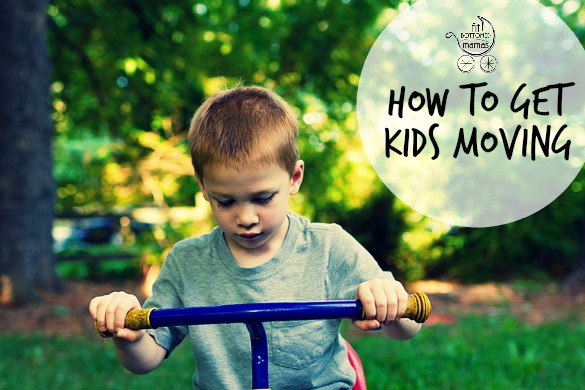 Anyone who has kids knows that they are pretty much born to move. From the moment they can hold up their heads on their own, they’re on a mission to roll, crawl, toddle, walk and climb their way to mass destruction. They’ll throw balls until exhausted. They’ll go down slides a million and one times. They’ll imitate parents and join in on workouts. They want to go outside to play all the time. (My daughter, when it’s pouring down rain and like 35 degrees: “Can we go outside yet?”) They will run in circles indoors if it’s too cold to go outside — run in circles until they’re dizzy and falling down.

So what happens that makes them, and us, stop exercising? What makes it stop being fun to run around until we’re dizzy? Walk around exploring the neighborhood just because it’s there? It’s definitely happening; a recent Time article reported that not even a quarter — only 24.8 percent —  of U.S. kids are getting their recommended 60 minutes of moderate to vigorous activity each day. It also reported that more boys were active than girls, and that as weight increases, the amount of exercise decreases.

It’s been so cold here that I’m sorely missing my mornings — and afternoons — outside with the kids. Both the kids and I go stir-crazy if cooped up too long. And even though we’ve been hitting the gym regularly (I can work out, they can run like maniacs in a rubber room), I love that extra sunlight and warmth to let them run around like crazy people outside, without fear they’re going to fall off the couch they’ve been climbing even though they shouldn’t. As my kids get older and other obligations creep into our lives —  homework, friends, technology — I don’t want to forget that outdoor fun; that time spent taking a walk instead of sitting on the couch, that time spent learning to ride a trike. I want to continue to encourage them to get outside and make fun happen. Just like we are always saying to find something you love to do and just move, exercise for kids should be just as simple: just let them be kids without a screen or device to entertain them.

How do you encourage your kids to exercise? —Erin