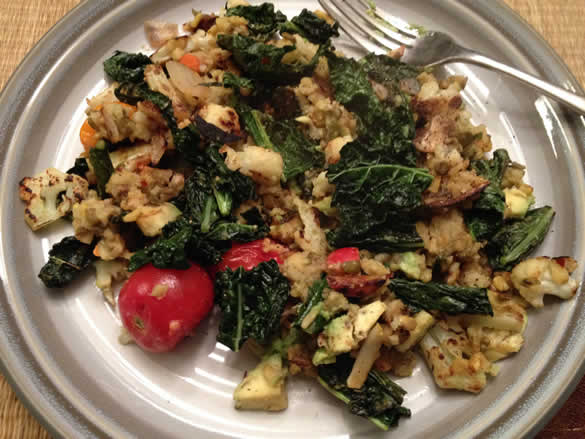 Each night I ate the Kitchari, I added new and different veggies. Tiny tomatoes, loads of greens and cauliflower from the farmers’ market, along with onions and carrots was my favorite combo.

The first few days were fairly easy, if a bit heavily structured. That being said, I work from home, so other than the fact that I had to actually take a break from work in the middle of the day (gasp! the horror!), things weren’t too rough. Evenings were a bit more difficult for me — I like having something sweet after dinner to signify it’s over, and since fresh fruit was out along with sugar, I made due with ginger tea, which is good, but not the same.

If I had a more regimented work schedule, mornings would have been hard — there’s quite a bit to be done before starting your day (meditation, yoga, journaling, hot-water-with-lemon drinking, not to mention making breakfast). Depending on what time you have to leave for work, you simply might not be able to wake with the sun and still squeeze it all in.

Now, lest you think this was a cakewalk filled with sunshine and unicorns for me, it wasn’t. In fact, I had to omit one entire day in order to fit everything in on days when I could, at least for the most part, follow the schedule. Plus, I wanted to schedule my all- or mostly-juice days for dates when I could truly keep my activity level low to give myself the best chance at success.

I did not cheat on the dietary portion at all until the second-to-last day, when I added an egg to my Kitchari after craving protein like a madman, but I wasn’t perfect about adhering to every beauty and pampering ritual listed. (There were a lot of baths, and I’m really not a bath person. Partly because our tub is so small it’s impossible to have your knees and your shoulders in the water at the same time, but also, I can’t stop thinking about the fact that I’m just going to have to clean the tub after I’m done, which is not relaxing.)

I had hoped that the clean diet along with the focus on reducing stress would help out my TMJ, but I didn’t notice any improvement. Although it didn’t hurt it, either.

In the book it states that some people feel increased energy, while some feel more tired. For the most part, I fell into the latter category, but that being said, I tended to wake feeling refreshed and energized, so that might just mean that I need a little more sleep than your average bear.