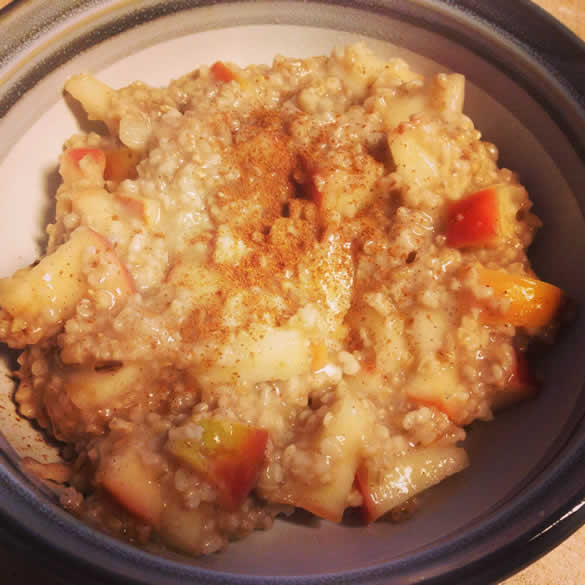 While there were times when I found following the schedule to be a pain, this showed me that I’m absolutely capable of making time for myself — for meditation, for a longer, more relaxing shower, for making a real lunch with fresh ingredients that I actually cook on the stovetop instead of the microwave. I didn’t fall behind on any work, and, in fact, I think I was probably more productive during the hours I put in having taken a break now and again.

I also acquired some habits that I’m kind of excited about. I seriously enjoy my hot water with lemon in the morning, especially on early, cold mornings when I’m heading to the gym long before sunrise. I’ve also developed a bit of an obsession with ginger tea and drink it a couple of times a day, easily. It’s delicious and good on my tummy. I’m throwing a wider variety of seasonal vegetables into all kinds of meals — once I tried it with Kitchari (which I’ll continue to make now and again), I realized that I was really missing out on some of those lesser-known greens!

I found a new smoothie recipe that I love (my actual words after making it were, “Oh my God, I would totally make this on purpose!”) — it has pineapple and carrots and lime and cayenne pepper and it’s amazing. I realized that steel-cut oats with just some chopped apple (Gala or McIntosh, not Granny Smith — trust me on this) and a bit of cinnamon is a delicious start to the day. And I learned that as much as I love celery, I do not enjoy it in smoothies. Nope. No way. Not at all.

Meditation and journaling has fallen a little to the wayside, but it’s not gone. I’m still getting it in here and there, and will work on building back up to a daily practice. On the plus side, I also have had zero cravings for beer or wine and only a little for caffeine. I’m not saying that’ll last forever, but it’s nice for the time being.

Oh, and in case you wondered, I dropped six pounds … before the all-juice day. Sure, it was mostly water weight, but that’s also an indicator that I what I’d been eating was holding in a lot of water, you know? Still, I think the biggest takeaway was that the weight loss was almost an afterthought compared to feeling better and feeling like my eating habits had been reset back to a “normal” I can live with.

Have you ever tried a cleanse along these lines, with more of a mind-body focus than a “lose weight now!” type of  angle? How did it go? Did you gain any new, healthy habits? —Kristen