We’ve been pretty mum about the whole The Biggest Loser finale Rachel Frederickson thing. But that’s not because we haven’t had thoughts. Oh, no. SO MANY THOUGHTS. I chatted with the girls about it, and, well, there’s just been so much to consider. And so much to say. And so much speculation. But as huge fans of the show — and of Rachel (her story was so inspiring) — I wanted to take time out to say something. Actually, a lot of somethings. 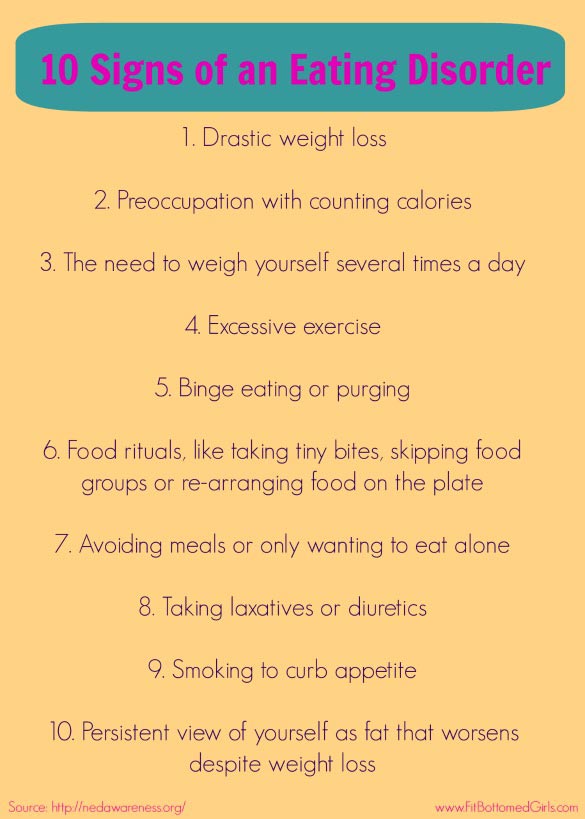 Now, I think these signs are important and powerful to know — both in recognizing warning signs in our loved ones and ourselves. I know that in my pre-FBG past, I’ve been guilty of no. 1, 2, 3 and 5 … so I get it. I really, really get it. And a lot of times when you’re in it, you’re not even that aware of how disordered it actually is. It’s not a happy place, but it’s your life — and it’s your obsession.

Now in the case of Rachel Frederickson, I’ll admit that when I saw her at The Biggest Loser finale I was shocked. Appalled even. She just looked so fragile and thin and bony. But the moment that I had that thought, I stopped myself. Because, really, none of us know what’s really going on in Rachel’s head. From the facts, a 155-pound weight loss does go under “drastic,” yes. And I think anyone on The Biggest Loser could be considered as doing excessive exercise. But the rest of those signs? We just don’t know.

What I immediately became concerned with was backlash and the impact of her image on the show — and all the girls watching. The day after the finale, this Bustle post went live, and it really, really got me thinking (and worried). How many women and girls looked at her and wanted her body, her look and that amount of skinniness, no matter the cost? Speculation of her headspace aside, there’s no doubt that her being crowned as The Biggest Loser and on such a national stage says something to many.

There have been a lot of really good posts written on the whole thing. And the story seems to keep evolving and unraveling as Rachel has now admitted to taking it too far and the show’s producers are now considering tweaking the format. I’ve long been uncomfortable with the show’s focus on the scale — and the lengths some contestants go to win. So I hope this does result in some changes. I’m not sure how to fix it, but I hope it can be changed for the better because, all in all, the show is SO inspiring.

I also hope that Rachel is truly healthy and happy because she deserves it. Living on the extremes — either too thin and restricted and controlled or overweight and completely out of control — are both unhealthy. Neither is a happy place. Neither is a healthy place. Neither is a feel-good place to live. And I’d hate to have Rachel or anyone just go from one extreme to the other. Or, in the media’s insistence that she does have an eating disorder, push her into either really having one or gaining all the weight back. I mean, can you imagine being in her shoes? That pressure … and it’s all on how you look. She used to hide behind her weight and here she is for all of us to see … and, well, the world still isn’t a happy and friendly place.

Only time will tell how this all plays out, but I hope that this whole thing sparks more discussion and a true appreciation for health at all sizes. And I’ll be super curious to see how this affects the next season …

Later today we’ll have another post on what to do if you think your friend has an eating disorder, but for now, tell me: what are your thoughts on this? —Jenn