Jenn has a point in that just the word “CrossFit” is totally intimidating, but I’d wager that many people feel the same way about triathlon. When the uninitiated picture the sport, they probably picture hordes of uber-fit people on $9,000 bikes (which they totally pee on). They might picture the elite athletes who train year round and still stumble through the finish line at Kona, which, of course, is one of the few opportunities they might have to watch a triathlon on TV. They might picture triathlons full of people who don’t find a marathon, on its own, to be enough of a challenge.

I’m not going to say you won’t find those things at your first triathlon, but here’s what’s important — you’re going to find a whole bunch of people who are far more like you than like the pros. Sure, there are people there who are in it to win it, but the vast majority of the athletes are there to do the best they can and have a great time. That’s not so scary now, is it? 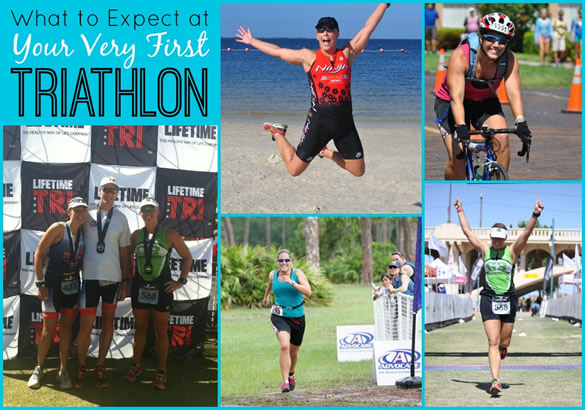 If nothing else, you can expect a lot of smiles!

What to Expect at Your First Triathlon

1. It’s going to be crowded. The transition area, which is where you’ll set up your bike and running gear, is going to be a busy place right up until they force everyone out for the start of the race. You’ll have a set area that’s all yours, though, so don’t stress out about all the people. Just set things up the way you’ve planned and you’ll be all set.

2. You’ll probably forget something you wanted and end up with something you don’t need. Triathlon often involves a whole lotta gear. It doesn’t really have to — you can generally get by with goggles, a bike and helmet and some sneakers, if need be (although I’d highly, highly recommend having a water bottle and sunglasses for the bike). I’ve forgotten my watch, sunglasses, even to use my asthma inhaler, and it’s all worked out. So, plan as best you can (a packing list is a super smart idea), but try not to freak out if you don’t have your favorite flavor of Gu on hand.

3. The porta-potty situation is not for the faint of heart. You’ve got a giant group of athletes, all of whom are nervous, hydrating and possibly drinking coffee. You know what that means. So, three pieces of advice: Take a deep breath before you go in, look before sitting or squatting, and always, always pack your own toilet paper. Otherwise, you’re almost guaranteed to find a porta-potty with no TP. And that might be best case scenario.

4. You will get bumped in the swim. Depending on how the start is set up (most start in waves, some are a mass start), you may end up getting into the water with a bunch of people. If you’re competitive in the swim and pushing for the front of the pack, you’re likely to take a few kicks from your fellow triathletes. But if you stay a little closer to the back of the pack, or stick to the outside of the route, it’ll take you a little longer but you’ll have a far more peaceful swim. And remember, there are always safety personnel out on the water to assist you (and resting a moment on their kayak should not incur a penalty). The swim does not have to be a scary place, I promise.

5. You’re going to have a moment (or 10) when you promise yourself that, if you just finish this one race, you never have to go through this nonsense again. Hell, this isn’t even just a beginner thing — I did this in my most recent race! There will be moments that are harder than you expected them to be. It will hurt, and it will test your mental strength just as much as the physical. But that’s what makes that finish line so, so sweet. You trained hard for this, and if you can learn to appreciate the difficult times as much as the post-race banana (or beer, whatever your pleasure might be), you’re going to be able to break down a lot of barriers.

6. You’re going to come up with a 100 things you want to do differently next time. Pretty much nobody nails anything their first time around, right? And that’s okay — room to improve.

7. There’s going to be a next time. I know very, very few people who have done one triathlon and never come back to the sport. Some sign up for another race that same day. Some need a little more time — maybe even a couple of years — before they’re ready. But they almost all come back.

8. You might cry. This stuff is emotional, you guys. And it’s not just the intensity of what you’re doing and accomplishing (although that’s gotten me to choke up a time or two) — it’s your fellow competitors. None of those people are there because they’re interested in a lazy Saturday on the couch. You’re going to see people leaving everything on the course. You’re going to see people celebrating all manner of things. Just a few of the people I’ve talked to during or after a race have been there because:

And do yourself a favor — stick around for the last few people coming through the finish line. Those are some of the people who make this sport so damn cool.

10. You’ll have a moment of “What the …?” as they pass you, and then you’ll find yourself grinning like an idiot. Because, A) That’s awesome, and B) That’s wicked inspiring.

11. You won’t have the best or the worst equipment. Yes, there will be people there with bikes and gadgets worth more than the cars many of us drive. There will also be plenty of people there with old road bike and borrowed mountain bikes. There will be people in pro-level wetsuits and people in bikinis. You’re pretty likely to fall somewhere in the middle (kind of like in group exercise classes).

12. You’re going to find a community. I suppose it’s possible to do a triathlon and not make a friendly acquaintance, but I’ve never done it. Triathletes tend to be a pretty welcoming group in my experience. If you stop to walk, don’t be surprised if someone encourages you to keep going. If you have to stop to stretch out or get a cramp under control, it’s likely you’ll have at least one fellow racer stop to make sure you’re okay, and maybe even offer you a Gu or some water. If you’re like me, you’ll quickly find yourself doing the same thing for others. It’s just impossible not to be swept up in that kind of an atmosphere!

That being said, not everyone is always Mary Sunshine. People get nervous, and it’s possible they’ll take their nerves out on others. If someone is snarky or downright mean to you, do your best to shake it off — I can almost guarantee you that their beef has nothing to do with you and everything to do with them. They don’t deserve any space in your head, especially not on race day.

13. You’ll want to tell someone (or maybe everyone) every detail of your race. Going through a race that really challenges you leaves you feeling changed somehow, and that’s the sort of thing you want to talk about. Hopefully, you have some friends or family who are willing to listen, but if not, find yourself a local (or online) tri club. Triathletes love to talk about race strategy, training plans, race recaps, nutrition, you name it. You’ve found your people — now chat it up, embrace them and get ready for your next race!

I’m certain there are some really important tips that I left out. Fellow triathletes, feel free to speak up about whatever I forgot! —Kristen