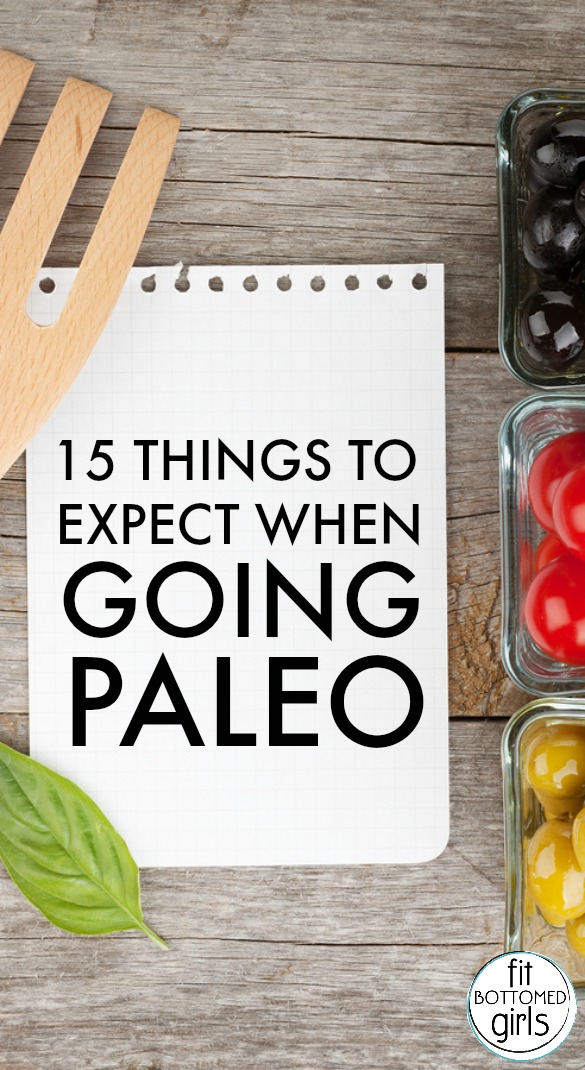 I already shared my thoughts on what to expect in your first CrossFit workout, so I thought I might as well do this post as a part two to that, since many CrossFitters who get into it do at some point go full Paleo, part-Paleo or at least try Paleo for a bit. I’ll go ahead and confess that it’s pretty restrictive and it’s not for everyone — but for those who eat this way, they do it because they love how it makes them feel and how it helps them perform in the gym.

I’m about 80 to 90 percent Paleo myself and have been for going on two years. And while I’m no die-hard (Wine! Chocolate! Corn tortillas!), I do feel my best when I’m eating mostly veggies, high-quality proteins and good fats like nuts and coconut. In past posts I’ve shared my experience with my own 30-day Paleo challenge and the good, bad and ugly of going Paleo (note: if you have a slightly disordered relationship with foods or are prone to yo-yo dieting I do not recommend trying to go full Paleo — ease in, see how you feel and adjust as necessary). But if you’re going to try it, here are 15 things to expect!

What to Expect When Going Paleo

1. It’s not a diet. Going Paleo truly is a lifestyle. It’s not a yo-yo diet, and it’s not about counting calories or deprivation. It’s truly a philosophy on eating the foods that our ancestors ate — and that our systems are designed to eat. (For lots more info, I recommend reading this book.)

2. You may lose weight, but that’s not what it’s about. Although it’s not a diet, many people report losing weight when going Paleo. But that’s just a bonus. Going Paleo is more about eating and living optimally — not about what you look like. Sarah Fragoso of Everyday Paleo put it best in a session I sat in on last year: “Healthy by choice. Hot by accident,” she says.

3. You’ll poop better. I won’t go into specifics, but just know that once you get used to it, your poop will be pretty epic. Like, you’ll be tempted to post about it on your Facebook wall. And then not, because, um, that’s gross and even outside of the bounds of normal oversharing.

4. You’ll have more energy. Because you’re eating so many nutrient-rich foods (and pooping better!), you’ll sleep better and have more energy. Those afternoon energy slumps or sugar crashes are pretty much no longer.

5. You’ll get really creative in the kitchen. I don’t know a single Paleo person who doesn’t learn to love cooking eventually. There are tons of awesome Paleo cookbooks and blogs out there, and the best Paleo meals you’ll eat will probably be made at home. You’ll find ways to still make pizza, cookies, pasta — all of it, with your very own Paleo twist!

6. Eating out will get pricey. You can totally eat out — in fact, most good restaurants are full of Paleo-friendly options. Salads, steak, seafood — all Paleo. Normally though, besides salads, you’ll be ordering the special of some kind, which is damn tasty but never cheap.

7. A lot of people will think you’ve gone crazy. You can’t eat beans? Dairy? Whole grains like brown rice and wheat? However will you live and have the energy to do anything?! It’s kind of the same attitude vegans and vegetarians get, just with a different twist. While you can try to tell people about all the science behind going Paleo and how you’re getting plenty of carbs and vitamins and minerals from veggies, tubers and meat, I find it’s just easier to say, “Eating this way makes me feel really good. If I felt deprived, I wouldn’t be doing it!” Not much anyone can say to that.

8. You’ll never look at breakfast the same way again. I have brinner all the time, and I’ll routinely eat dinner leftovers for breakfast. Most of the common American breakfasts aren’t very Paleo (yogurt, cereal, oatmeal), so unless you have the time to whip up an omelet every morning, you start seeing meal times as more time to just eat whatever sounds good — not what most people consider “breakfast.” For the record, a little bit of steak and a sweet potato is a pretty rad way to start the day.

9. It is an adjustment. While some people jump cold-turkey into going Paleo, I prefer a more gentle approach where you cut one thing out, see how you feel and get used to it before cutting something else out. I never had any “detox” effects from going Paleo since I eased in so slowly, but others I know have had a few days of cravings and low energy to get through. (I think that’s probably mostly to do with cutting out sugar, but that’s just my two cents.)

10. Your meals will be DELICIOUS. Remember all that cooking I told you’d be doing and those fancy dinners out? I swear, Paleo eating is just darn tasty. When you go Paleo, you put more time and effort into your meals and your decisions of what to eat and it typically shows!

11. You’ll eat lots of fat. Paleo peeps love their dietary fat! Most of us are afraid of eating too much fat, but fat is a necessity in the Paleo diet, and I like having some in every single meal and snack I eat. Do not fear the fat — it’s awesome fuel!

12. You’ll be full. Paleo is about eating when you’re hungry and stopping when you’re full. Between the satiating protein you’re eating, all the veggies and the fat (coconut, nuts, avocados, eggs, meat, etc.), you get full fast. And cravings for all of the processed stuff really do diminish if not disappear altogether.

13. You’ll find a community, and it will be awesome. Similar to how Kristen said triathletes are, Paleo is a community that loves to talk about, well, itself! So whether it’s online, at your gym or through a Paleo cooking class or event, you’ll probably find a new Paleo BFF to swap recipes with.

14. You’ll go off every now again … and feel pretty terrible. Perfection is for the birds, and sometimes you’ll decide to have the piece of cake or slice of pizza or whatever you want. But, truth: You’re probably going to feel pretty crappy after you do it as your body won’t have a clue how to process it. Not so much that you’ll never go off Paleo again, but enough so that when you do, it’s for something really, really good or special.

15. You’ll find what best works for you. Yes, there is only one way to “go Paleo.” But, you know, it’s your life! And you get to decide what eating plan is best for you. Maybe that’s always eating Paleo at home or being Paleo 100 percent of the time. Maybe you’re like me and eat Paleo 80 to 90 percent of the time and splurge on non gluten-containing foods (for me, dairy is okay now and again, but gluten does bad, bad things so it’s a non-negotiable). Through trial and error, you’ll settle into your way of eating that makes you feel awesome but that is also livable for your life.

Have you been curious about going Paleo? Paleo peeps: Have other things you’d add to my list? I’m sure I forgot something … ! —Jenn

Add a comment Cancel reply
13 Comments
Just for You
Drop the diet for good
A variety of anti-diet coaching programs just for you.
Get free access
STAY IN THE KNOW
When new stuff happens, you'll be the first to know!
About Us
Jenn and Kristen are passionate about letting women know they're more than a number on the scale.
Get the deets
Instagram
X