I’ve competed in a lot of races, and part of what keeps me coming back, even after a really heinous one, is the community. Whether it’s a 5k or a half marathon, I always — always — run into a someone going above and beyond to make the experience the best it can be for those around them. They encourage their fellow racers, they celebrate with runners who come through the chute with nobody there to meet them, they share their Gu with someone who’s cramping. They’re the best.

Then again, there are also people who … well, aren’t the best. Some are innocent but clueless, and some are just not very nice. But after spectating the end of a race where several of my friends were participating in different distances and at different levels, I thought, You know, I should put something out there. People might not even know they’re showcasing poor etiquette or rude behavior. And so, here’s what I have to say to my fellow racers. (Well, the ones who give a damn about making it a good experience for everyone, anyway.) 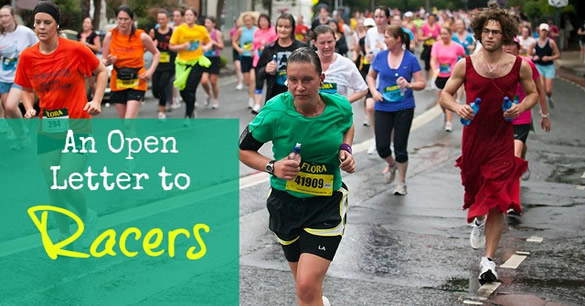 Racing brings out all kinds of runners. And, in the words of the weird Jimmy Dean Sunshine Guy: “You’re ALL awesome.” Credit: infomatique, Flickr

Hey! Congrats for being here! I don’t know whether this is an “A” race for you, if it’s a bucket list thing, or whether you just wanted to mix things up this weekend, but regardless, I think it’s rad that you showed up. Since you’re here, I thought I’d mention a couple of things you might want to keep in mind between now and that delicious post-race cookie.

Planning to run fast? Sweet. Get yourself up to the front — quick, like a bunny, now! — because there’s nothing more frustrating than having to weave your way past a bunch of people who are much slower than you because you opted to start near the back with your friend. Well, nothing besides maybe being one of the slower runners who gets elbowed out of the way by someone wanting to pass. Lining up by pace isn’t a perfect science, but you know about where you should start, so, you know, start there.

Same thing goes for more leisurely runners and walkers. I know you’re excited — you should be! — but if you’re going to hold a slower pace, try to start more toward the back. Yes, even if there’s no timing chip and you want a better finish time. That goes double if you’ve got a stroller or a dog in hand. Once the crowd dissipates a bit and everyone finds their speed, it’ll be easy to get around you, but right at the beginning when everyone is crunched together? Not so much.

Run/walkers: Hi! I love you guys. I am you guys. But I’ve also, at times, nearly tripped over you guys when you abruptly stop running and go to a walk in the middle of the road with no warning. A good rule of thumb is to stay over to a side and, as you’re about to slow to a walk, glance behind you to make sure nobody is right on your heels, or, if you can’t take your eyes off the trail, move as far to the side as you possibly can before slowing down.

Stuck behind someone? We’ve all been there. Usually, once someone knows you’re there, they’re happy to move over and give you room to pass, but if they haven’t noticed you, try a polite (but loud), “On your left!” If they have earbuds in and don’t hear you, a light tap on the shoulder and an, “Excuse me,” generally does the trick.

In one race, however, a woman who was going just about my pace (which is to say she wasn’t in position to, like, win) came right up behind a mother and son who were struggling to get up a fairly steep hill. Rather than giving them even a second to step aside, she screamed, “MOVE!” It was like a demonic voice coming from the depths of hell, and, unsurprisingly, they scattered. It was not the best thing I’ve ever seen at a race. But I’ll tell you one thing: I was really, really happy to pass her with about a quarter of a mile to go. (I did not yell at her to move, but it took some restraint.)

Racing with a group? Very little gets me as teary-eyed at the finish line as seeing a group of people who worked together to get through the race. That might mean they walked it. That might mean they carried someone part of the way. That might mean that they’re old friends and traveled across the country to be together for this event. Doesn’t matter — it’s awesome. However, if you’re in a group, try not to take up the entire width of the running area, as people might be trying to pass. And multiply that by, like, a hundred for the finisher’s chute.

At the race that was the impetus for this post, my friend was running the half marathon distance. A big group of women were walking the 10k. Both he and the group of women finished at the same time, and my friend, who had pushed himself for 13 miles, had to slow almost to a walk for the final tenth of a mile (at least until he could squeeze around them and run through the finish line). It was a little frustrating for him, and the elated group of women sashaying their way down the chute just didn’t have a clue. A quick glance around themselves near the finish would’ve made a big difference.

(Also keep this in mind if you’re trying to take selfies. I’m not going to tell you not to document your race, but make sure you’re not blocking someone else’s path before you stop to snap a shot.)

And one note for everyone: Everyone’s race is important. I don’t care if it takes someone twice as long as it takes you — it’s still meaningful to be out there. And you don’t know the circumstances — it could be really meaningful, like a celebration of beating cancer or the first time they’ve run that distance after having a baby, or maybe ever in their lives. You’ve got your goals, and I’ll certainly do my part to get out of your way if you’re going faster or, if you look like you’re struggling, give you some encouragement to keep going. It would be super if you could do the same for someone else.