Sometimes infertility seems like a little secret club. Current estimates put affected couples at 10 percent of the population, yet how often do you hear the words “infertility” said over dinner when out with friends? It’s just not something that’s talked about much.

(And I can relate — as I’ve admittedly been far more open about my fertility issues over the web versus live and face-to-face. It really is easier to be vulnerable when you can just hit publish and walk away, knowing your truth is out there, without having to actually answer questions, endure well-meaning but difficult comments or see faces of pity.)

Which is exactly why Elisabeth Rohm wrote the book: Baby Steps: Having the Child I Always Wanted (Just Not as I Expected). Best known for her role on Law and Order, Elisabeth began blogging about her family and struggles with infertility on People.com and later turned that experience — and her entire life — into a book. 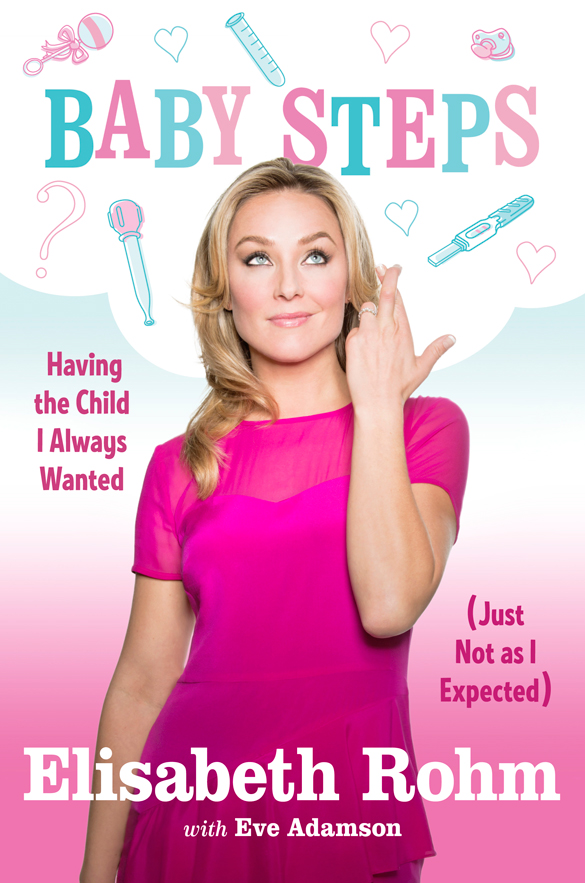 A book that touched a nerve in me. Okay, a lot of nerves. Elisabeth is incredibly honest, frank and sometimes downright crass as she tells the story of her life — from the relationship with her mom to the relationship with herself to the path she takes that eventually results in motherhood via IVF. Personal stories (and a little bit of name-dropping — there’s quite a bit about Hollywood) make up the bulk of the book, along with a strong call to women to share their stories, no matter what they are.

There are detailed sections on how the IVF process works, deep passages on “baby lust” that had me thinking (and crying) with their poignancy, and generally page after page that felt like Elisabeth crawled in my brain, settled in and then took copious notes. From the fear … the hopefulness … the heartbreak …. the loneliness … the refusal to give up. It was all there. Sometimes so much so that I had to put it down because it was just too real. Too me. But then she’d go into a past story about an ex-boyfriend or a story about her as a teen, and I’d want her get back to the infertility stuff. Because it made me feel understood, as raw and painful as it was.

So, yeah, this is no easy read, especially if you are having fertility issues. There’s nowhere to run from all of those feelings that come with infertility — which is her point. Not being able to conceive naturally doesn’t make you less of a woman or a mother. It’s not a shameful or embarrassing thing. But the only way to make that fully true is if we talk about it with each other and don’t treat it like some big dirty secret. And this book, by Elisabeth sharing her own journey, is an urge to begin and continue the conversation.

If you’re going through fertility treatments, have had miscarriages or are thinking of doing IVF, this book will be tough to read but important. If you’re a mother already, it’ll give you new insights into motherhood. In fact, any woman can relate to sections of this book as she also talks a lot about relationships of all kinds. And remember that 10 percent statistic? That probably means that someone you know is going through fertility issues right now and is too afraid or hurt to talk about it. That someone might even be you.