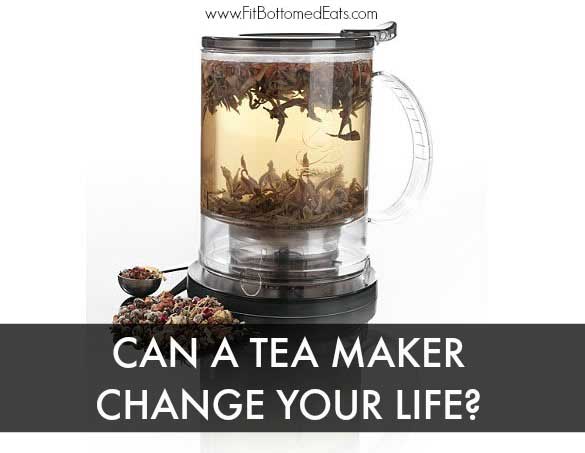 I guess it’s obvious that I like tea. Iced tea has always been a favorite (unsweet, though, por favor!), and since I’ve cut way down on coffee, hot tea (like ginger) has become a daily treat. But last month, just before my birthday, I had my eyes opened to a whole new world of tea.
My husband and I were killing time in the mall while waiting for my cell phone to be repaired, and we found ourselves walking toward a Teavana store.
“Do you want to go in?” he asked. I shook my head. I knew — I just knew — that if I went in there, I’d fall head over heels for some crazy expensive tea and then I’d decide I needed everything that could possibly go with it and next thing you know, I’d be walking home with $200 worth of monkey-picked oolong to brew in my new $85 cast iron kettle. I didn’t need it.
But then we walked by and the nice girl offered us a sample, and it was delicious. My resolve weakened and in I walked. I let the girl know that I really didn’t know anything about tea, and had just started drinking more, so, for one thing, I was going to need plenty of explanation on things, and for another, I didn’t want to spend a zillion dollars because, I mean, it’s not like I have a sophisticated enough palate to appreciate the uber-fancy stuff.
“What do you use to brew your tea?” she asked.
I responded by doing my best impression of a deer caught in the headlights and stammered, “Um, a pot? On the stove?”
Yeah, that’s not the right answer. Maybe you all know this, but that’s just called boiling water. If you’re using a loose leaf tea, you brew it in something before putting it in your mug. (If you’re using tea bags, you can just brew it right in the mug if you want, which is what I had always done, up to that point, hence my confusion.)
There were lots of fancy (and gorgeous!) kettles in which I could brew some tea, but I really didn’t see the point in spending a lot of money on something that I’d use for five minutes or so each time I made a cup. Happily, my friendly shopgirl had a great (and reasonably priced) recommendation: A PerfecTea Tea Maker, which quickly became an early birthday present.
It’s super easy — you dump your tea leaves in the main chamber, add your hot water, and let it steep in there for a few minutes. Then, you just put the Tea Maker on top of your mug, push down, and it fills your mug with the greatest tea ever in the history of the world. You can even save your tea leaves (or leftover tea, if you make more than one serving) in the container in the fridge for a day or so — your next batch will not be quite as strong, but it’ll still be tasty.
Plus? The loose leaf tea floating in the water is really, really pretty, and it all gets strained completely out when you fill your mug.
I did end up going home with some insanely delicious (and decidedly not cheap) Maharaja Chai Oolong — hey, it was for my birthday, right? And apparently it’s one of Oprah’s faves so clearly I just have amazing taste. Both my husband and I realized that, just as with beer and wine, sometimes you really do get what you pay for with tea, and sometimes it’s really worth paying a few extra bucks to get something you love. It was the most fragrant and flavorful tea I’ve ever experienced, and just a couple of ounces lasted much longer than I’d expected.
But the good news is that, although that particular tea is gone (for now, anyway — I might have to go back for more), my Tea Maker is still getting use daily. I ordered a wide variety of teas from this place at the recommendation of a friend and am just beginning to try those, but in the meantime, I didn’t hesitate to use my Tea Maker with the bagged teas I had in the pantry.
I never thought cutting back on coffee would taste this good, but I find myself thinking about what my next cup of tea is going to be. I’ll have one kind in the morning, and maybe another type in the afternoon, and often I still have my ginger tea in the evenings. This is nuts, right?
Do you get a little obsessive about tea? What’s your favorite kind? —Kristen
New Fitness
New Mamas
New Eats
New Zen
STAY IN THE KNOW
When new stuff happens, you'll be the first to know!