My friend Sarah is one of my favorite running buddies, but that’s not the only cool things about her. Not only is she an adventurous traveler who’s climbed Kilimanjaro and hiked Machu Picchu all within the last couple of years, but she’s also a talented cook.
As you can imagine, those two things sometimes go really well together, and it’s times like this when it’s very good to be her friend.
When I saw her after her recent trip to Peru, the second thing she told me about was this AMAZING meal she had at Greens Organics in Cusco. (The first thing she told me about? The goofy Aussie boys who were also on her Machu Picchu tour and liked mooning fellow travelers. And I’m not going to share that photo here. Because, you know, I’m a professional.) 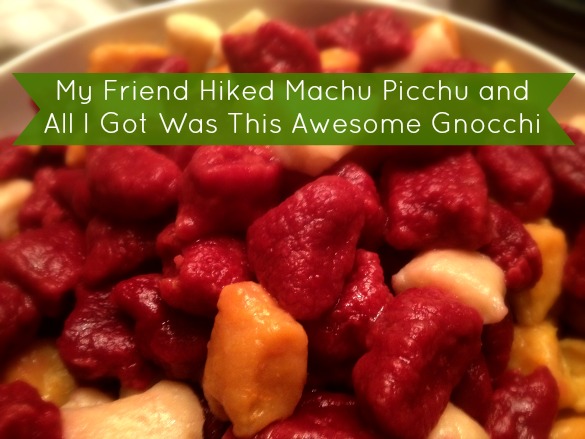 She decided right away that she wanted to try recreating it for a few friends … which turned into a houseful of people, but happily, it all turned out. Happily, I was one of the houseful of people, but, of course, that wasn’t until dinner time.
I started the day with a PB&B&B smoothie (peanut butter and banana and blueberry, along with the usual suspects — almond milk, chia seeds, frozen kale) and a trip to the farmers’ market with my husband to stock up on fresh eggs and greens. The entire market was out of kale (NOOOOOO!), but I picked up some other random greens as well as a mustard made with some beer from our local brewery, Swamp Head. 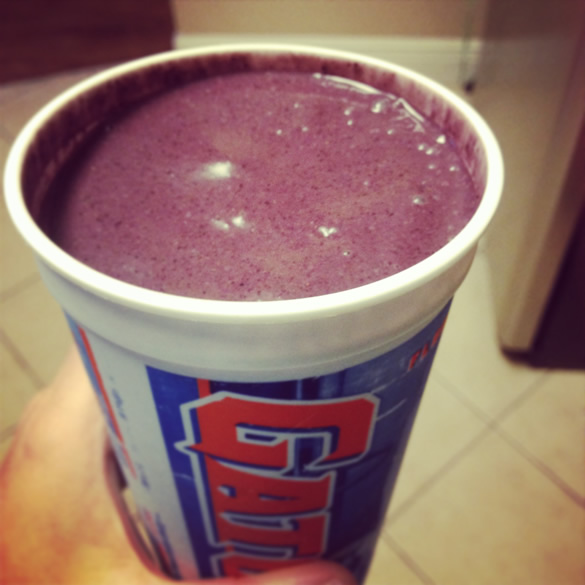 Breakfast of champions! Or errands-runners, anyway.

We took advantage of the pathway that loops around the market and took a nice, brisk two-mile walk. It was nice to get in a workout that elevated my heart rate a bit but didn’t leave me spent in the least.
We ran a few more errands, and before we knew it, it was long past lunchtime, so we hurried home and I treated myself to one of my favorite meals: Toast with avocado, muenster cheese and a fried egg. I’ve been really into the Alvarado St. Bakery Sprouted Wheat Multi-Grain Bread lately — I tried it one day when my local grocery store was out of Ezekiel and this was right in the same part of the frozen section, and found I really preferred both the taste and the texture of the Alvarado St. Bakery kind.

So delicious, so filling, so much goodness.

Now, normally I snack a bit throughout the day, but because we’d spent so long running errands, I flat out didn’t have time. I did a bit of laundry (my god, can you even stand the thrills? Grocery shopping and laundry on the same day? It’s nearly too much.), then got in a solid 45 minutes of flow yoga. I’d had a bit of work-related stress building up and didn’t want to go to Sarah’s party with that weighing on me, so I relied on my sweaty yoga session to flush it all out. I finished up doing some headstands and some husband-assisted elbow stands, which made me feel a little more like a bad ass, which in turn helped to improve my mood.
I sliced up some veggies (after reading Jenn’s post, I asked for and received a spiralizer for my birthday last month and it’s the greatest thing EVARRRRR), grabbed some hummus, and we headed over to Sarah’s, where we were not the only one’s who’d brought an appetizer. 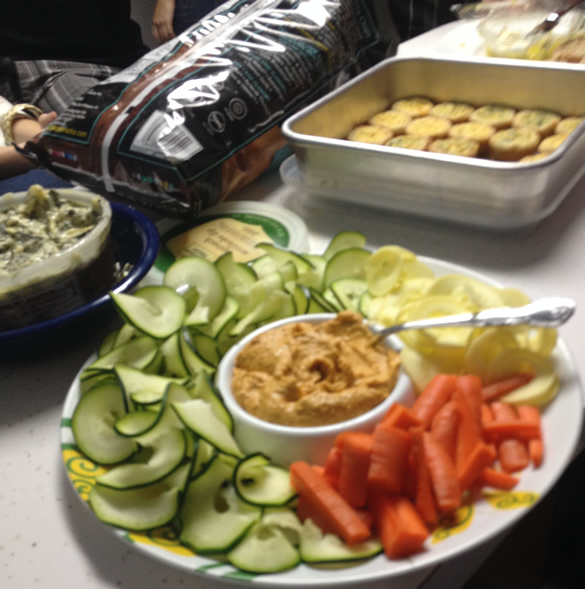 This was only the start of the spread. It just grew and grew.

So, what was the big exciting meal, you ask? She’d been served a sweet potato and beet root gnocchi in a pesto cream sauce. She recreated that, plus added some standard (but still homemade) potato gnocchi, and served it with some pesto with heavy cream sauce and butter made by our friend Stephanie. 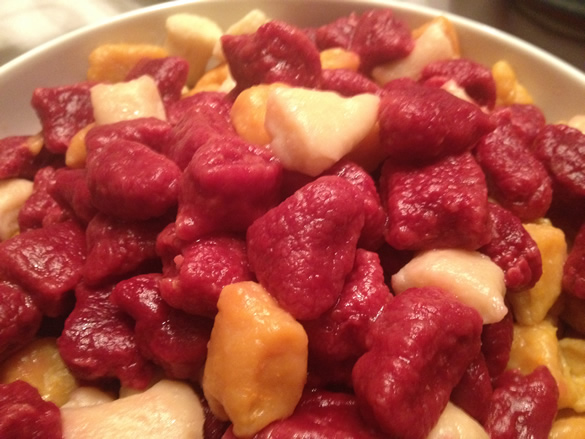 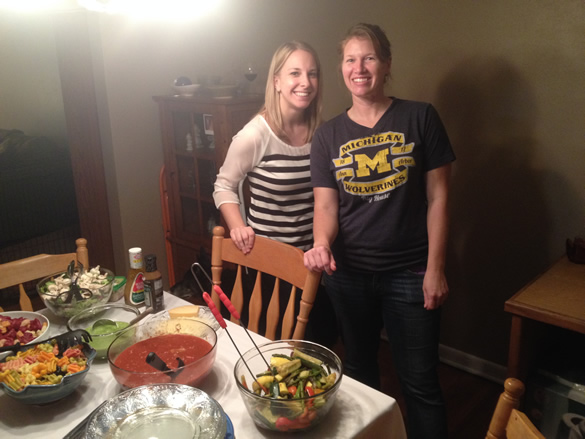 The proud (and rightfully so!) chefs with their spread.

When I asked her how she thought hers compared, she replied, “I’d say I got pretty close to competing with theirs!” Obviously, I have no idea what the actual Peruvian dish tasted like, but I can attest that this version was damn good. There was also salad, good crusty bread, sauteed veggies, and, after we were done with all that, dessert, made by our friend Caroline. Jared and I split one, then split another half, and then had to leave so we didn’t keep snacking (and also because we’d already lost at both Cards Against Humanity and Trivial Pursuit and Team Seymour can only sustain so many losses in one night. And also it was late, and I turn into a pumpkin past midnight. You see? The thrills! They never end!). 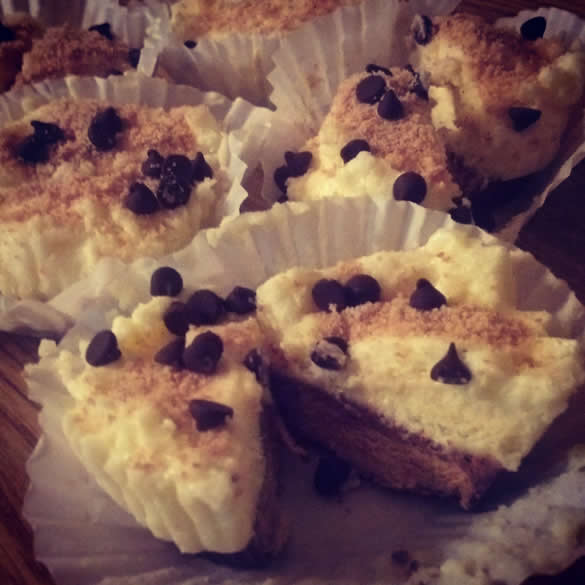 Cheesecake on top of peanut butter cups. No, you can’t improve on it. Don’t even try.

It was a pretty perfect end to a busy but productive day.
Have you ever tried recreating a dish you first tried in another country? How did you fare? —Kristen
New Fitness
New Mamas
New Eats
New Zen
STAY IN THE KNOW
When new stuff happens, you'll be the first to know!