When I tell people that I practice intuitive eating where no food is off limits and I eat mindfully and according to my hunger, they’re usually pretty interested. And often times they wonder what a whole day of intuitive eating actually looks like. So for this What I Ate for a Day, I thought, hey, why not show y’all? Because on this day, I certainly ate … and ate … (and drank!) according to my hunger. 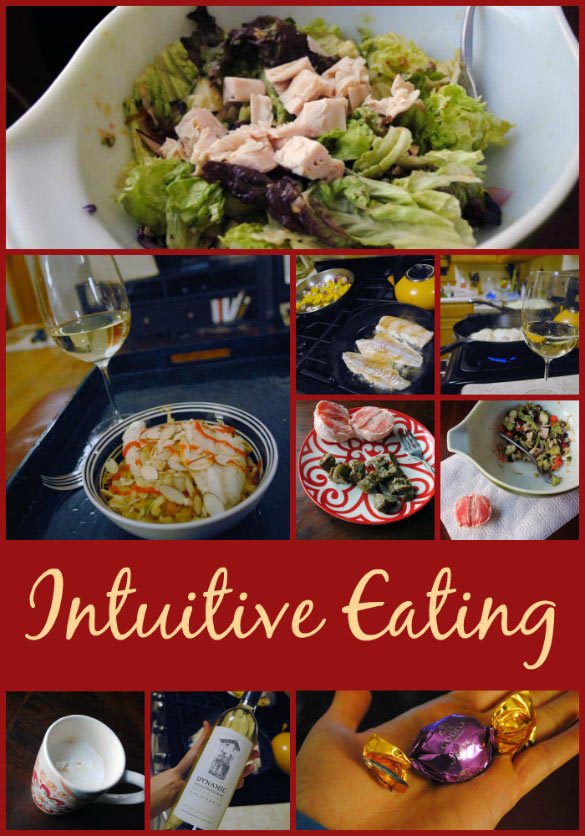 First up: breakfast. This was an off day for me from the gym, and I slept in a bit later than usual. I wasn’t super hungry so a nitrate-free pesto chicken sausage (from Trader Joe’s, of course) plus a grapefruit did the trick. I only ate half of the grapefruit — you’ll see what I did with it a bit later in the day. Then it was work time! 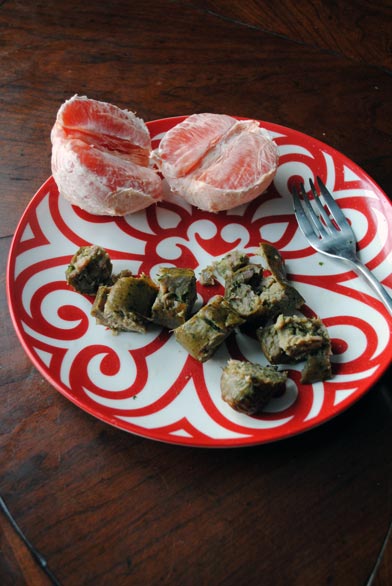 Around 11 a.m. I hit up ALDI for this post. I was getting a little hungry and I was craving some chocolate before I left the house, so I opened up one of these ThinkThin bars. This was my first time trying the Chocolate Espresso flavor and although I didn’t think it had that strong of a coffee flavor, it hit the spot! 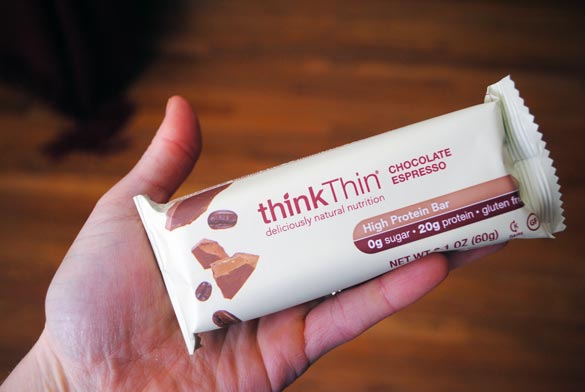 After shopping at ALDI, I *may* have gone in and played at Ulta and oh-ed and ah-ed at the new Gwen Stefani OPI line. I’m normally not a super girlie-girl, but I couldn’t resist picking up the sampler pack. (It is Gwen, after all.) 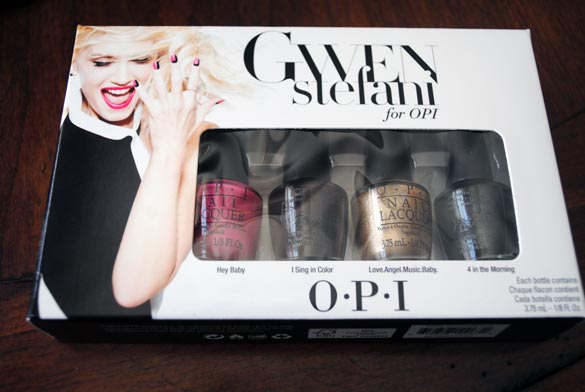 After my shopping fun, it was lunch time! I got a basic Big Ass Salad together in record time — lettuce, turkey, beets, chopped veggies and avocado. 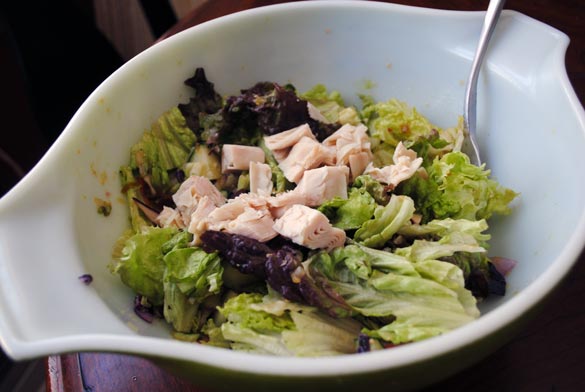 I topped it with this as dressing (my new salad kick of late). It’s SO good. 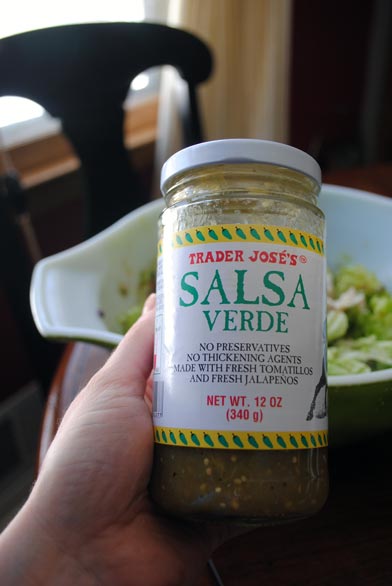 I ate a little more than half of it before getting full. So I threw it back in the fridge and worked for a few hours. Around 4 p.m. I craved something a little sweet, so I brewed a cup of decaf in my Keurig and topped it with my other new healthy obsession of late: coconut-rum whipped cream. I’ve been making it from scratch and will soon share the recipe. It’s life-changing and is so good with coffee. 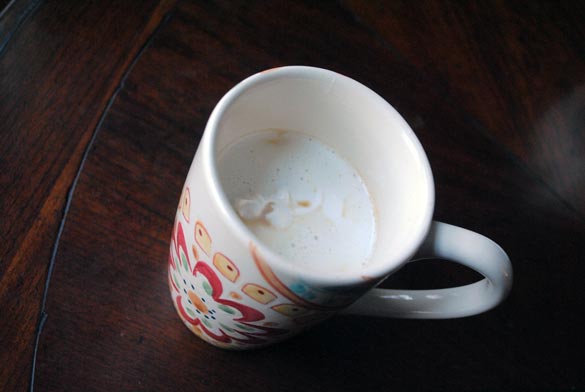 Ryan’s been working a lot of overtime lately, so we’ve been eating dinner together a little later than normal. Which means that around 5:30 I get hungry. Which is where my leftovers come in! Leftover BAS and grapefruit for the belly-filling-win! 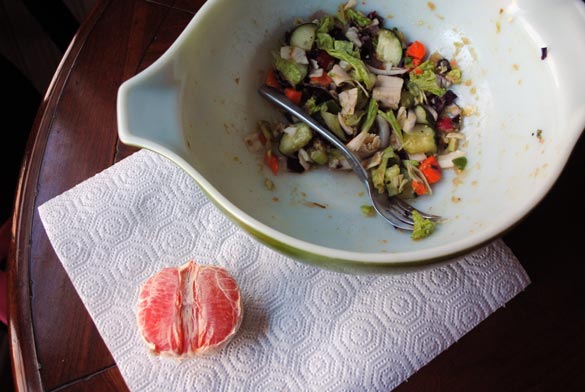 It was just enough to fill me up so that I didn’t start making dinner and eat all the ingredients in the process. (Anyone else do that when they cook hungry?) I poured myself a glass of white wine. This bottle was less than $10 and was nice and fresh and crisp. 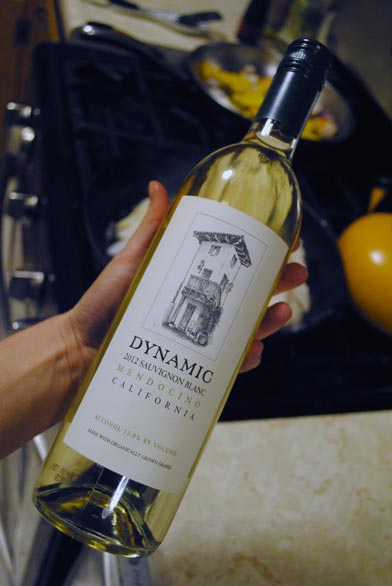 Cooking is always better with a glass of wine, and on this night I was continuing to perfect my peanut “noodles”/pad thai dish that I’ve been working on for weeks now that uses shredded cabbage as a replacement for noodles. It’s really good, but the sauce needs just a little something else that I haven’t quite figured out yet. (As soon as I nail it, I’ll share it — promise!) 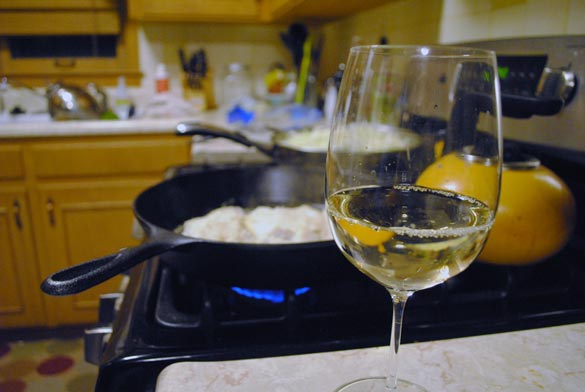 This time I had my peanut “noodles” with sauteed cod, slivered almonds and — of course — sriracha. And a little more wine. 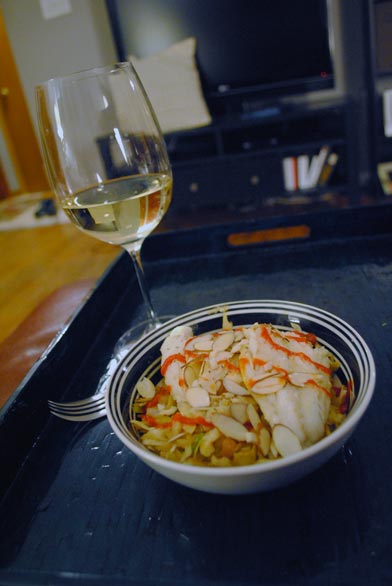 And another small helping once that bowl was finished … 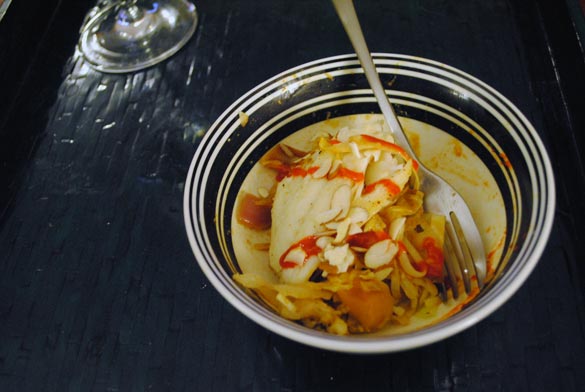 Dinner was finally finished with a dark chocolate truffle and an early bed time. I had a date with the gym the next morning at 5:30 a.m. And I was darn well fueled for it — with no deprivation whatsoever! I heart intuitive eating. 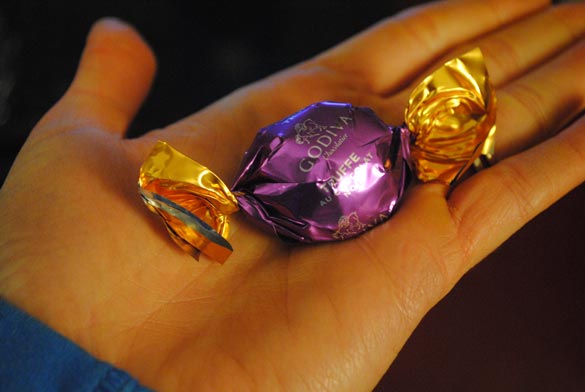 What does intuitive eating look like for you? —Jenn