Remember Sean Vigue’s Pilates post last year? Well, he’s back and bringing us a new awesome post on men and yoga for Fit Bottomed Dudes’ Week! Sean is a yoga, Pilates and Spinning instructor living in central Florida and is the owner of Sean Vigue Fitness, in addition to having his own line of workout DVDs, downloads, an online training program, webcam classes and a popular YouTube channel. 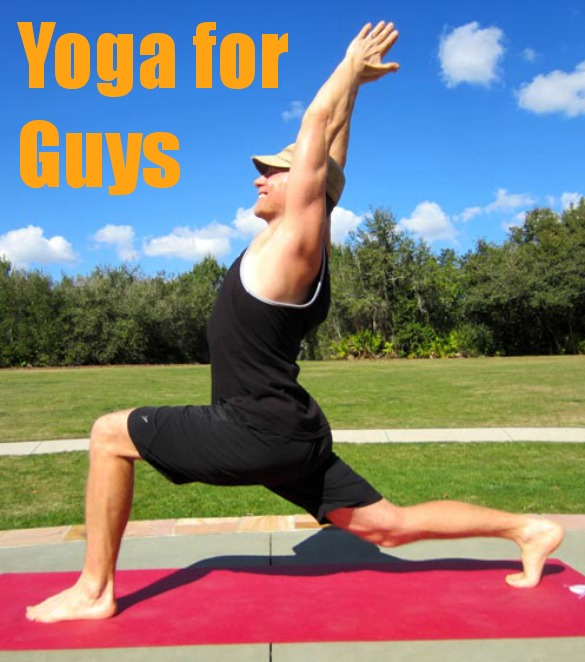 I’ve spent the past seven years working hard to encourage more guys to take my yoga classes and/or do my online workouts.

Why? Because men need the powerful benefits of yoga even more than women. That’s because research shows that men are naturally tighter than women. Plus, there are a slew of benefits yoga has to offer men. Don’t just take my word for it. Several studies have shown that yoga can lower back pain and improve back function; lower heart rate and blood pressure; help relieve anxiety, depression and insomnia; and improve overall fitness, strength, range of motion and flexibility.

However, despite the many benefits that yoga has to offer men, many are still reluctant to give it a try. Today, yoga remains a female-dominated discipline. (In the Western world at least. In India — the birthplace of yoga — it’s men who have mainly been its teachers and students.) In fact, a 2012 survey by the Yoga Journal found that of the 20.4 million people who practice yoga in the United States, only 18 percent of them are men.

So why are men so hesitant to take to the yoga mat in the United States?

In my experience as a yoga instructor for 10 years, I’ve picked up on a variety of reasons.

For one thing, many men may believe that yoga won’t provide enough of a workout. But this couldn’t be further from the truth. Yoga is not just about bending like an elastic pretzel and strange chanting, it’s a full-body workout that builds a strong, balanced, flexible and fit body.

There’s a reason the Super Bowl champs, the Seattle Seahawks and many other professional sports teams practice yoga regularly: it enhances your performance no matter your fitness goal. Need more speed? Focus? Strength? Yoga will deliver all these and more.

I began practicing yoga during my 10-plus years as a professional singer/actor and was astounded at how strong it made me feel in such a short amount of time. When you’re performing in eight to 10 shows per week, it’s extra important to keep your body revving at 100 percent and resistant to injury. It became part of my daily routine. I loved it so much I began teaching classes to my fellow performers with fantastic results.

Another reason it’s hard to get men into the yoga studio is that they have a misconception that it’s a feminine workout. While this couldn’t be further from the truth, the fact is that when yoga made its way to the United States during the late 1800s, for a variety of reasons involving happenstance and misguided marketing, the mainstream perception became: yoga is for women.

Thankfully, that misconception is changing! I’m thrilled to be part of a concerted effort to get men on the mat. Along with yoga instructors, the media is also working to convince guys to give yoga a try. For instance, this recent article in Men’s Health provides a “first timers guide to yoga.” Even women’s yoga-centric brand Lululemon is getting on board. The company recently announced that it would be opening its first dedicated men’s store in 2016. (Whether guys will really shell out $100 for yoga pants remains to be seen.)

As an instructor, to combat the misconception that “yoga is not for men,” and make it  more accessible to my male students, I tell them to “listen to your body” and “modify as needed” to keep the workout honest. They are always surprised by how challenging and instantly rewarding these workouts are. If it’s too intense, I’ll give options to make sure guys are going at their own pace. Yoga always meets you on the mat right where you need it to be.

If you’re a guy who’s thinking about giving yoga a try, here’s a bit of advice: find a class that works for you. If you’re an absolute beginner, find a basic class or search online for a gentle, relaxing routine (try some of mine!). If you feel you can handle a flow or power yoga class, then seek one out and give it a go. Yoga can be adapted to work for anyone regardless of their skill level. All you need is a mat, comfortable clothing and a desire to enhance your life on every level.

I’ve also included five yoga poses for first-time male students. If you’d like more poses,  check out my YouTube channel and try my many yoga videos for all fitness levels.