I’ve been known to spend a little time on the bike, so when I saw that Jenn had tried out a Spin class with a twist in her hometown of Kansas City, I let her know right away that, should I come to visit, we were going to have to check it out. And that’s exactly what we did as a big, sweaty group at the beginning of our Fit Bottomed Girls retreat last week.

Even though I’d read about it, I have to admit I wasn’t totally sure what to expect at Fusion Fly. What I did know, though, was that we were going to work hard, not just because we’re FBGs and that’s how we roll, but also because the class we attended was benefiting an organization called REbeL, which is a peer education program that’s all about empowering young people to embrace their unique attributes and feel confident about themselves. And, you know, we’re kiiiind of all about that. (Also, take a look at our cute matching shirts courtesy of Brooks Running — we like to run, and cycle, happy!) 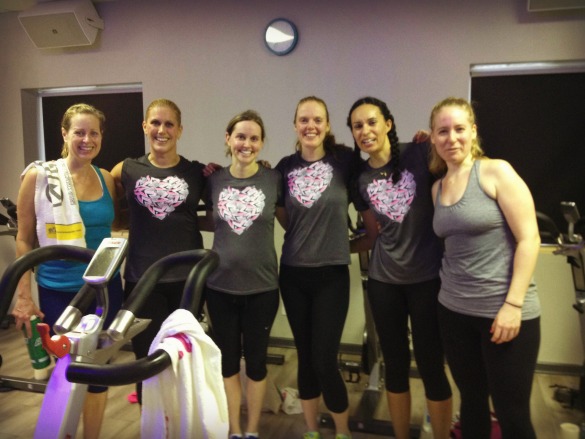 L to R: Karen, Kristen, Erin, Jenn, Tish and Jennifer. We got super sweaty at Fusion Fly and LOVED it.

The Fusion Fly gals were great about helping each of us get our bikes set up just right, and once we had our mats, weights and gliders, we were good to go and started Spinning. And it wasn’t just the six Fit Bottomed Girls there — I don’t think there was a free bike to be found!

Climbing off the bike proved to be a relief — at first. Just a few minutes in with each non-spin set, though, I was thinking of my bike with a longing I generally equate with things like my pillow or Mexican food.

By the time we finished, we were all sweaty and beat — and as a class, we’d ridden 326 miles for REbeL, which was going to be matched as a donation from Darby, the owner of Fusion Fitness. So, it might’ve been rough going at times, but the feeling of accomplishment was so well worth it.

And it wasn’t only the sense of physical accomplishment — this was a fairly emotional class with an instructor who constantly reminded us that we were there to be better, and that we were the only ones who truly knew what we were capable of. In fact, a good portion of the FBG group found themselves feeling teary-eyed and choked up at one point or another. Even those of us who didn’t quite feel that emotional (oh, my cold, cold heart) still felt deeply inspired. Who knew Spin could be so transformative?

Bottom line is, there were a lot of factors that made this a great class — the set-up, the instructor, the company (love my fellow FBGs!), the mood, the mission, the charitable aspect — but what left me feeling great about it all weekend was the fact that I knew I’d given it everything and still walked out on my own two feet. We all did. And if we can do that, we can do so much more than we realize.

Have you ever had a surprisingly emotional reaction to a workout? What do you think caused it? —Kristen