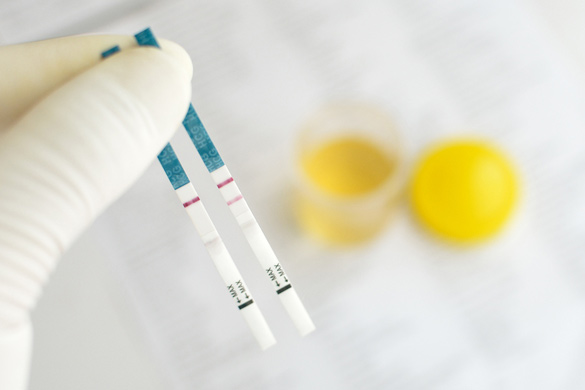 Want to take an expired pregnancy test? Go right ahead. Just know you’ll be taking another one ASAP.

“They” say not to use expired pregnancy tests. I now know why.

When I first suspected I might be pregnant again, I knew I had a few leftover pregnancy tests from previous experience. When I was trying to get pregnant before, I’d bought a bunch of cheap pregnancy tests online — which, by the way, is the way to go if you’re planning to try to get pregnant. You can get them for dirt cheap on Amazon (less than $5 for 20 tests!) and other sites, and they are just as effective if not more sensitive than some of the drugstore brands. So I had a few “cheapies” on hand; the only problem was they were expired by about nine months.

Oh well, I thought. “It’s going to be negative anyway.” So one night I took out one, peed in a cup and dunked it. The control line showed up right away. And so did the positive line. I was a little excited — but it was tempered by the fact that it was expired. I went down to show my husband. I believe my words weren’t, “I’m pregnant!” but “So … this is weird.”

We speculated back and forth for what must have been an hour. Wasn’t it possible that the test could still be right? Wouldn’t it be more likely to just not show up and have a false negative than to have a false positive? One thing I knew from my trying-to-conceive days: You definitely can’t will those things to pop up with a positive line unless you really are pregnant.

I didn’t want to just run out and buy a pregnancy test at that moment — after all, I had two more expired tests and it was late in the evening. So what did my scientist husband want to do? Run an experiment. So he peed in a cup and we tested him for pregnancy. Decidedly negative. So of course I had to take the last one, which also showed up positive. At that point we were pretty convinced that I really might be pregnant.

As you know, the drugstore-bought tests the next morning confirmed it, and trust me, I was kicking myself having to spend more than $15 on three tests. But it was worth it to see those positives — on non-expired tests!

Have you ever used an expired pregnancy test before? Was it accurate? —Erin