I don’t know what’s in the air, but things they are-a-changin’.

I’ve been freaking the heck out. I have this new and crazed aversion to routine. I’ve been doing the same everything for months and months, and I’m going a bit batty. If I had to compare the feeling to anything, I’d say I’m about three more spins in the hamster wheel away from losing my fit bottomed mojo. This happens from time to time.

LA doesn’t have huge shifts in weather, so there’s no clear season to shift me into new workouts. I can do whatever workouts I want all year long. It may seem like I’m bragging, but year long can get boring as heck! There’s no weather shift to force me into something new, so I have to create the shifts myself — and sometimes my internal barometer doesn’t sound the alarm until I’m at the boiling point. I’m currently at the boiling point, so some fast impromptu changes had to be implemented.

That translates into running. It’s been a long time since I’ve run. (My warm-up runs don’t count since they’re 10 minutes or less most days.) I’m not thinking of anything crazy like long-distance work. Just one or two more miles to shake things up. My strength-training workouts won’t escape the great unrest, either. I’ve been doing my husband’s bootcamps at the park for a couple of months now. I’ll stop at the end of this month and some new strength-training fun will have to be sought and discovered.

I know parts of this are natural. The other girls as well as countless friends have opened up about fitness ruts in the past. It’s the fitness funks combined with the fact that I work from home (seeing and doing the same things day in and day out) that has my butt twitching. I need gentle shakes of newness from time to time, or I start to lose my ish. 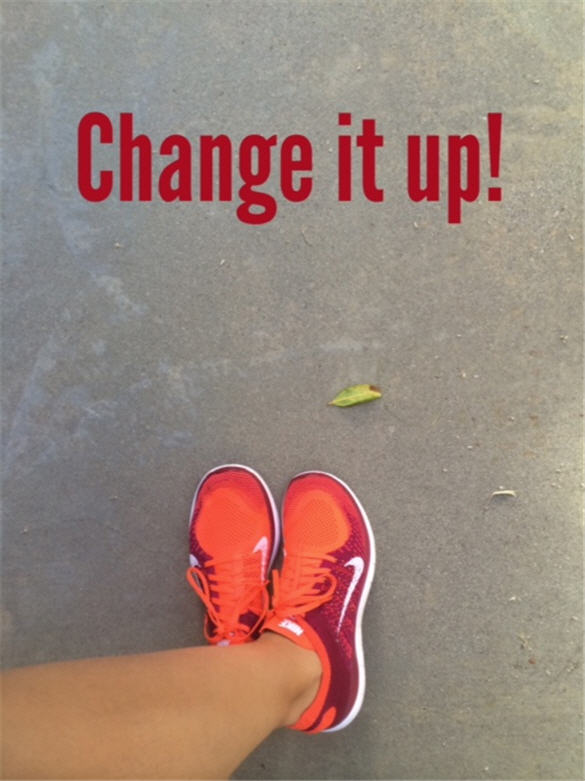 I’ve been wearing Nike’s latest and greatest Free  4.0  Flyknit shoe (which hits stores May 1!) for a couple of weeks now, and it’s helped bunches with my need for new. I’ll be reviewing the shoe soon, but had to share that even something as simple as a shoe change can give you a little much-needed jolt.

It’s all about the tweaks and changes. I crave them dearly. Whoever said consistency and regularity was a good thing obviously never spent a day in my shoes … the old ones, not the new ones. Who can relate? —Tish