My husband and I were going back and forth on a third child for a long time. I knew that IF we wanted a third, I wanted more space between potential kid three than the less than 19 months we’d had between the first two. We both wanted a third kid — but did we want a third kid? Could we handle a third kid? And we decided that, what the heck, we wanted three kids even if we know that the next couple of years would be, shall we say, challenging, with three kids 4 and under.

Cut to: Me falling asleep on the couch while the kids were napping one Saturday. “That was weird,” I thought.

Cut to: Me taking a pregnancy test the next night.

Cut to: It being positive.

The reaction to the third child pregnancy news is different than the reaction to the first. Most people are very excited (like grandparents). Then you get ultrasound technicians who give you a look like you’re the next Michelle Duggar. Or they find out how old your other kids are and look at you like you’re suuuuper crazy. (Which, I admit, I feel super crazy sometimes.) I have a feeling I’ll be getting a lot of “You’ll have your hands full” comments as soon as my belly really pops and I’m in public with my 2- and 3-year-olds. I already have my hands full. I need to sprout another arm this pregnancy to help me cope when the baby comes.

Speaking of bellies, third-pregnancy belly starts showing at, like, conception. My tummy is like “Oooh, I remember this! Let’s just pop out now, at six weeks!” So I certainly feel like I look about two months more pregnant than I actually am. For instance, here I am, 14 weeks pregnant, minus a pound from where I started: 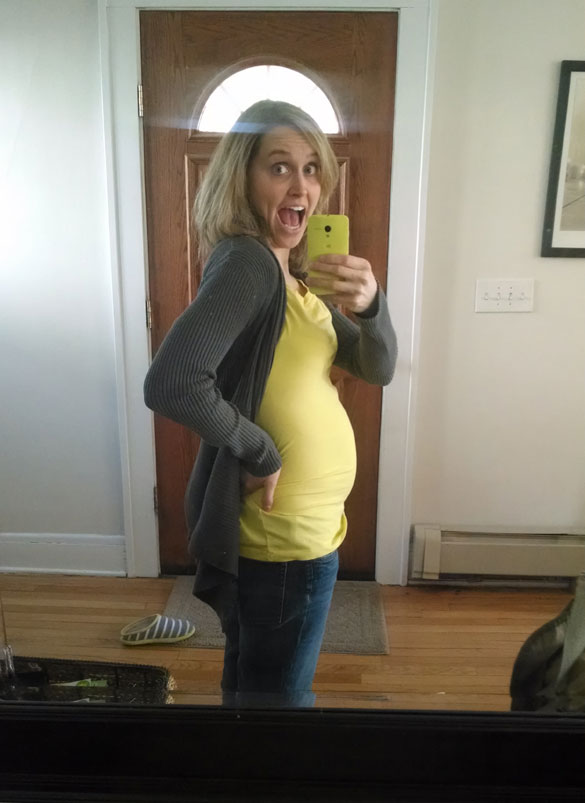 And here I am at 19 weeks with my first. I’ve definitely got more tummy now than I did then: 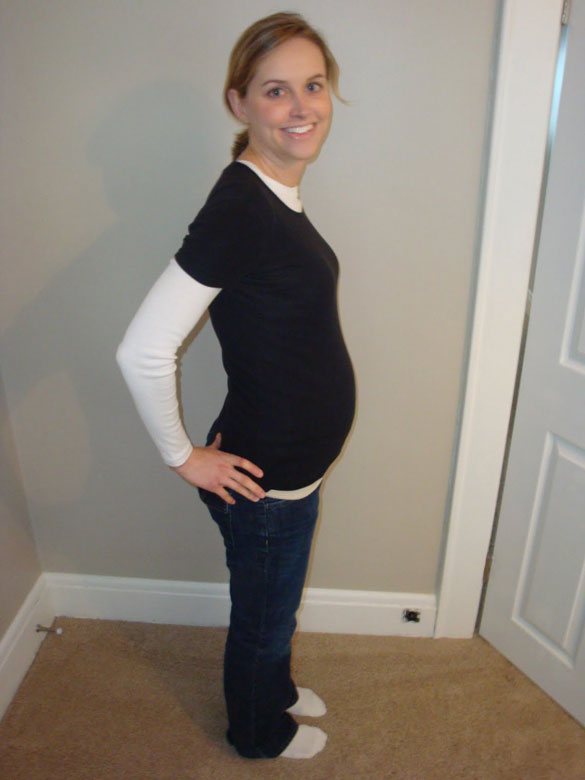 I look so well rested four years ago.

I’ll admit though, it was kind of nice to skip the “mushy mid-section” phase and more or less go straight to looking actually pregnant. Silver lining to not being able to button my pants! And speaking of pants, I haven’t actually transitioned to maternity yet, but when I unearthed some larger jean sizes I’d forgotten about from my post-pregnancy days, I actually said “OOOOH!” out loud because I was so excited to get into a bigger size.

I’ll spare you all of the details of early pregnancy nausea, exhaustion and aversions, and share just a few highlights. The crippling exhaustion had me napping daily when my kiddos slept unless it was a daycare day and I had to work. The nausea wasn’t as bad this go around, but I’m still having some heaving fun now and then. And I’ve gone through a spell where I couldn’t get enough bacon — the real deal bacon — or Claussen pickles. I’ve also been inexplicably drawn to watching Law & Order: Criminal Intent. And workouts? Let’s just say now that my energy levels have picked up again, I’m working on doing more than just getting off the couch!

I’m due late September, but given my history of going more than a month early both times, I’ll certainly try to be prepared by mid-August. But I’m really hoping this one will be the one who decides to make it full term and spare us a NICU visit.

I’ll be sharing pregnancy fun here and there — along with a few products I’m testing out, including a round-up of some prenatal workout DVDs I’m trying. But tell me, fellow mamas who’ve had more than one: Did your belly arrive much more quickly the second and third times, too? —-Erin