I’m a cereal-eating fool. I’m fully aware that most cereals have too much sugar and not enough fiber, fat and protein to really stick to your ribs and keep you full until lunch, but that doesn’t stop me from eating cereal all the time. It’s a fast go-to breakfast and snack for me — I just know that usually I’ll need a handful of nuts or an egg or some yogurt to power me through until lunch, and I’m okay with that. And because my gut is strong like bull and gluten is far from a mortal enemy for me and my stomach, I took one for the team to review Post’s Great Grains Digestive Blends, in Vanilla Graham and Berry Medley flavors. (Because I’m pretty sure they want the “digestive” portion of their product to be a positive thing, not a problem sort of thing like it would be for Jenn!) 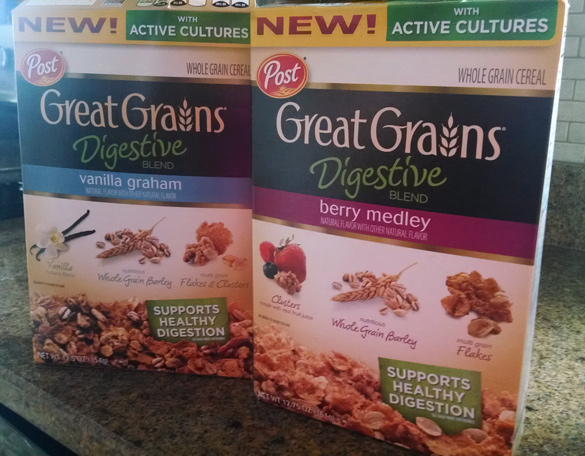 What to look for in the cereal aisle.

Both cereals have similar nutritional stats: 200 to 210 calories, 7 grams of fiber, 6 grams of protein and 8 grams of sugar for a one-cup serving. If you’re looking to increase your whole-grain count, this is an easy way to do it as they have 41 and 43 grams of whole grains per serving. Both cereals have some corn syrup on the ingredients list, but they’re also got some fancy probiotics, too, which you don’t see in a lot of cereals — and hence the “digestive” element of the cereals. (If all the whole-grain fiber doesn’t help you out, surely the probiotics will!) In fact, the probiotics are really the only thing on the ingredients list that sounds like a science experiment. Win for Great Grains! 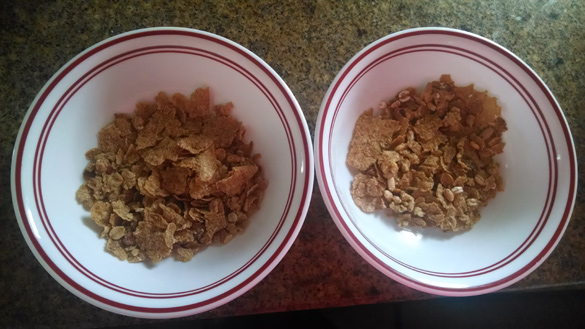 You’ll notice that both cereals are flaky. The berries of the Berry Medley (left) don’t pop right out at you, and the Vanilla Graham (right) has more clusters of goodness and crunch. An extreme close-up of Vanilla Graham: 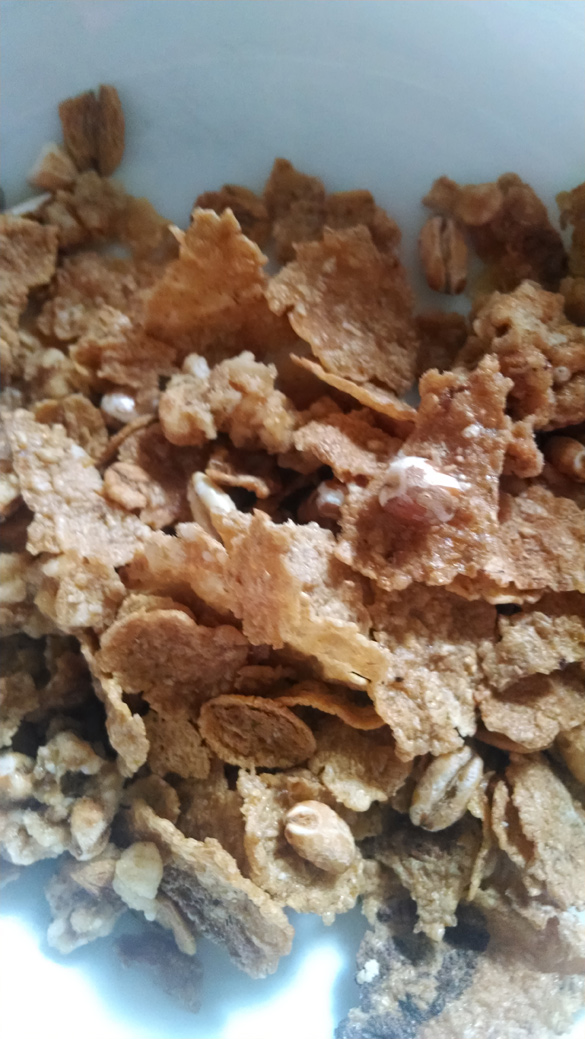 Now for the taste test. The Berry Medley was good, but for the lack of visible berries, it had a strong berry flavor, which was slightly too sweet for me. But the Vanilla Graham hit the nail on the head, both with its milder sweetness and its crunchiness as compared to the berry blend. And the digestive test? Let’s just say that I don’t typically have a problem in that area of my life, but if you do, the amount of fiber and whole grains will be a benefit to your sluggish system!

Are you a cereal eater, too? Are you on the probiotic bandwagon yet? —Erin