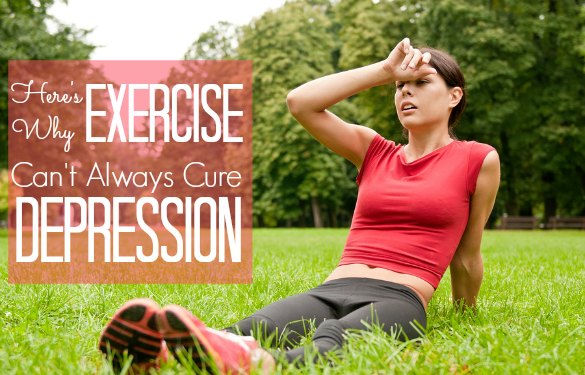 I’m a firm believer in the power of exercise in helping to deal with stress. I know it’s a powerful tool because it works for me — I struggle with Generalized Anxiety Disorder* and have dealt with depression, and my more difficult periods can be precisely tied to times when I’ve slacked off on working out. It’s a bit of a chicken/egg situation, for sure, but each has a direct and palpable influence on the other.

However, a study in the official journal of the Canadian Academy of Sport Medicine that came out last year states that exercise might not be the depression-slaying silver bullet many of us have thought it to be.

The study focused on 50 varsity swimmers (28 men and 22 women) based at two Canadian universities who were competing to represent Canada internationally, and looked at whether the swimmers suffered from depression and, if so, how closely tied their depression was to a bad performance. Turns out, these kids were fairly prone to depression and, within the top 25 percent of the elite swimmers, the prevalence of depression doubled.

The study stated: “The findings suggest that the prevalence of depression among elite athletes is higher than what has been previously reported in the literature. Being ranked among the very elite athletes is related to an increase in susceptibility to depression, particularly in relation to a failed performance. Given these findings, it is important to consider the mental health of athletes and have appropriate support services in place.”

So, what does that mean for me and others who consider themselves athletes, but not exactly elite? Psychologist Kyle Davies tackled this subject with what I think are some pretty smart points.

In a nutshell, he explains that stress is a really huge concept to define narrowly — yes, you can experience it in the typical ways, but your body can also be in a state of stress without you realizing it. So, adjusting your thoughts or just trying to calm down doesn’t necessarily fix the problem, which may be an emotional imbalance or build up of toxic emotions. If you have an emotional imbalance, especially if it’s exacerbated by issues regarding your athletic abilities or performance, exercise is probably not going to fix things.

Bottom line, he says, is that if you’ve got an athletic goal of any sort, awesome! Go for it. But if you’re experiencing depression or anxiety or anything symptoms that seem to be unexplained, don’t just assume that exercise will fix it. Take care of your body and your mind.

Have you dealt with depression or anxiety and noticed exercise’s effect on your symptoms? I’d love to hear your story below, and I’m sure the rest of our readers would, too! —Kristen

*I am not a special snowflake by any means and I am definitely not seeking pity here — lots of people deal with GAD and mine is currently manageable without medication (although this will probably make it clear why I’ve been trying to commit to meditation — and why I find it so, so difficult). Some people have much more severe cases and do require medication or more outside help, and that is normal and okay. I’m only sharing this here because I think it’s important to note the positive effect exercise has on my personal struggle, and while I’m happy to share these findings, I do not want to discourage someone suffering from anxiety or depression from hitting the gym if it’s helpful to them. And if you or someone you know needs help, do not be afraid to reach out. Just want to read more about it without getting all medical? This might be a good place to start.