Since I live not 15 minutes from FBG headquarters and regularly post on Fit Bottomed Eats, I was delighted to be included in their recent brainstorming weekend. However, my glee quickly turned into trepidation when I realized the retreat included a workout at The Fit Pit, a pretty hard-core training facility here in Kansas City. 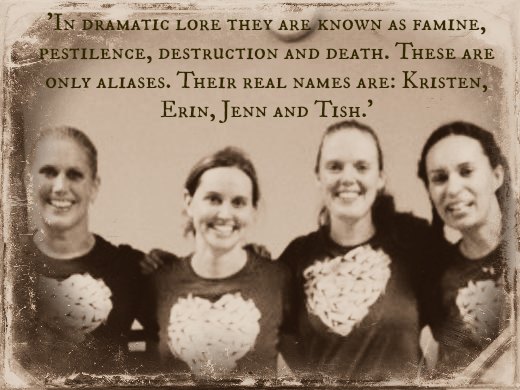 My original thought was “Holy crap, I can’t work out with the original Fit Bottomed Girls; it’ll kill me!” Singularly, their fitness endeavors speak volumes, but together they’d be fearless and unstoppable. In my mind’s eye they held as much mystic as the legendary Four Horsemen of Notre Dame.

Anticipating a call from Jenn, I mentally prepared my defense: bad knees, stiff neck and pinched shoulders, were surely enough to justify exoneration.

It was all a bunch of smoke and mirrors, and Jenn wasn’t buying any of it. She assured me there would be tons of modifications for people of all ages and fitness levels and urged me to come.

Next, I mounted a surefire round of psychological arguments to convince myself. “At this age I don’t need to prove anything; I know what I’m capable of.”

Fortunately, my lawyering skills aren’t that savvy, for in my heart of hearts, I wasn’t buying it either. I was just scared. Fear of failure and embarrassment topped the list, but I knew from past experience that if I didn’t at least try it would forever haunt my psyche.

So I went, and it was fine. Actually, it was more than fine; it was fun! I tried different maneuvers that aren’t accessible at my regular gym and was secretly pleased with the ease in which I breezed through the abdominal routine giving credence to yoga’s ability to create a rock-hard core.

I surprised myself by returning the following Monday to sample an entire week’s worth of workouts. Workouts similar to CrossFit may not be the love of my life, but it is one more thing I no longer fear.

And my worries of working out with Erin, Jenn, Kristen and Tish were totally unfounded. They were all super supportive and not the least bit intimidating. Much like those illustrious Four Horseman, they are just people — but great ones at that.

May their legend live on.

What fears prevent you from trying new things? —Karen