If you haven’t met Tish before, you’re missing out. She writes regularly over on Fit Bottomed Girls, and after getting married recently has been dealing with lots of speculation as to whether she’s pregnant. For the record: She’s not! Today she discusses the annoyance that is everyone saying, “You must be pregnant!” every time she complains of a twitch. 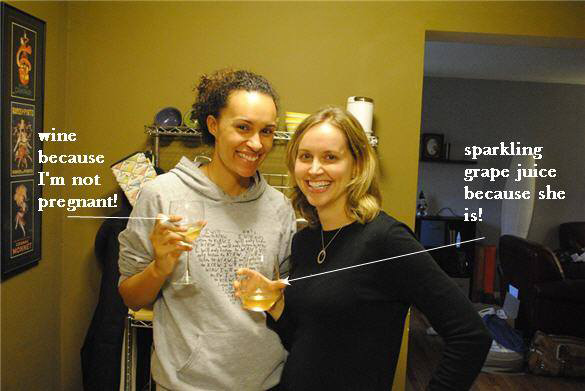 Tish, imbibing on some wine. Because she’s NOT PREGNANT.

Something weird happens the minute you say “I do” and become one half of a married couple. People stop seeing you and start seeing a vessel for future babies. A heightened sensitivity arises and no matter what you say or do, baby theories will abound. Heck, we had people asking us about our future children at the wedding. There was even a speech that included wishes for future babies.

I was actually prepared for the wedding/honeymoon baby talk, but I wasn’t prepared for the talk to keep going and even grow in spirit. Back in February, I contracted a horrific stomach virus (that did not involve throwing up, if you catch my drift) but that tiny fact didn’t stop everyone from assuming I was experiencing morning sickness. It didn’t matter that I wasn’t throwing up and was opening up that I was in fact experiencing mass exodus rounds from the opposite end; I was knocked up and apparently in denial or attempting to be sneaky about being knocked up.

What is that about? Is this the reason why women don’t share when they start trying with people or even that they want children at all? Why is there this crazy push for babies? What if I didn’t want children or couldn’t have children? I wish those were the questions folks would consider before asking me the baby question. I was sick as a dog, but having to muster the energy to ward off the baby assumptions. Talk about butt twitches!

So just for the record, my sore elbow, diarrhea, hiccups, zits and other physical ailments that may arise do not entail embryo activity. Sincerely, your friendly so-not-pregnant fit bottomed friend.

Who else feels me on this?! —Tish