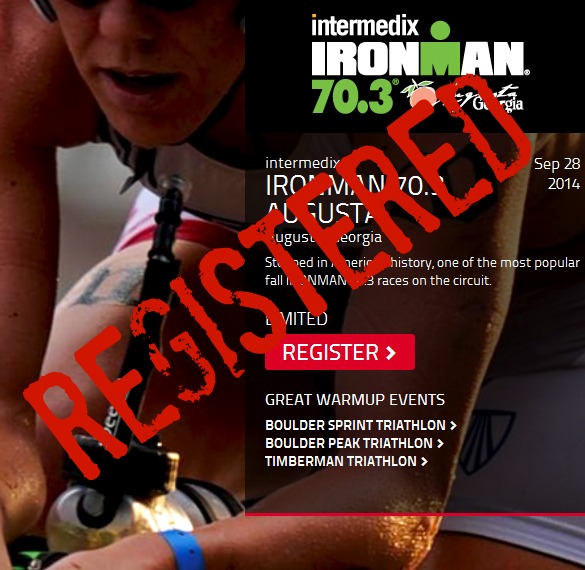 Three years ago, I had the chance to ask Bob Harper for his advice on how I’d know if I was ready to commit to a half-Ironman distance triathlon. He said, if I was thinking about it, I’m ready.

It took a while for me to agree, but let’s go ahead and make it official. I’m ready. I’m registered. I’m participating in the intermedix Ironman 70.3 Augusta on September 28 of this year.

I’d been toying around with this distance, and, in fact, this particular race for a while. After my experience at Leadman last April, followed up by a half marathon that didn’t make me want to kill myself in May, I felt pretty ready, but I held off on registering until it was too late and the race was sold out.

And, I believe it was actually the weekend of that race that I hurt my knee playing sand volleyball, leading me to a diagnosis of osteoarthritis in both knees (nice knowing ya, cartilage, and when did you get here, bone spurs? I wasn’t expecting you for another couple of decades) and then months (and months, and months) of physical and massage therapy, an MRI and an appointment with an orthopedic doctor.

It’s safe to say that, by the end of 2013, a half Iron wasn’t even on my radar. I was just hoping I’d be able to get back to running, period.

Then, shortly after the beginning of the year, the folks at Ironman reached out and offered to cover my registration for the half (or full ZOMG) Ironman race of my choice this year, and just like that, the carrot that I’d been trying to meditate out of existence dangled right back into my field of vision.

I put a couple of solid months into physical therapy with a goal. I wanted to get to a point where I could at least do a run/walk interval (which, as of now, is pretty much my new normal) for a few miles by the time I followed up with my orthopedic doc. If I could get him to sign off on this race, and if he thought I could do it without causing further damage (because let’s face it — I want that carrot, but no way is it worth an early knee replacement or something) — I would go for it.

My follow-up appointment went well. My doctor was impressed with my dedication and my progress, and then asked the big question: “What are you hoping to do next? Got a 5k or something in mind?”

“Well, actually … I was kind of hoping you’d clear me to, umm, do a half Iron? Not until later this fall! And I wouldn’t, like, race it-race it. I would totally run/walk, I swear,” I said with the best puppy dog eyes I could muster, thinking, Damn, I should’ve brought him a coffee or a doughnut or something as a bribe.

He laughed and shook his head in disbelief (or admiration? Nope, definitely disbelief). “Seriously? Out of the gate, this is what you want to go for?”

I nodded. “It’s the one big thing on my fitness bucket list that I haven’t done, and I know that it might become less and less likely that my knees will handle that distance as I get older. It’s my carrot.”

Happily, he got it. He smiled and nodded back. “If you can do the training without creating a lot of irritation, and if you’re smart about the run … okaaay. You’re cleared. But just know that if you push it too hard and that knee gets irritated again, you’re going to end up right back where you were last fall.” Which was, you know, flat on my ass and pretty unhappy about it.

This summer, I’ll be training for the longest race of my life, and I’ll have to train smarter than ever to even make it to the starting line, let alone the finish. But isn’t that what an endurance event like a 70.3 or a full Ironman is all about? Testing your body — and your mind — to see what you’re made of? I’m not dealing with anything nearly as serious as many people who’ve earned an Ironman medal, so although I’d be lying if I said I wasn’t a little scared, I’m also so, so excited. I won’t be the speediest racer out on that course this fall, but I will be among the proudest.

If you’d told my 16-year-old self that this is what I’d be doing at age 34, I would’ve laughed myself straight into an asthma attack. Now, I can’t imagine not having a 70.3 on my horizon.

Who out there has done a half or full Iron race and lived to tell the tale? I would love to hear your inspiring stories, tips, advice, etc. here! —Kristen