Normally, when I go out to eat, budget is a consideration. I mean, I’m not often one to get something just because it’s the least expensive thing on the menu, but it’s not like I walk in and tell the waiter, “I’ll have your finest food, stuffed with your second finest food.” (And that’s not only because The Simpsons taught us that this leads to lobster stuffed with tacos.)
However, Jared and I had set aside a pretty decent food budget for our trip to Hawaii, and had a few places in mind where we planned to ignore the dollar signs (well, to a certain extent, anyway) and just order what we wanted. One of those was The Beach House (yes, I’m still itching to go back), and another was Nobu Lanai at Four Seasons Manele Bay.
Living in Florida, we get some good sushi and seafood, but it’s much different than what’s available in Hawaii, so we figured we’d go with a few chef selections. What we didn’t realize was that the waitstaff was expertly trained, not just in helping you choose the best dishes, but also bringing them in an order that made the meal an actual adventure for the taste buds. We went from savory to spicy to sweet and back again, sampling hot and cold delights while overlooking the sunset. 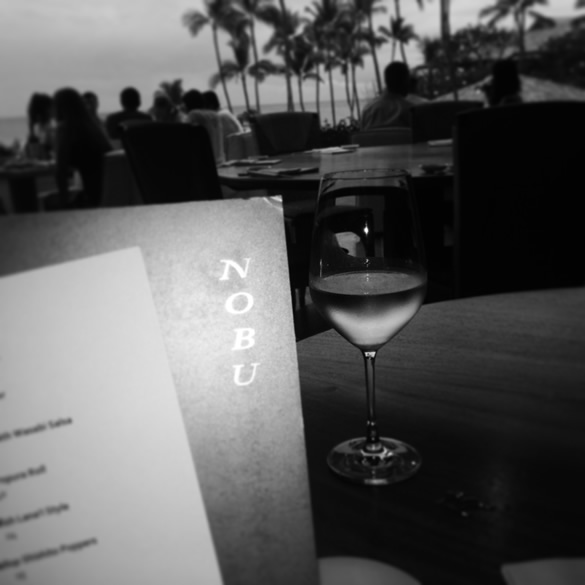 I’m so sorry. This is seriously the only even slightly salvageable photo from the night. Next time, I’ll bring the big girl camera. A meal like this deserves it!

Now, this is the part where I have to apologize for the lack of amazing food photos. I actually did take a bunch with my phone, but the combination of romantically dim lighting and, you know, raw fish, plus a phone camera? It ain’t pretty. But, I’ll tell you a bit about each course and let you use your imagination!
We ended up ordering five small plates to experience a proper taste, and I wouldn’t have wanted to do it any other way.
Rock Shrimp Tempura with Creamy Spicy Sauce: You know those dishes that you find lots of places, but always order because A) it’s never not good, and B) it gives you a feel for the quality of the restaurant? This is one of those dishes, and the moment the first delicately fried shrimp in spicy sauce crossed my lips, I knew we were in for quite an evening. It wasn’t the most special dish of the night, but the sauce itself was so good that I even nibbled on the garnish that ended up covered in it.
Bigeye Ahi Sashimi with Wasabi Salsa: Anyone who swears they don’t like sashimi has never tasted ahi like this. We ended up receiving the much-coveted belly cut, and it was as smooth and rich as butter. And while I love a good, strong wasabi flavor, the wasabi salsa was perfectly mild — any more heat and it would have taken away from the fish itself.
Spicy Tuna With Crispy Rice: This was the dish Jared had been looking forward to after hearing about it on a recent trip to Los Angeles, and our waiter assured us we wouldn’t be disappointed. The dish itself requires some instruction, which was actually kind of fun — you take a square of fried, crispy rice on a stick, dip it in soy sauce, then top it with the spicy tuna. It was a bit like a deconstructed spicy tuna roll, but with some crispiness and an added kick. I really want to figure out how to make those rice squares — I feel like there are endless appetizer possibilities there.
Black Cod Saikyo Miso: Black cod on its own is a really tasty, buttery fish, but when prepared Nobu-style? Oh. My. GOD. I’ve never tasted anything quite like it*. Our waiter said people sometimes called it “candy fish,” both because it was so sweet and so addictive, and I couldn’t agree more. It flaked apart easily with the slightest touch of a chopstick, and each tiny bite I took (and I took tiny ones to make it last longer) was positively bursting with flavor. So much so that just writing about it now just inspired me to order the Nobu cookbook. (I’m sure you’ll be hearing more from me on that in the coming months!)
And yes, we did have a fifth dish (lobster tacos, I think), but I only took one bite and was both so full and so, so thrilled with the Black Cod that I threw in the towel and focused on savoring the last few sips of my Nobu Matsuhisa Chardonnay. (Hey, if the chef the place is named after has his own wine, that’s what I’m gonna drink, right?).
We probably spent the equivalent of what we’d typically shell out for three or four meals on this one alone, but it was absolutely worth every last penny. We just won’t be planning a dining extravaganza quite like that for … well, a while, anyway. Must be the Fit Bottomed way!
*After returning home, I went to dinner at a nice sushi restaurant here and discovered they served a Miso Black Cod. It … well, it  was totally tasty, really, but not quite in the same ball park. Had to try it, though!
Do you have an absolute limit when it comes to a really special meal? Have you ever been to any of the Nobu locations? —Kristen
New Fitness
New Mamas
New Eats
New Zen
STAY IN THE KNOW
When new stuff happens, you'll be the first to know!
Just for You
Drop the diet for good
A variety of anti-diet coaching programs just for you.
Get free access
STAY IN THE KNOW
When new stuff happens, you'll be the first to know!
About Us
Jenn and Kristen are passionate about letting women know they're more than a number on the scale.
Get the deets
Instagram
X