Over the last couple of summers, several bloggers I adore have extolled the virtues of grilling pizza. And while it’s always looked and sounded fantastic, I couldn’t quite get on board. I have a fantastic pizza place just around the corner, and while I love grilled goodies, I’m not super comfortable using it myself. It’s not that I think it’s a man’s job or anything like that, but my husband, Jared, really enjoys doing it, and he does a good job — why should I interfere?
Plus, there’s the dough, which is a lot like baking, and we all know how great I am with the baking.
But, the idea had apparently taken root, and in recent weeks, I’ve found myself dreaming up recipes for pizzas that cater to exactly my tastes, like a hybrid white and margherita pizza with roasted tomatoes, caramelized onions and basil. I had to have it, and I wanted it grilled. Like, now.
Last weekend, Jared and I invited our friend Kevin over to grill some pizzas. Now, Kevin once worked in a pizza joint in New York, so he knows a thing or two about pizza, and this ended up being tremendously helpful. Because, sure, I had a great recipe in mind and I knew Jared would be able to man the grill, but we really had no idea how to handle the dough. 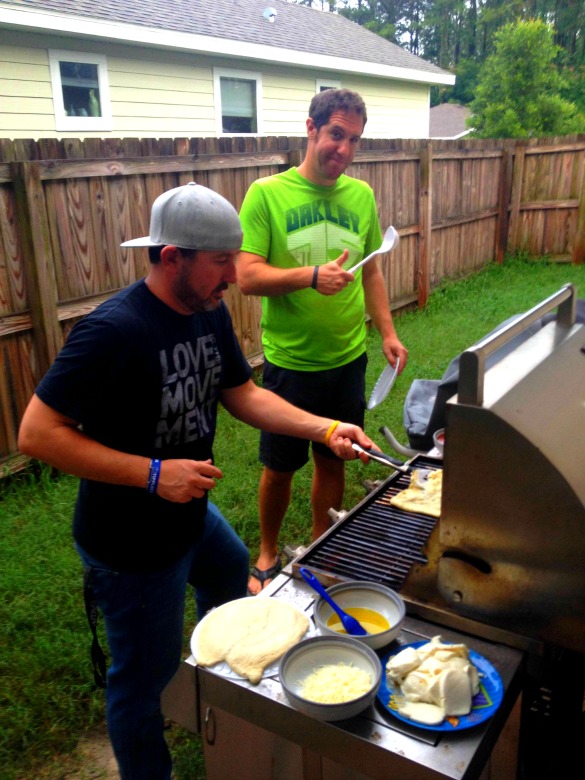 They only burned themselves a little, and I say this was well worth it.

We had two bags of pre-made dough from the store — Trader Joe’s dough was a little easier to work with than what we got from Publix, for those who want to know. We split that up into four small-ish, fairly thin crust pizzas (about the size of a dinner plate) and made two pepperoni pizzas, two of my special recipe, a pepperoni calzone and a veggie calzone.
One note before you begin: Have all your toppings and everything ready and on-hand. Once you get started, things will move really quickly, kind of like an assembly line, and you won’t want to be scrambling between the kitchen and the grill. 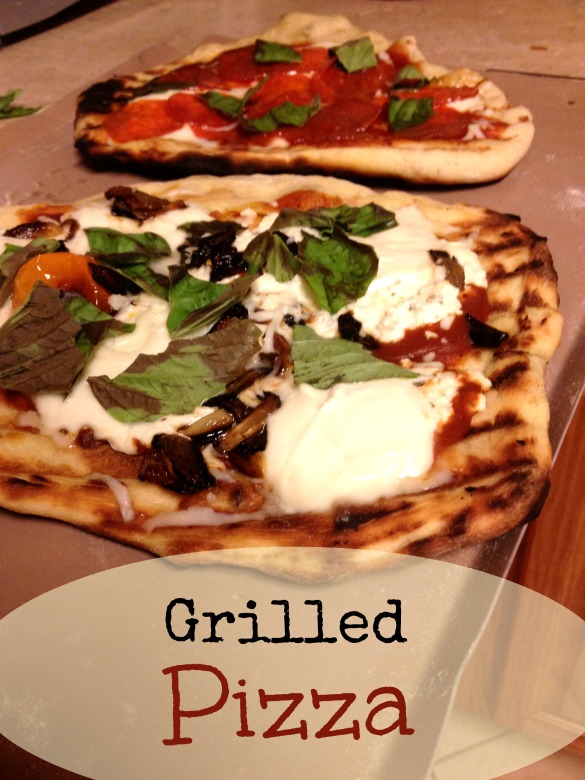 Ingredients
Olive oil
Pizza dough
Pizza sauce (we liked Trader Joe’s in the can — very New York style)
Log of mozzarella cheese, sliced
For White/Margherita Pizza and Calzones:
Ricotta cheese
Garlic (minced or crushed)
Dried herbs: Basil, oregano, parsley (to taste)
Onion (doesn’t really matter what kind)
Bulb of fresh garlic
Red pepper flakes
Small tomatoes (plum, cherry, etc.)
Fresh basil leaves
Long handled spatula (not plastic) for flipping and retrieving dough and pizza from grill
Directions (Pizza)
1. Mix ricotta with minced or crushed garlic and dried herbs to taste. Set aside.
2. Caramelize onions by sauteing in olive oil until very brown or even black. Halfway through, add in sliced cloves of fresh garlic and sprinkle some red pepper flakes in there. Near the end, add your tomatoes — you want them to get fairly soft, but not bursting.
3. Now would be a good time to get your grill good and hot — around 600 degrees with the lid down is right on.
4. Roll out dough to be fairly thin. We put prepared dough onto paper plates, but should have used flour or something to make it easier to get them off. Still, it wasn’t a bad system. 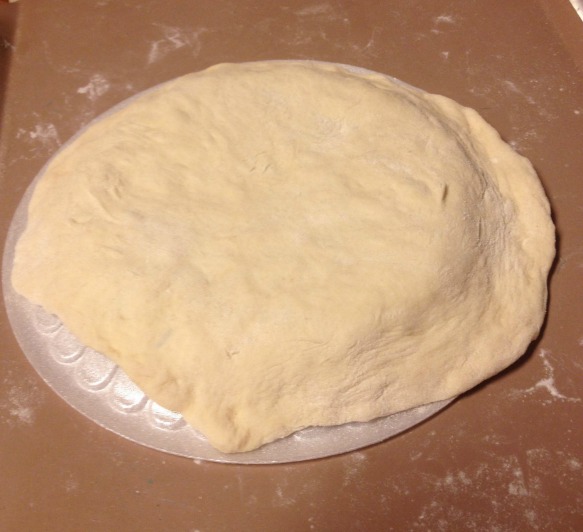 It might not look impressive, but rolling dough into something resembling a thin circle is no joke!

5. Take everything — dough, sauce, toppings — out to the grill. Brush dough with olive oil on one side and put that side down on the grill for a minute or two. You want grill marks and a little charring, maybe, but it shouldn’t get too crispy yet.
6. Brush the top of the dough with olive oil, flip it, and start adding toppings. For the white/margherita pizza, add a very thin layer of pizza sauce, top with your ricotta cheese mixture, then add mozzarella (not overlapping, but slices shouldn’t be too spread out unless you’re really trying to save calories) and your caramelized onion goodies (including the garlic and tomatoes). Don’t load it too heavy or you’ll have trouble getting it off the grill.
7. Put the lid down for 3 to 4 minutes and check. If your edges are crisp and the cheese is melty, get that puppy off the grill, add your fresh basil and get ready to chow down on the best pizza you’ve ever had!
For calzones: Use the same amount of dough, but prior to going out to the grill, drop a dollop of ricotta cheese mixture into the middle and add your other toppings (pepperoni, green peppers, onion, mozzarella, etc.). We didn’t perfect these on the grill — Kevin got them started out there, and then we put them in the oven at 500 to bake for a while longer, taking them out just a bit early so that, when we heated them up the next day, they’d be perfect (and they were!).
Have you ever grilled pizza? Got any tricks to share? —Kristen