My training for the Ironman Augusta 70.3 in September is really ramping up, which means that even my lighter training days are a little more intense than an average day when I’m not training. And last Friday was a perfect example — I got up and immediately went for a 45-minute run, worked a long day, grabbed a much-needed nap, followed by a trip to the gym to spend some quality time on the Spin bike before a late dinner.
So, as you might guess, my eats were packed with nutrition if not a lot of excitement.
I started off with a banana and peanut butter, which, well, I didn’t take a picture of because I was rushing to get out the door before the sun made things too terribly hot, and also, I mean, it’s a banana and peanut butter. You know what that looks like, right? (Not like this, although you’re welcome for that earwig.)
After my run, I had an ice cold smoothie made with Greek yogurt, pineapple, OJ, chia seeds, protein powder and kale. I tossed some extra ice cubes in to keep it extra chilly and to make a little more — I was parched from the run and wanted to sip on my breakfast for a while. (Don’t worry, I also drank lots and lots of water.) 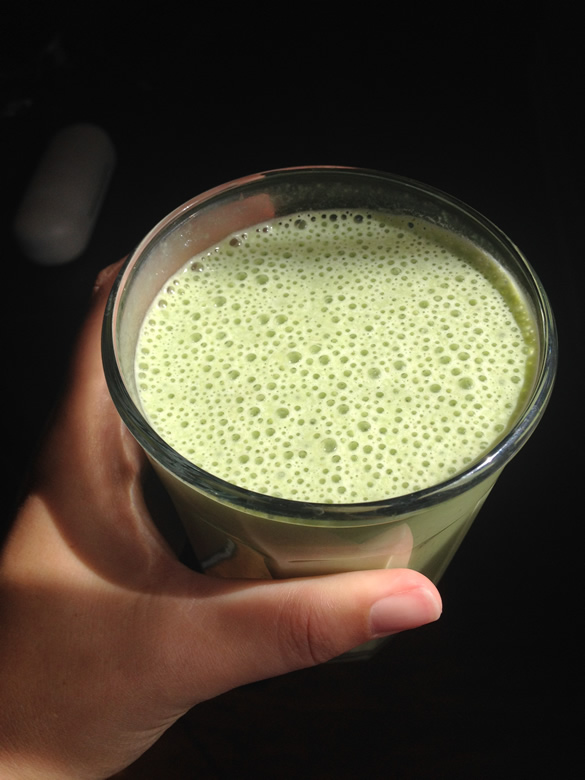 Mid-morning I found myself craving something a little sweet, so I poured a small glass of chocolate milk and, man, did it ever hit the spot. I just love that stuff. 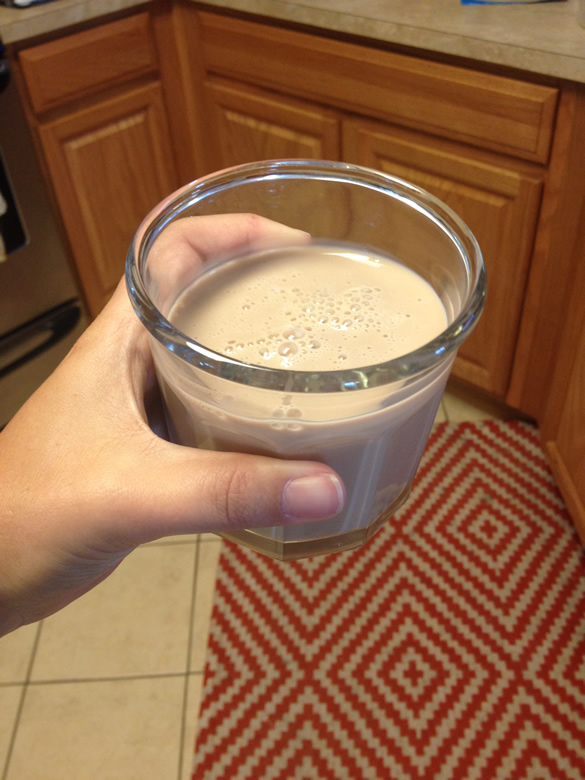 My day got busy and suddenly, it was 1:45 and my stomach was making all kinds of noise, so I was really, really happy to have leftovers in the fridge from the night before at one of my favorite restaurants, The Jones B-Side. I’d ordered the Inca Bowl, which is quinoa, black beans, tempeh, sweet potato, egg, chevre and avocado, so I added a little more sweet potato (because of course I did) and half an avocado (I’d already eaten all the avo that came with it in the first place), plus a dollop of Greek yogurt and some hot sauce. My mouth is watering just thinking about it now. 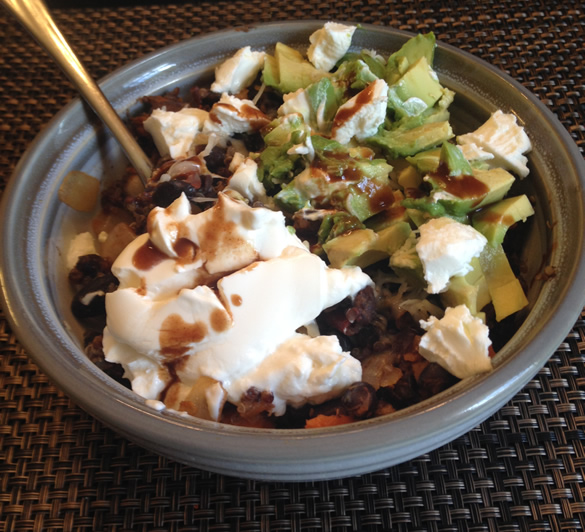 I worked a few more hours (I tell you, the thrills? They never end around here!), and then realized I was just toast. I’d had a number of early morning workouts and not-so-early nights, and I was just exhausted, so as soon as I hit a good stopping point, I climbed in bed for a late nap. This is a terrible idea, by the way — it takes away any possibility of being social or anything that night, but makes it so you can’t fall asleep at a good time to get up early the next day.
But, my eyes were closing, so I listened to my body and hit the sheets for an hour, after which I woke up and realized I had a bike workout that was considered key for that week, and there was no way to work it in over the weekend, so I slipped into some biking clothes, fed the dogs and cat, drank a Naked Juice (very sweet but really tasty with no added sugar) ,and hit the gym again. 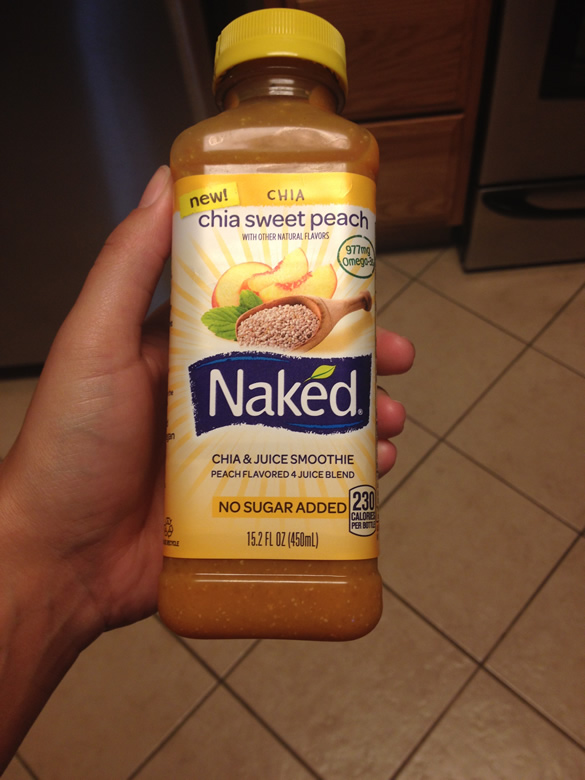 By the time I’d finished my second workout of the day, it was almost 9 p.m. and I wasn’t starving, so I reached for the Greek yogurt yet again, this time with some local honey, a bunch of fresh berries and some Bear Naked granola. 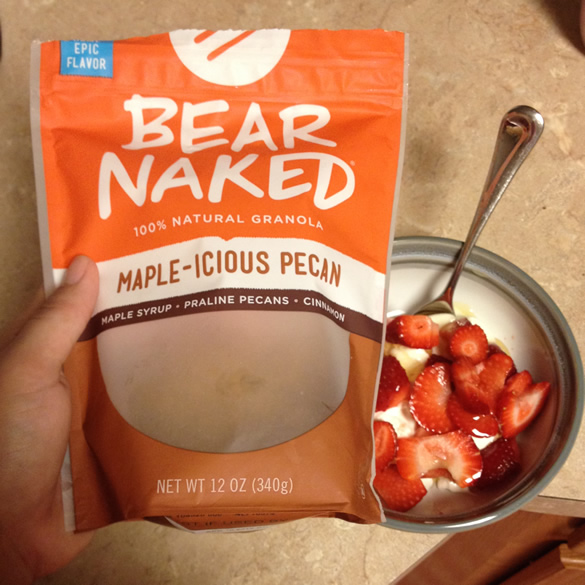 And, because I was craving a little treat, I snacked on a couple pieces of Brownie Brittle that my husband’s boss had sent him, and it’s quickly become one of my new favorite things. My god, the sea salt caramel flavor? I can’t even. 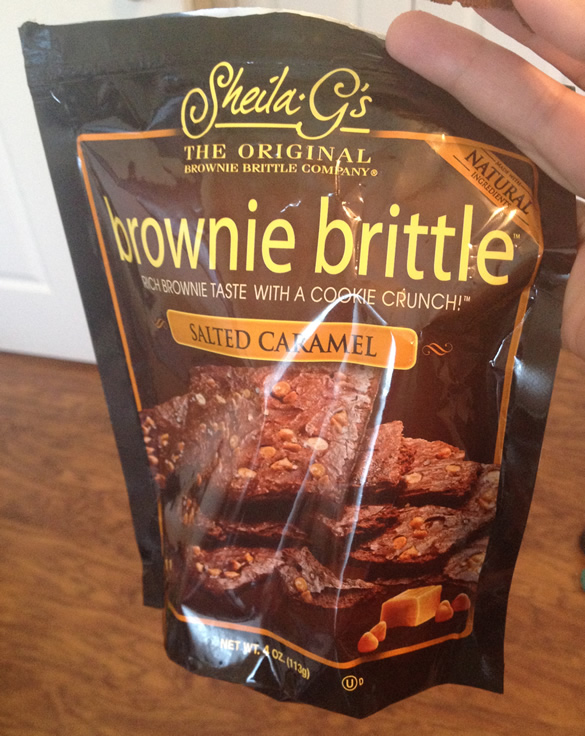 This ended up being a pretty light day for me as far as food was concerned, but I wasn’t consciously cutting back — I was just busy and not terribly hungry. That’s the interesting part of my intuitive-eating journey (and I’m still not great at it, just to be clear) — there are days when I want to eat ALL THE THINGS even though I haven’t been so active, and then there are days like this, where I’m busy and sweaty and going nonstop, but I don’t need a ton of food to feel satisfied.
How do you handle eating during particularly busy days? —Kristen