She did it! She hiked Havasu Falls! Today Kate from our Take a Hike With Kate series shares the awesome details of her epic hiking adventure! 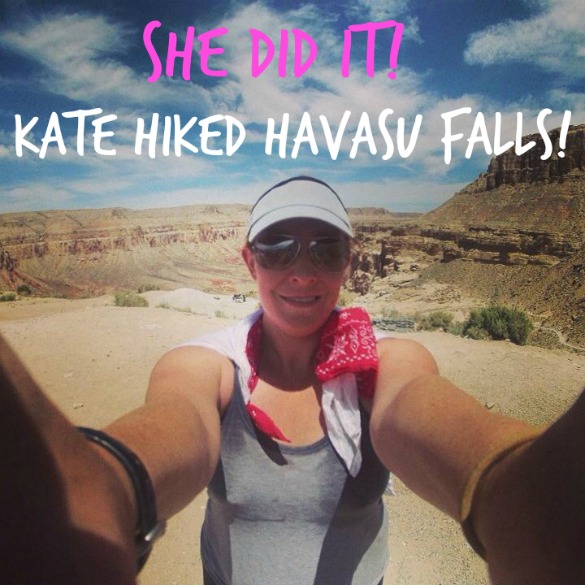 After months of training, it was finally here: my big hike to Havasu Falls on the Havasupai Reservation in Northern Arizona! An 11-mile trek with desert waterfalls waiting at the end? I just knew it would be amazing. It’s a hike that has been on my bucket list for a while and with help from Arizona Outback Adventures (AOA), it was going to happen. I tripled checked my packing list at least a dozen times and headed over to the appointed meeting point in Old Town Scottsdale.

The group heading to the canyon was very diverse, ranging in ages 10 to 60-plus, including extended families from all over the country and Canada and some solo travelers like myself. Clearly, Havasu Falls continues to be held in high esteem around the country, and the world, if people are willing to come to Arizona in June just to see it.

On the drive to our hotel accommodations, guides from AOA explained about the topography and weather patterns that make each environmental zone in Arizona different. After about four hours we arrived at the Grand Canyon Caverns Inn, located about an hour and a half from the Hualapai Hilltop where the hike begins. The group was briefed at dinner on what to expect and how to pack our gear for the packhorses, and we all settled in for a good night’s rest before three nights of camping in the canyon.

We arrived at the Hualapai Hilltop about 7:30 the next morning and began the descent into the canyon. 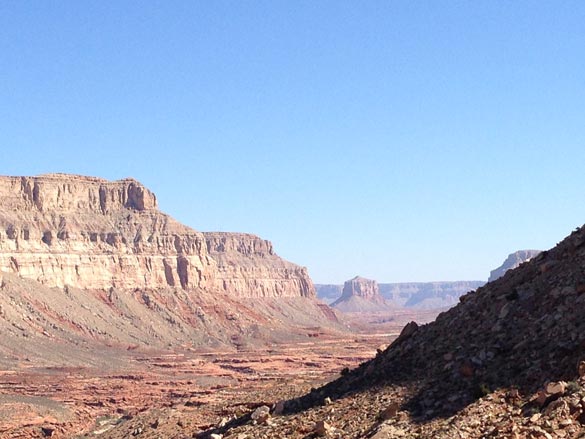 The first few miles are so steep and downhill you can’t really go quickly. The switchbacks eventually end in the sand-bottomed canyon. Every now and then, we yielded to pack horses, which not only deliver supplies to the canyon, but also deliver U.S. Mail to the Supai village! 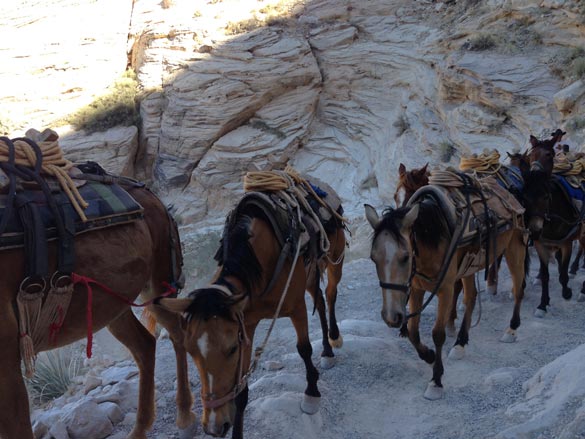 It was hot outside yet the initial hike is beautiful, as the sandstone walls grew around us. We stopped for a trailside lunch near a rock formation called “Man meets Bear,” and we dined on an awesomely fresh lunch options that the guides packed, including fresh fruit and all of your favorites from Trader Joe’s. 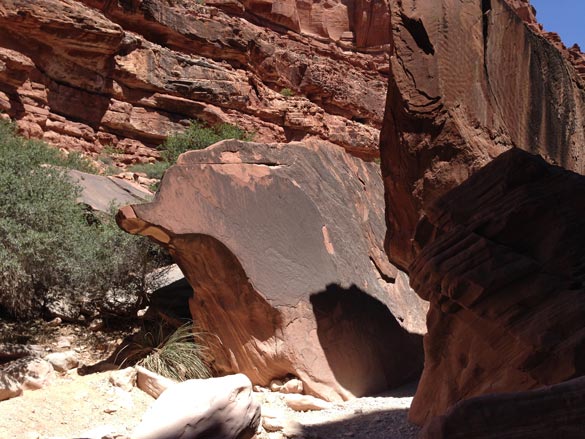 The group began to spread out after lunch, and I found myself keeping pace (in some cases attempting to keep pace) with the other two solo hikers: a fellow journalist from Denver and a marathoner from Canada. About mile 8, river water appeared and after stopping to cool our feet, we reached the village of Supai. Supai is a carless community of mostly Havasupai people at the bottom of the canyon. At first, it seems strange, yet welcoming. Cows and horses roaming freely, small plots of farmland and kids playing in makeshift play areas. After all, this is technically the most remote community in the lower 48. One look around and it seems pleasantly simple and noticeably, a tight-knit community that adheres to a slower pace of life. The one noise that occasionally “disrupts” your daydreams in the village is the helicopter that carries visitors and tribal members in and out of the canyon.

Continuing on past the village, I was ready to see some waterfalls. The landscape becomes more shady (very welcomed) and soon, waterfalls appear … but — I’m not there yet, there’s a few miles to go. What a tease! Finally, just when I was so hot I started pouring water over my head to cool down, I saw the very steep hill that I just knew was the last portion of the trail before Havasu Falls. Loud and pounding, the falls seem to come out of nowhere. An oasis. What a welcome site! 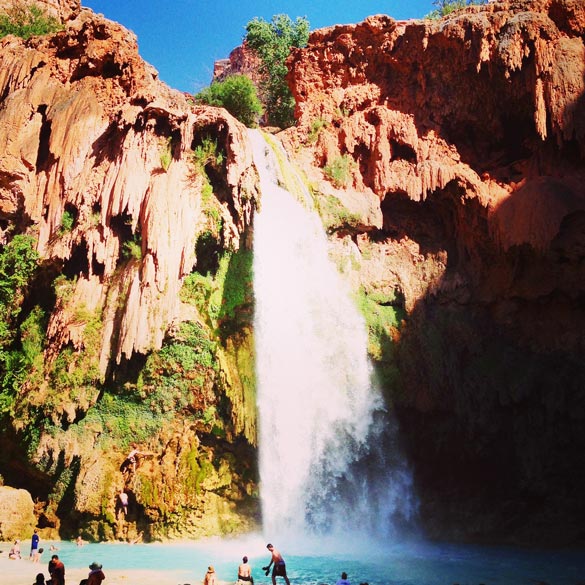 Getting to the falls is a little tricky and the day we arrived (a Friday), it seemed crowded. But there’s a reason everyone is here: it’s beautiful. It stops you in your tracks. The color of the water is bright blue, and it’s the clearest water I’ve seen in any of my travels — enhanced by a natural “floor” of white travertine. The blue sky and red rocks just boost the scene. With huge smiles on our faces we had no want or hope of controlling, we all swam happily, watching dare devils jump from higher rocks and resting our legs in the cool water. 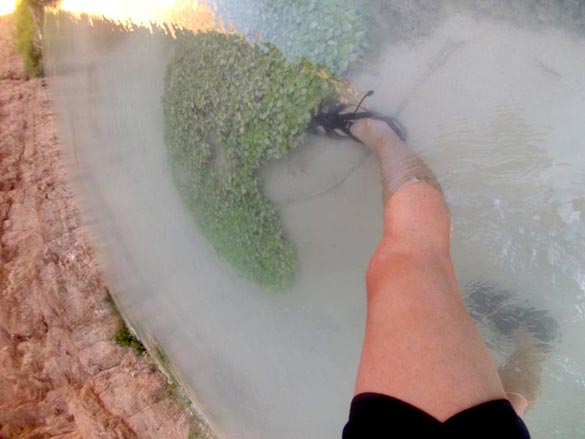 Our awesome camp was set up by the guides and was only a five-minute walk from the falls … and in close proximity to the composting restrooms. All of the tents were set up and dinner was on. Best of all, we were right on the river and against the canyon wall. Just down river from Havasu falls, our campsite felt so private. Tonight, we’d sleep under a full moon and with the sound of the mini falls in the river nearby. We needed a good sleep — tomorrow was a big day. 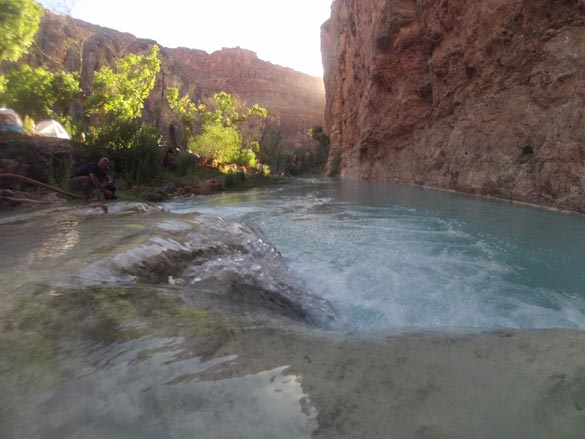 Day one at Havasu brought coffee, an awesome guide-made breakfast of eggs and more miles. About eight to be exact. We hiked a quick mile, past the natural spring, to Mooney Falls. These falls are actually the tallest in the canyon at 190 feet or so. Mooney Falls takes its name from a miner who fell to his death at the falls in 1882. As you might imagine, getting to the base of the falls is very, very tricky, and extreme caution is used to avoid meeting your fate there as well. You hike through two small tunnels and engage in a face-against-the-rock descent. Our guides briefed us on the way to handle this somewhat scary portion and managed to get everyone, including a group of kids, down to the base of the falls. In essence, you maintain three points of contact with the wall and use footholds and handholds in the rock, as well as some chains that have been installed, to climb down the rock face. There are some ladders and tricky portions but eventually, it was over and we were there. Whew! It felt epic! 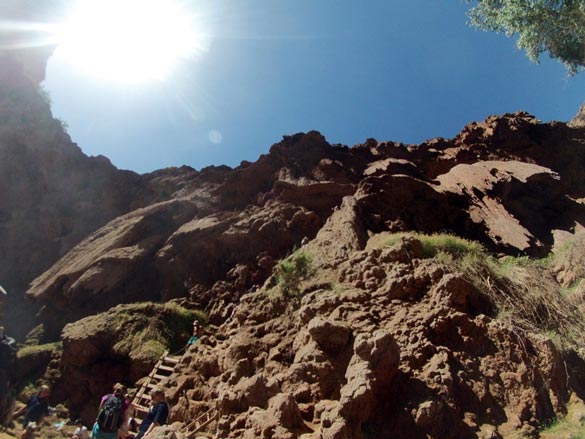 We took in the falls and then hiked to a little-known area called Ash Canyon for snacks and to snap some photos. This portion of the canyon was shady and full of grapevines. We changed into our water shoes and hiked a bit further down river, making several refreshing river crossings.

Earlier in the day, the other two solo travelers and a guide took off on a daunting 18-mile roundtrip hike down river to see where the blue waters of the Havasu River and the red waters of the Colorado river converge.

While that sounded fun, I knew I couldn’t do 18 miles on top of 11 miles the day before. But I still wanted an adventure. About three of us wanted to continue several more miles down river from Mooney Falls to Beaver Falls, and luckily we had a guide to join us. We hiked through challenging rolling hills along the river, full of rock and green grapevines. 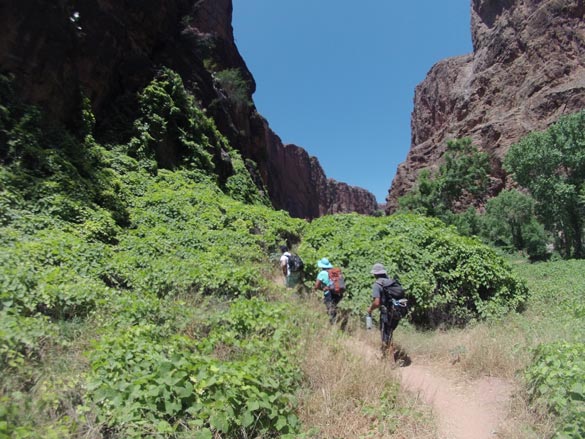 And then, we hit a plank. Yep, a twelve foot piece of wood that straddled a deep canyon. A “you’re for sure gonna die” if you fall canyon. Sigh. I had tired muscles, a heavy backpack and it was a hot afternoon. I was prepared for hiking and more waterfalls … I was not prepared for a circus trick. But, our guide James coached me through it, and I made it across.

Shortly thereafter, we made it to Beaver Falls. Earlier in the trip, I sort of made a “promise” to our guide Jason that I was up for some jumps of off rocks into the water. Now, I had to do it. It’s maybe a 12-foot jump … no big deal … but in order to jump safely, there are some rocks to clear. After a few moments of pause at the top, I took the plunge! What fun! I was ready to do it again, and I did! 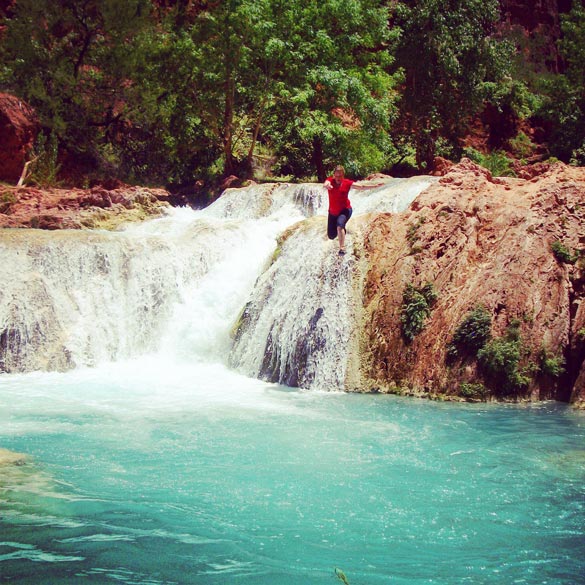 After a little lunch, it was time to head back to meet up with the rest of the group near the base of Mooney Falls, up river. On the return hike, the canyon plank was no match for me; my confidence was growing.

Needless to say, we all slept well that night. The guides did some work patching up the group’s feet, and they are truly experts at this — all of the AOA guides are certified wilderness first responders and very knowledgeable of the demands of hiking. It felt so luxurious to wake up in a canyon filled with greenery, cottonwood trees, blue skies, warm breezes and lazy rez dogs seemly guarding our campsite. It felt like each day was better than the last.

Our third day in the canyon was a bit more relaxing. We had a leisurely breakfast, once again prepared by our guides, and took some time to swim again at Havasu Falls. Since it was Sunday and many campers had departed, we had the place to ourselves! From there, we hiked a different direction to an old galena mine, which provided a glimpse into the past. From there we were shown some fossils and learned more about the geological significance of the area.

After lunch at camp, it was time to hike upriver (up those giant hills again!) and explore the falls we passed on our initial descent. First up was “Rock Falls,” a waterfall created by the massive 2008 flood in the canyon, and it proved a perfect place to swim! You can jump into the water from a ledge behind the falls, and we had fun swimming around and jumping with the kids in the group. A short hike farther up river and we were at “New” Navajo Falls. These falls are less friendly for swimming, but at 50-feet tall, these falls seem unbelievable.

Our guides had mentioned “Hidden Falls,” some rarely visited falls as they can’t be seen from the trail. It would have proved a little too challenging for some members of the group, but myself and the two other solo travelers asked Annemarie, to guide us in. Some scrambling on the rocks above the river was worth it. We had these falls to ourselves, and the water was cool and deep. Once again, I had promised I would jump and this one was a doozy. After watching the guys do the jump, I knew I had to do it to. To do the “big” jump, I followed Annemarie as she climbed up 30 feet of rock. That alone was pretty scary. Standing at the top, completely exposed made me a little nervous. (Why did I do this again?) I could feel the blood draining. But I know Fit Bottomed readers would expect me to take the plunge. And, I did! Fun and yet terrifying, I’m glad I did! Afterwards, to document the location, I sent a fellow traveler up with my GoPro to record the experience just for you all! It was a great way to end the day.

The last day was the hike out. After many miles hiked on the trip, we still had 11 more miles to go. The first nine miles were moderate, but the final two miles that climb 2,500-feet were admittedly brutal and I felt myself literally giving it my all at times. When I finished, I knew I had done something special and had a moment to give thanks for being able to accomplish my goal. To think that all of my fitness training had made this trip possible only serves as motivation to plan my next adventure.