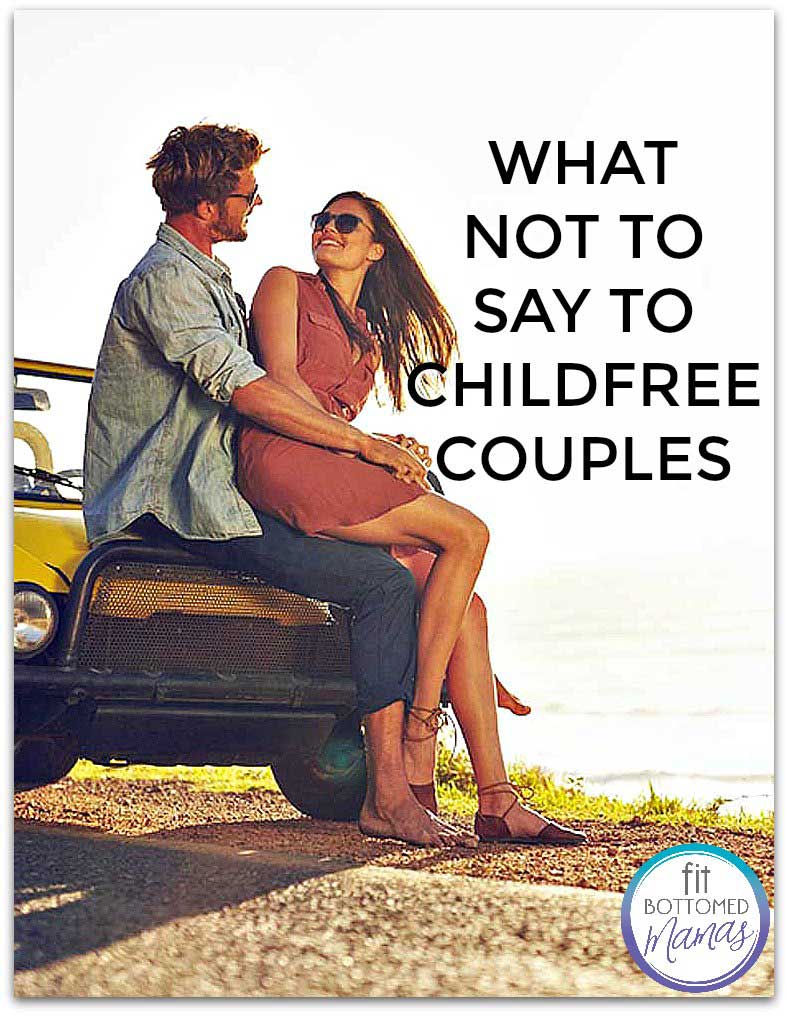 Hi. My name is Kristen, and I’m childfree by choice (which is why, although I’ve been writing for Fit Bottomed Girls for years and was involved with Fit Bottomed Eats from the get-go, you’ve never seen me over here). But today, I’ve got a few thoughts I’d like to share with all the amazing parents (and wanna-be parents) out there.

My husband and I have been happily married for 10 years. We’ve traveled, we’ve landed jobs we love, and we’re in the process of following one of our big dreams — moving closer to the ocean. We’re both in our thirties, we’re active and healthy, we’re financially stable, we come from loving, solid, supportive families with whom we have wonderful relationships. We’re devoted pet owners, and I like to think we’re the kind of people our friends know they can count on. On paper, we probably look like we should be joining all our friends in posting oodles of first-day-of-school photos right now.

But we don’t have kids. And as of now, we do not plan to.

That wasn’t always necessarily the plan. When we were dating and first married, I was in my early twenties. Having kids didn’t sound like a good idea then, but I assumed my biological clock would start ticking at some point and I’d have babies on the brain by the time I turned 30.

Now, I’m positively thrilled when a friend announces the pregnancy they’ve been hoping for, but that desire to conceive? It’s totally foreign to me. I’m not a cold person (I cry at sappy commercials on the regular), and no, I don’t hate children. I just really like being able to hand them back to their parents when I’m done. Sure, I will hold your sweet, sleeping baby for a while if you’d like, but there’s zero chance of that making my ovaries flip. (Show me a puppy, though, and I just melt. Go figure.)

There have been a lot of articles about being childfree following the TIME article about why childfree adults are not being selfish, and while I don’t necessarily want to throw yet another log on the fire, I’ve noticed that many focus on what not to say to a childfree woman, rather than to a couple, and I think that can be a somewhat different — and potentially more complex — issue since it’s not just one person’s decision, but (hopefully) a decision they made together.

10 Things NOT to Say to a Childfree Couple (and Why)

1. When are you going to start popping out some kids? Let me be clear: I don’t necessarily see a problem with asking people if they plan to have kids. Although this topic should be approached with caution, I understand the curiosity. My issue is with the “when” part of the question — it means you just assume we’re going to, because that’s what everybody does and it’s normal and not having them is … not normal. It’s a quick way to put your childfree friends on the defensive, even when you probably don’t mean it that way at all.

The other problem with “when”? It makes the assumption that we’re able to. If a couple has not discussed their fertility (or lack thereof) with you, do not assume that they’re simply putting off the baby-makin’. You have no idea what kind of factors are at play here.

2. Doesn’t your spouse want them? Ideally, the couple you’re talking to is totally in sync on this topic and they can easily answer, “Nope!” But in many cases — and mine is one of them — one half of the couple feels much more strongly about it than the other, making this a touchy topic that’s particularly awful to discuss in front of other people. And this is true with every other item on this list — before you speak, please think about the fact that just as infertility and miscarrying and lots of other baby-centric topics are personal and emotional, so is this.

3. Don’t you want to have a family? Aren’t we enough? You might’ve felt like something was missing before you added little ones to your brood, but we feel whole and complete as a family of two. That’s not a slight on you and your choices, but we’re cool as is.

4. You’ll change your mind. No. Just. Effing. NO. Especially if you don’t know us at all. I can’t tell you how many strangers, most of whom have been considerably older than me, have said these exact words to me with a wink and a knowing, smug-as-hell smile. Are you also going to tell me that I’ll change my mind about not eating meat? Writing a novel? Don’t presume to know someone else’s mind on a topic this weighty.

5. Aren’t you worried you’ll regret it? Honestly? Sometimes, yes. I think my husband and I both worry about waking up in 10 or 20 years and feeling like we made a mistake. But that slight concern is far preferable to having a child because we were worried, and then, in 10 or 20 years, feeling like we’ve missed out on all the cool things we really wanted to do, all because we opted to have a baby instead. There are lots of things I worry that I’ll regret later — the new couches we ordered, investments we’ve made, friendships I’ve allowed to lapse — but it all seems to work out in the end.

6. Who’s going to take care of you when you’re old? Whether we were to have kids or not, we wouldn’t plan to put the burden on them.

(Not to mention, do you know who gets to hear all the complaints about the trials and tribulations of parenthood? The childfree folks. So, yeah, I kind of do know what I’m missing. I hear the good, too, but I hear a lot about what I’m missing on both ends of the spectrum.)

8. Are you just worried about pregnancy and labor? It goes by before you know it. If that were the only hold up, I doubt that would hold most childfree couples back. I’m a triathlete — I don’t really have an issue with prolonged discomfort. It’s more the, uhhh, 18 years or so after labor that holds no appeal.

9. But you’d be such great parents! It might sound cocky, but, we know. We also would be fantastic competitive swing dancers and might have more potential as a tag team in professional wrestling than you’d think, but, alas, not all of our talents can be put to good use. We’ll just use our skills to be fantastic godparents and aunt/uncles to our friends’ children. And please do not insinuate that it’s our responsibility to have children — the world’s population is not going to suffer because of our choice.

10. What if your parents hadn’t had you? Well, then we wouldn’t be here, and we definitely wouldn’t be having kids.

I truly hate feeling like I have to defend this lifestyle choice, and it’s hard for me to understand A) why people feel so insistent that my husband and I have to reproduce, and B) why total strangers and casual acquaintances think it’s an appropriate issue to press. I wouldn’t dream of asking someone I didn’t know well why they chose to have so many kids, and whether they’re afraid they’ll regret it, you know?

I’m open to discussion, though: Have you found yourself saying any of these things to your childfree friends? If so, did any of my points give you pause? Or do you have some notes you’d like to send my way? —Kristen