In case you missed the exciting news, it’s Guest Bloggers’ Week! And today David James — a running enthusiast from NordicTrack, maker of treadmills and other fitness equipment — is sharing the best five podcasts to listen to while you run! 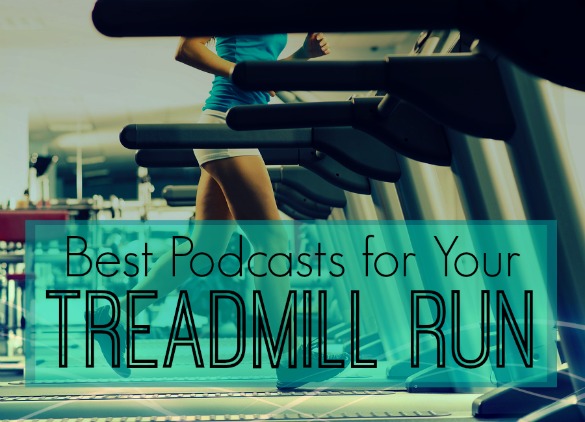 Running can be monotonous if you don’t have anything to keep your mind occupied. This often leads to people giving up on their treadmill workout routines altogether.

Podcasts can be great motivators, as long as they’re interesting and inspiring. Some runners like long narratives and lectures, others are into motivational speakers and meditation podcasts. Either way, the goal should be to use what works to distract you from running along in the same place for 30 minutes or more.

What to Listen to While You Run: 5 Podcasts to Run By

New to podcasts? Then, you may need a little assistance figuring out what to listen to while you run on the treadmill. Here’s a list of five podcasts to get you going (and don’t forget the Fit Bottomed Girls Podcast, of course!):

1. Comedy Bang Bang. Many people consider this show to be a bit weird. But, it’s also unique and consistently hilarious. It’s hosted by Scott Aukerman, who some have described as a bizarre parody of a serious talk show host. He tends to invite well-known actors and comedians to the show, or comedians who make a living impersonating actors. On this podcast, they discuss work, do some freestyle rapping and play games, such as the popular “Would You Rather.” After listening to an episode of this combination comedy show-talk show, you probably won’t find yourself feeling any smarter. But, you will feel sillier.

2. How Was Your Week? This interview show is hosted by writer and comedian, Julie Klausner. It opens each week with a rambling monologue that ponders the week’s cultural and political events in a very hilarious manner. Klausner also gives airtime to the important capers of her cat. Her interviews with musicians, performers and writers are informal and far from dull. These interviewees tend to be extremely fascinating literary types and characters that are larger than life.

3. Stuff You Should Know. This podcast is perfect for those shorter, 30-minute treadmill workout routines. It comes out two times each week, and provides education to its audience on diverse topics. Its entry point is that of pop culture. The recurring theme of the show is “How _____ Works”, which can be about chess, chocolate, werewolves, even castration. This show brings shock factor by discussing topics you never even knew you’d be puzzled about.

4. Bullseye. This podcast is an interview-style program. It’s targeted to attract a younger audience with its focus on comedians. Guests are culture and arts personalities, who are interviewed by host Jesse Thorn of NPR. He’s a great curator of recommended pop culture topics each week. Expert guests bring to the show thoughtful pieces on hip hop music, video games, new novels and more. Bullseye used to be known as The Sound of Young America.

5. Wait Wait … Don’t Tell Me! This particular podcast is a radio news panel game show. It’s hosed by Peter Sagal, a contributor to Runner’s World and NPR host. It features contestants who take part in various competitive challenges. You’ll always get some good laughs out of it. And, playing along has a way of making your hour-long treadmill run fly by in no time at all.

What’s your favorite thing to listen to when you run? —David