I love seeing inspiring before and after photos of people who have embraced a healthy lifestyle. There’s nothing like real-life results, right?

Except, sometimes those “real-life results” are anything but real. Heck, a strategic pose and some lighting can drop plenty of pounds, and anyone with access to a computer can alter a photo to slenderize the subject. And while the legitimate photos are awesome and motivational, Photoshopped images are a serious let-down.

But how can you tell if a photo has been staged or edited to make someone appear slimmer or more fit than they actually are? We got a few pointers from Serban Enache, CEO of global stock photo agency Dreamstime, for picking out the fakes. 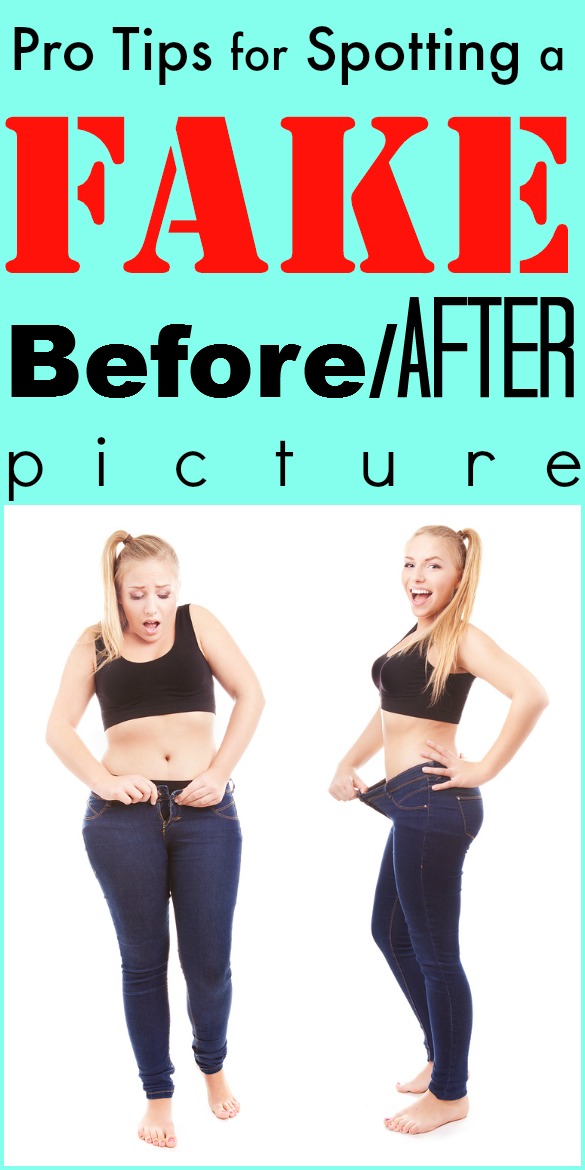 Invasion of the Body Snatchers

“Many of those models are not even the same person,” says Enache. “Although the main features might be the same (hair color and style, body stance), details might reveal that the models are different.” So, look closely before getting sucked in — people might look different after weight loss, but not that different.

It’s not hard to use a photo-editing program to take the face from a photo of the “after” subject and pop it onto a photo of the body of someone larger to create the “before” image, Enache says. “At web resolution, the traces left by the manipulation are rather hard to see. You just have to pay a close attention to the neck and face area.” There might be harsh color tone or texture changes, or a visible border.”

Also, look at the positioning. “The added-in Photoshop face will sometimes have an unnatural position, not being centered on the neck or being strangely tilted; or even more obvious will be a face looking to the side, placed over a head and body facing front. Beware of unnatural light and shadow angles as well,” says Enache.

It’s not hard to stick out your belly to look heavier for a before photo, but Enache had a few other things to watch for:

And, as anyone who’s ever tried to find the most flattering angle for a photo (yes, I’m raising my hand, too) can attest, there are ways to make the subject look even thinner for the after picture as well. Enache suggests keeping an eye out for the following in comparison to the before photo:

If nothing else, always use common sense. If it looks too good to be true, chances are good that it is. And, even if that’s not the case, don’t ever determine your self worth by someone else’s photos. When it comes right down to it, whether someone else’s photographic evidence of weight loss is real or not shouldn’t impact you. If it inspires you to stay committed to eating well and being active, that’s awesome! But it doesn’t mean you aren’t already fantastic exactly as you are.

Were any of these tips surprising to you? —Kristen

Add a comment Cancel reply
5 Comments
Jenn & Kristen
Diets don‘t work. We know because we‘ve been there.
Get the deets
STAY IN THE KNOW
When new stuff happens, you'll be the first to know!
Latest Offer
Working out at home
Get free strength, cardio, yoga, and meditation videos.
Try them
Podcast
Podcast Ep 137: That’s a Wrap!
Instagram
X