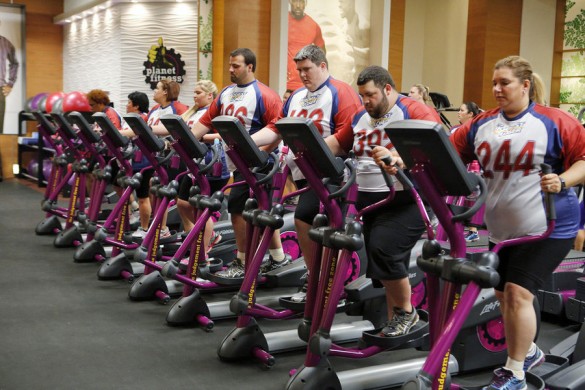 The contestants hit the gym for the first time this season. Credit: NBC

* SPOILER ALERT!* We’re recapping tonight’s episode, so avert your eyes if you don’t want to know what happened.

Jocks — they’re just like us! On tonight’s Biggest Loser season 16 premiere, we learned that obesity can creep up on even the fittest among us. Twenty former athletes — champions in pro football, tennis, rugby, cheerleading, wrestling —gathered in a football stadium to start their Biggest Loser journey, and they got to meet trainers Dolvett Quince and newbies Jessie Pavelka and Jen Widerstrom, who entered in dramatic (and very attractive) fashion. But first, bring out that giant scale!

Woody’s story was especially heartbreaking. The former arena football player lost his wife less than a year ago, and he promised her that he would take care of himself. “My oldest son said something yesterday. He said ‘Dad, you promised me. We already lost Mom.’ He said, ‘We don’t want to lose you, too.’ I said ‘You know what, Son, I’ll be around. I promised you guys that. I promised your mom and I promised myself.’”

Dolvett asked him if he would keep that promise. “Yes, sir,” Woody said with tears in his eyes.

On to the gym for the first workout!

From Dolvett: “I’m kinda like a kid in a candy store,” he said with a gleam in his eyes.

All the trainers loved the fact that the contestants were former athletes and able to hit the ground running (guess we won’t have anyone falling off the treadmill this season).

Well, we spoke too soon. JJ passed out after pushing himself on the treadmill. Afterward, the former college football player sat down with Jen and told her that while it felt good to get back in the gym, it was more difficult than he expected. But he’s dedicated to change because he has a much younger brother and wants to be a role model for him.

The first challenge involved all sorts of apparatus: Ever try to roll a squishy stability bowl up a sandy, hilly slalom? Didn’t think so. The prize is that the contestants get to choose their trainers. But the two people who finish last will be eliminated and have to go home (or would they … ?) 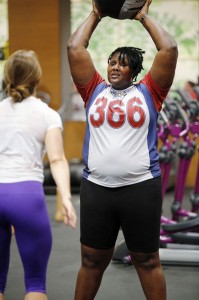 Vanessa was one of the first contestants to leave for Comeback Canyon. Credit: NBC.

Zina was completely physically exhausted, and Vanessa pulled a muscle, so they not only didn’t finish but they ended up being treated by the show’s medics. Everyone else had their trainers, and Vanessa and Zina packed up their belongings for the trip home (or was it … ?)

Okay, we know that they weren’t going home.

Their stretch limo pulled onto a dirt road, and a mysterious character with tattoos and skull socks opened the car door.

He’s ensconced at the Biggest Loser Resort in Malibu in a little corner of the place called Comeback Canyon. Every week two people there will compete; one will stay and one will go home. This week they had to stock Bob’s lair with two people, so that’s why Vanessa and Zina were both eliminated. Next week, the person eliminated from the ranch will compete against the last person standing this week. At the end of the season, Bob’s Comeback Canyon champion will compete as a finalist in the Biggest Loser season 16 finale.

Vanessa was angry that her body wasn’t doing what it used to do, and she was frustrated. Bob sensed that. “Your mind has got to be the strongest part of your body right now,” he told her.

Meanwhile, back at the ranch (couldn’t wait to use that!), we saw a huge brace on Mike’s leg. He tore his meniscus so working out will be a huge challenge.

Bob decided to dress up for his little two-person weigh-in. Zina lost 8 pounds this week, and Vanessa lost 14 pounds. Vanessa beat Zina in poundage and percentage of weight loss so Zina is going home today.

Each person weighs in as part of a team; the team with the lowest percentage has to vote off one member of their team. How’d they do?

That was not what Damien expected. The blue team found themselves in the elimination hot seat. Unlike the past couple of seasons when the voting went behind closed doors, we went back to the old serving trays. Everyone seemed to be voting for everyone else at first, but the majority ended up voting to eliminate Andrea.

There were inklings early on in the episode that Andrea was struggling and perhaps her teammates sensed that in choosing who to eliminate.

But just like Zina and Vanessa, Andrea’s elimination limo — let’s call it the Elimi-Limo! — pulled up to Bob’s Comeback Canyon, where she’ll go up against Vanessa next week.

She is now down 40 pounds and is coaching a top junior player who went up against Serena Williams at the recent U.S. Open in New York.

What to Expect Next Week

Dr. Huizenga meets with the contestants to discuss their medical exams and what the future holds if they don’t lose weight. One contestant finds the news too much to bear.

What do you think of Bob’s Comeback Canyon? —Gail