It doesn’t seem like all that long ago that many people were still trying to figure out exactly what “vegan” meant. (“That’s the one where they don’t eat the cheese, right?”) But now, even those of us who spend our working and leisure hours surrounded by the latest in foodie vernacular could be excused for missing a term here and there. It seems like there’s a new one every other week!

In the interest of keeping all our readers in the loop, we’re sharing a few words we’ve heard bandied about with increasing frequency, along with their definitions. Did we miss any that you’ve heard lately? Let us know in the comments and maybe we’ll put together a Part 2! 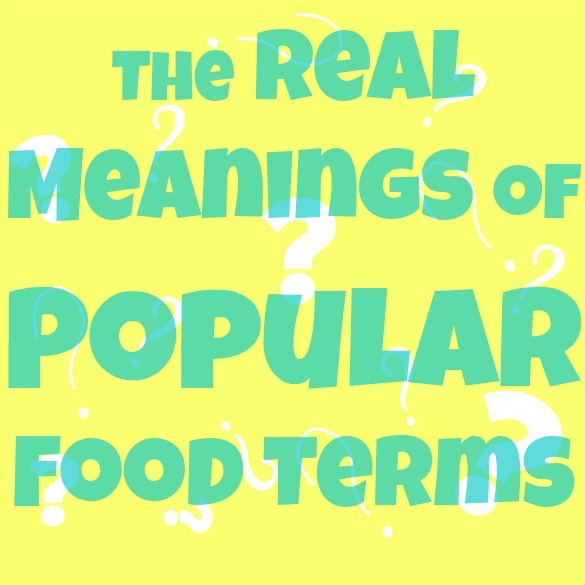 Freegan: An activist who scavenges for free food (as in waste receptacles at stores and restaurants) as a means of reducing consumption of resources. –Merriam-Webster

Hydrophilic: Literally, “water-loving,” but as it pertains to nutrition, it’s a focus on foods with higher water absorbancy than your typical foods, like chia seeds. –Decision Nutrition

Intuitive eating: Eating according to your true hunger and your body’s needs. –Intuitive Eating

Locavore: One who eats food grown locally whenever possible. –Merriam-Webster

Orthorexia nervosa: Although it’s not officially considered an eating disorder, it’s an unhealthy obsession with an otherwise healthy way of eating. Orthorexics don’t fixate on calories or weight, but rather on eating completely healthfully all the time, punishing themselves for slip-ups by stricter dietary restrictions or even fasting. –National Eating Disorders Association

Paleo: A diet focused on eating real, whole unprocessed foods that are more healthful than harmful to our bodies. –Nom Nom Paleo

Pescatarian: One whose diet includes fish but no other meat. –Merriam-Webster

Probiotic: A preparation (as a dietary supplement) containing live bacteria (as lactobacilli) that is taken orally to restore beneficial bacteria to the body; also: a bacterium of such a preparation. —Merriam-Webster

Phyto____: Plant foods contain thousands of natural chemicals. These are called phytonutrients or phytochemicals. “Phyto” refers to the Greek word for plant. —WebMD

Vegan: A person who does not eat any food that comes from animals and who often also does not use animal products (such as leather). –Merriam-Webster

Vegetarian: A person who does not eat meat. –Merriam Webster

Did we miss any words that you’re curious about, or give you some insight into one that you hadn’t known before? —Kristen