At any one given time, I probably have four to-do lists going. There’s the daily work one, the longer-term work one, a home one, and now, of course, a baby to-do list. I’ll admit — making to-do lists gives me peace of mind because I have to remember less. It’s written down! And the feeling of crossing things off of my to-do list is amazing. I love it. LOVE IT.

But, what happens when you get overly ambitious and start drowning in your to-dos? Or you feel like a failure on any given day — weekend or not — because your to-do list isn’t checked off in the least? Or that one nagging thing that’s been on your to-do list for, like, a year, and still isn’t done? Well, that’s kind of the opposite of feeling good, in control, organized and/or productive.

And I’ve oscillated between those two feelings — 1) Pats on the back for me, my to-do is done! OR 2) Woe is me. Why do I feel like I get nothing done?! — for years. (It really, really is like this.) So when I stumbled upon Danielle LaPorte’s Stop-Doing List idea, I was like, yes. YES! I need a Stop-Doing list. Pronto!

With a baby on the way in February, I’ve never been more acutely aware of just how much my current life is going to need to change, flow and be more flexible. Marathon work days and workouts probably aren’t in the rotation for a bit. And I’ll need to lower both my expectations of myself and of my to-do lists — because I’ll have a whole new set of priorities and needs, many of which I can’t even fully plan for.

But what I can start doing is to, well, stop doing some things. Here’s my Stop-Doing List! 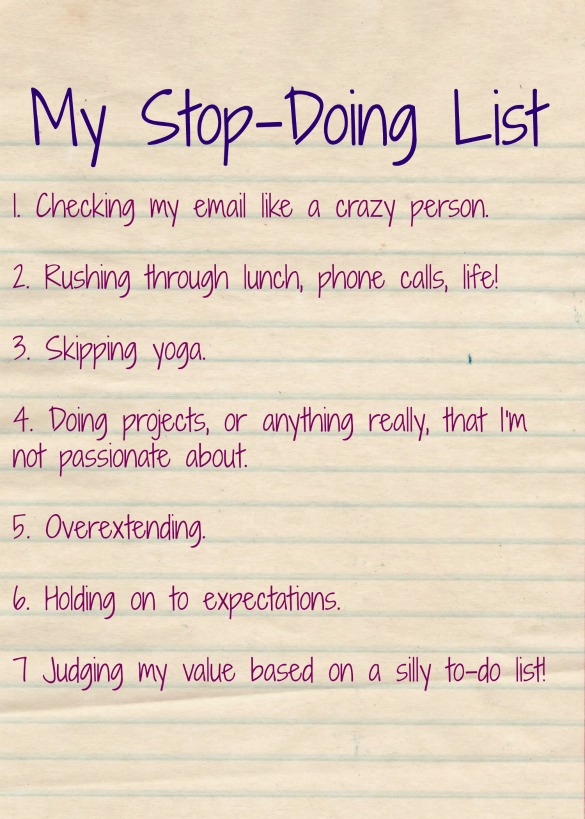 I’ll go ahead and add a number 8, too: any item on my to-do list that’s been on there for more than a month needs to dealt with in a whole other way, whether that means hiring someone to do it, chunking it into smaller, more doable pieces or simply deleting it entirely. Man, I feel better already!

Any other to-do list addicts out there? What would you put on your stop-doing list? Talk about feeling liberated! —Jenn