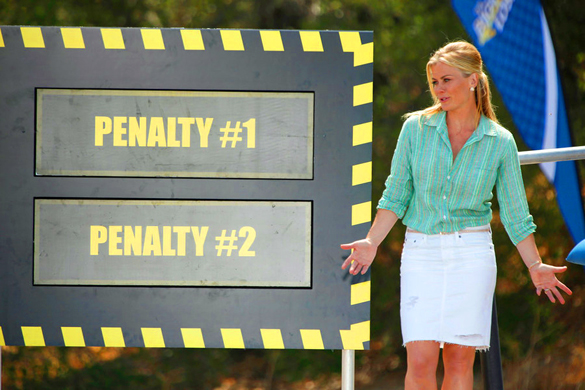 SPOILER ALERT!* We’re recapping tonight’s The Biggest Loser episode (get all the recaps here!), so avert your eyes if you don’t want to know what happened.

Week 8 kicked right off with a challenge — Scott, Damien and Rondalee competed for their respective teams on treadmills that got progressively faster. If they didn’t keep up, they’d be pitched backward into the water. Scott “gut-checked it out” and scored a first challenge win for the red team. The winner got to assign penalties for the losing teams — one of the penalties was housecleaning; the other penalty was a trip to Las Vegas.

Wait a minute — that’s a penalty?

The red team was counting on the white team hitting the bars and buffet tables hard. The mood turned somber as trainer Jen talked with Woody before he and his teammates left for Vegas. It’s where he lives, and he hasn’t been home since he went to the ranch. But it’s also been less than a year since he lost his wife to cancer. But they talked and Jen felt that Woody was in a good place now.

Once in Vegas, the white team entered their opulent suite and a tower of chocolate-covered strawberries and champagne were waiting for them. Woody popped the cork, poured the champagne and — ha, ha! — they dumped the bubbly back in the ice bucket. At the buffet lines, the white team skillfully maneuvered through, asking the chef how each item was prepared and dodged calorie bombs.

At Comeback Canyon, Bob had the mother of all competitions — literally. Bob wanted Gina and Jackie to realize that their needs were just as important as their kids’.

Quote of the Week

From Gina: “I get to see my family there cheering for me, saying ‘You can do this, keep going!’ And it just made me cry because I cheer for them all the time, but they’ve never had a chance to cheer for me.”

Over at the ranch, the blue team was cleaning up a pretty disgusting mess in the kitchen. Even trainer Jessie was pitching in with the mess.

Dolvett was loving it — his red team had the gym to themselves while the white team was in Vegas and the blue team was knee deep in dishes.

Back in Vegas, the shots were on the house but the white team wasn’t partaking. Instead they were in the pool, doing aqua aerobics and climbing the fake Eiffel Tower. Impressive!

Did Vegas do in the white team? How’d everyone do?

So, like last week, the team that thought they had an advantage found themselves up for elimination. And since there was a red line, Blake dipped below it and heads to Comeback Canyon.

Gina looks great and is down 65 pounds. Cheerleading, biking, swimming, golf — she’s doing it all, with her family in tow.

What to Expect Next Week

Are you ready for some (more) football stars? Michael Irvin, Donald Driver and Willie McGinest head to the ranch to mix it up with the contestants and do some Gatorade dumping. Also, there’s a chance to win video chats with loved ones.

Do you go overboard when you go out of town? —Gail