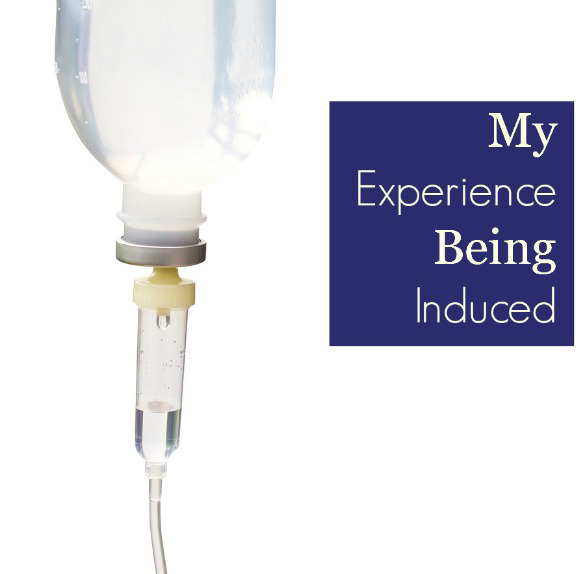 During birthing class, my husband and I learned of all the ways to tell when you’re in labor. We learned that I may be walking and all of a sudden feel a trickle down my leg. Or that this sharp, sudden pain would overtake my entire abdominal region. We learned that breathing would sound like Darth Vader, and you would grab your husband’s hand with a death grip. I could imagine all of this in my mind (partially thanks to the videos), and I even imagined what it would be like for us. I always thought I’d wake Jake in the middle of the night to say it was time, and he would anxiously drive me to the hospital. On our way to the hospital, I imagined us going through our contact list and waking everyone up. My bag was packed, the car seat was installed. It was all by the door, snacks included, for a grab-and-go.

It didn’t happen that way. There was no grab-and-go, and no Full House experience. I didn’t say it was time, someone else told me. On the morning of August 24, 2012, I was set to meet Jake for lunch. I did my hair and makeup (which was pointless considering it was over 100 degrees outside!) and was ready for a date with my husband. While I was putting on my mascara, my hands cramped up really bad, and I couldn’t hold onto the wand. I had been dealing with pregnancy-induced carpal tunnel syndrome for quite some time, but this felt different. The day before, my vision felt blurred and oftentimes I saw double. I felt very …. weird. I didn’t know how to explain it, but I felt weird. There was something about my body that felt off. With that weirdness combined with the hand cramping, I immediately called my husband and suggested he pick me up and that I needed to go to the doctor. A urine test confirmed my doctor’s concern — I was leaking protein into my urine and had onset preeclampsia — the one thing we tried to avoid with generous bed rest. The doctor wanted me to be admitted for observation for the night; I told my husband there was no way we were leaving without a baby.

During observation, Evan was showing signs of distress, and I was placed on oxygen. After a consult with the perinatologist, our doctor was more confident in her decision to induce. Our baby was 37 weeks, but did face the potential of a visit to the NICU. This sounded scary to me, but I trusted our doctor with every ounce of my being. She is the reason Evan has life, she has been a big part of our journey to have a child. When my prescription for pitocin was sent off, I cried. I was scared with the thought “it isn’t time,” but also nervous at the thought of medication forcing my body unnaturally into a natural state. Pitocin sounded scary. I looked ready, but I didn’t know if my baby was. The only way to tell was to deliver him. Just when Jake and I were deciding if this was the right thing to do, my blood pressure elevated and I had PIH (Pregnancy-induced Hypertension) and Evan’s heart rate dropped again. This was our sign — he was ready. Let the pitocin start dripping!

We made our phone calls to our parents, and focused on relaxing. I remember asking our nurse, who we fell in love with quickly, when I would know if my body is responding to the pitocin — she just said, “Oh, you’ll know.” Yep, I figured it out quickly! Pitocin is like an older brother, and I can say this because I have one! When you’re not expecting it, it’ll sneak up on you and stick with you no matter how bad you want it to go away. Its job is to make you miserable, much like an older brother! (I do love him, tons!) I’ll save you the details of my birth, but I will mention that if it weren’t for our amazing medical team, I would’ve been completely taken over by emotions and fears that could’ve negatively disrupted my birthing process. After 23 hours of contractions, August 25 had arrived — the day he chose to show his precious face. Evan made a quick appearance with the NICU nurses — just to flirt. He was a healthy little mister.

Through all of this I learned that although we spend our entire pregnancies planning, there is no such thing as a plan. What is the most important, to me, is building a relationship and trust in my doctor. That way if the time comes that the plan doesn’t go my way, I know we can make the best decision as a team.

Did your baby’s birth go as planned? Did you feel like you had total trust in your doctor? —Jennifer

Add a comment Cancel reply
1 Comment
Just for You
Working out at home
Get free strength, cardio, yoga, and meditation videos.
Try them
STAY IN THE KNOW
When new stuff happens, you'll be the first to know!
About Us
Jenn and Kristen are passionate about letting women know they're more than a number on the scale.
Get the deets
Instagram
X