A few years ago, FBG got to ask Ted Allen a question. We’re HUGE Chopped and Ted Allen fans, so clearly, this was a big moment for us. And, in true Ted Allen smart and sarcastic fashion, he had something to say about our name. (How could he resist?!) Since then, I’ve felt like Ted Allen and FBG are buds. Yes, it’s a touch delusional, but clearly he’d love FBG’s take on food, Fit Bottomed Eats, right? Right! So when the new Chopped Cookbook arrived on my doorstep, well, I felt like it was a gift directly from Ted to us. 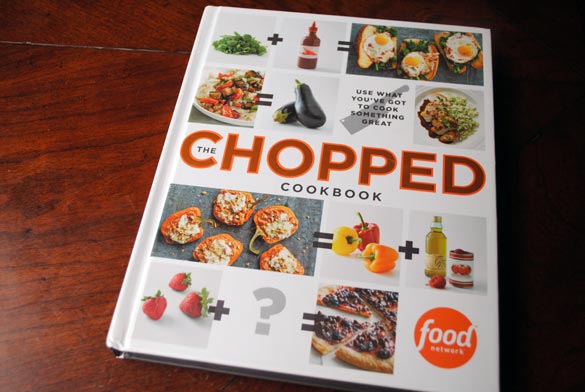 And what a gift it was … of all of the cookbooks — healthy and not as much — that I’ve reviewed over the years, I have to say this one has to be in my top 10. Nope, scratch that, TOP THREE. 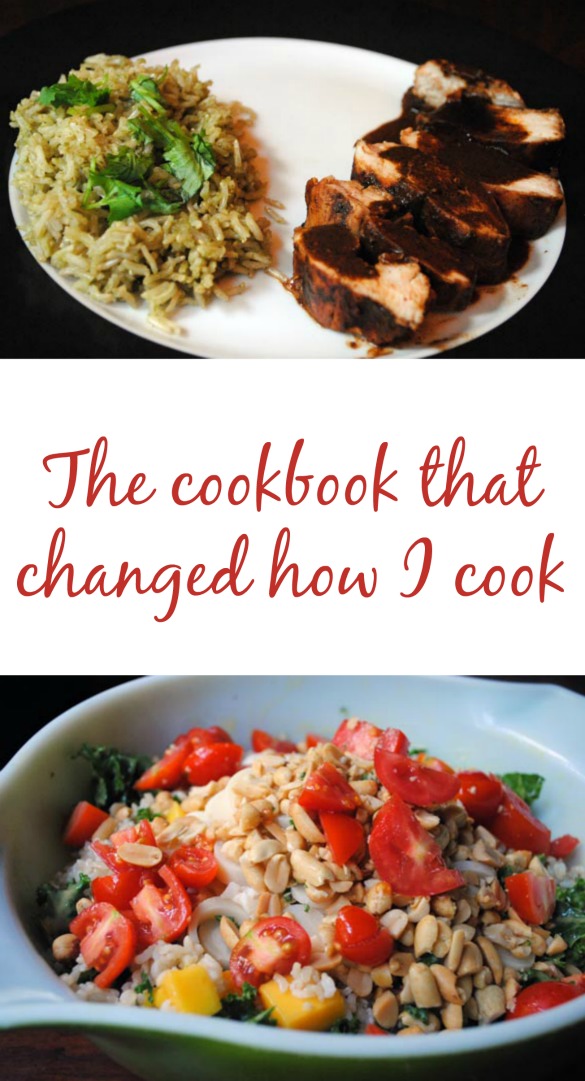 I love, love, love this cookbook! I originally thought I’d review The Chopped Cookbook by pretending I was on the show. I expected to get a few ingredients and then play with how to put them together. But that’s not really what this cookbook is about. While it is about experimenting and finding your own cooking jam, it’s more about just making damn good food. Food that’s healthy and fresh and whole — and really celebrates food as a whole.
While there are some foodie and fancy dishes, nothing is pretentious or overly complicated. All the recipes are pretty straight-forward, bright and delicious, and pretty quick to make. The cookbook is full of tips, tricks and guides (from cooking grains to what to keep in your kitchen pantry to fun pan sauces to try), and is great for the home cook who likes to cook and has done some cooking, but is looking to take his or her game up a notch, in a no-stress, no-fuss, intuitive way.
Using a lot of staples you probably already have in your kitchen, you can pick recipes of all different kinds. And I adore how the recipes are broken up chapter-by-chapter: pasta, chicken, eggs, flash in the pan, veggies, ground (more than just beef!), big salads (winner, winner!), fish, grains, easy desserts. It easily allows you to pick a main ingredient you have, and then find the perfect recipe to try from there.
While I dog-eared about a million pages to make, I settled on Nutty Tropical Kale and Rice Salad (p. 162) … 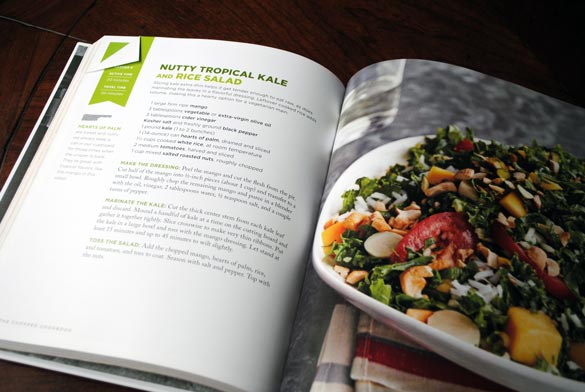 And Sauteed Chicken with Quick Mole Sauce and Cilantro Rice (p. 41) for dinner one night. 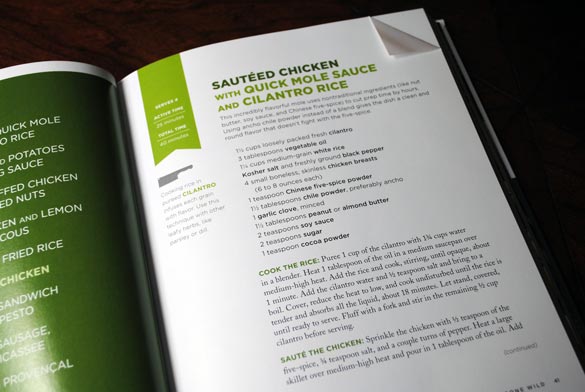 Both took about 30 to 40 minutes total to make, which was perfect for a weeknight. I made the kale salad first and then let it marinate in the dressing while I started on the chicken. The directions were easy to follow and — this is my favorite part of the cookbooks — both had rather inventive (at least to me!) methods in them that were quick and infused SO MUCH flavor in a short amount of time. Cooking these recipes really made me feel like a real chef — like I was getting the shortcut secrets they use. (Maybe not in the restaurant per se, but like, what they’d cook when they get home and need a quick tasty dinner.)
For example, in the kale salad, you use half a mango in the dressing (pureed in your blender with oil, cider vinegar, and salt and pepper) to give it sweetness and flavor (genius), and then the other half is chopped up in the salad itself. Also, you don’t have to massage the kale or steam it — you simply let the kale marinate in the dressing for 15 to 45 minutes. Brilliant!
Besides being visually beautiful, the salty crunch of the peanuts with the sweet mango and the tomatoes was so tasty. Plus, the tangy hearts of palm added more depth, while the cooked rice made this a kale salad that really sticks to your ribs. Definitely one I’ll make again and again — great for a crowd, too! 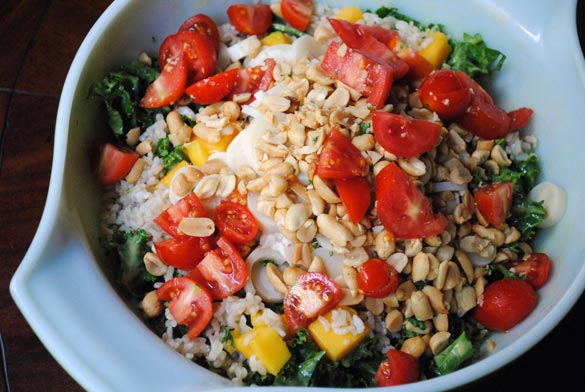 And then there was the chicken mole. I’ve only attempted mole once before, and it took a whole day. This recipe, on the other hand, takes 40 minutes total and uses nontraditional mole ingredients like nut butter, soy sauce and Chinese five-spice to get you a deep flavor in less time. The sauce itself was delicious on the chicken and was impressive for a weeknight meal. 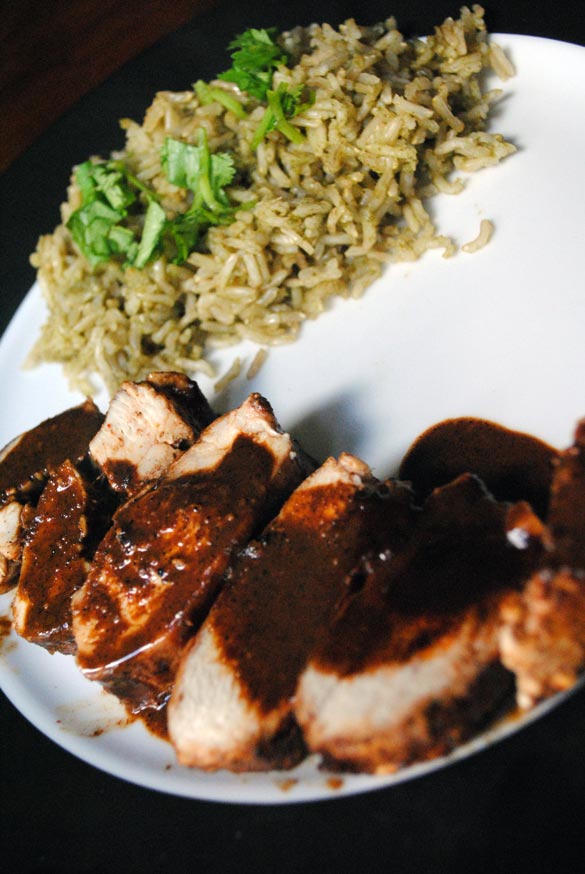 But, I have to admit, the standout star of this recipe was the cilantro rice! Yes, the rice! 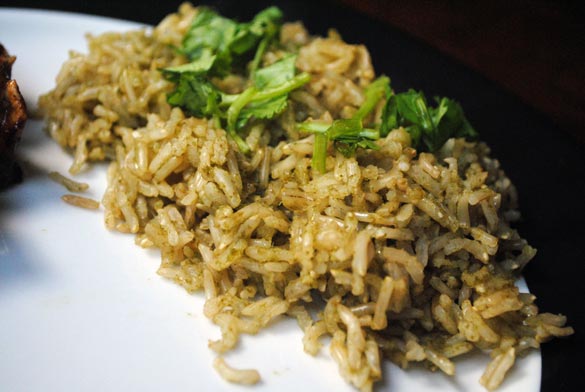 Teaching me yet another cooking trick that I will use forever and ever (amen!), you cook the rice not in plain salted water, but in water that had been pureed with a bunch of cilantro. This infused the rice with a cilantro flavor that was insanely good. My husband makes a baked rice sometimes on the weekends that takes about two hours to do, and I swear, this rice — which takes only 20 minutes from start to finish — has just as much flavor in far less time and with no cheese. I will never make rice the same way again! (And, if you think Chipotle’s rice has flavor, it has nothing on this cilantro rice!) I totally want to try the same technique with basil or rosemary or thyme … herb all the rice!
I can’t wait to make more recipes from The Chopped Cookbook. There’s a paella I have my eyeballs on, plus strip steaks (the Beef Council just sent me two that are dying to be cooked up!) and a warm salted caramel banana pudding that has my name all over it. If you are looking for a new cookbook to try — Chopped or Ted Allen fan or not — I cannot recommend this cookbook more. It’ll teach you tips and tricks that you’ll use for a lifetime!
What’s your favorite cookbook? —Jenn