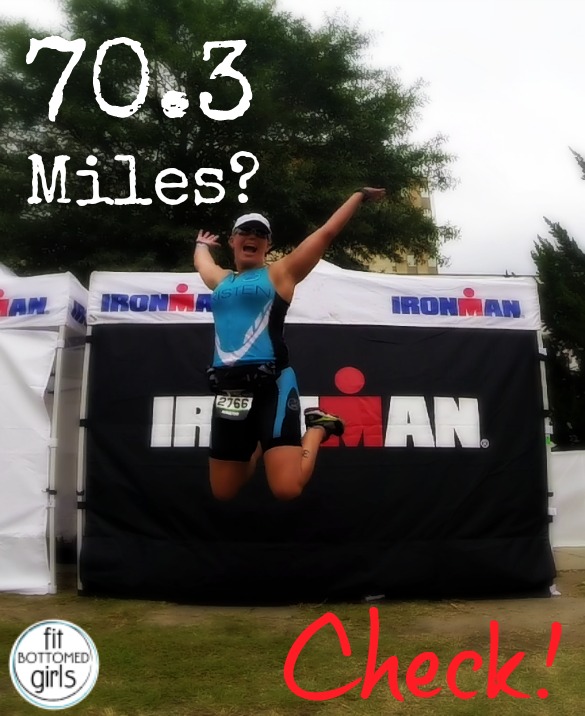 Math isn’t necessarily my strong suit, but over the last few weeks, a few numbers have been driven solidly into my brain — 1.2, 56 and 13.1 — all of which add up to the intermedix Ironman 70.3 Augusta distance of 70.3 miles.

The race, which was my first half Ironman distance triathlon, took place on Sunday, and we really lucked out with the weather. It was slightly overcast and maybe a bit humid, but loads cooler than anyone south of the Mason-Dixon line (like me) has been training in all summer. Basically, I had my ideal racing conditions handed to me … which was great, because my wave didn’t take off until 9 a.m., and when you’re racing an endurance event like this (and are not an elite athlete finishing in under four hours), that means you’re out on the course well into the afternoon heat.

I was nervous — like, tears in my eyes, breath catching in my throat, needing to take deep breaths to stay calm type of nervous — before the start of the swim. My husband, Jared, was there as the world’s best athletic supporter (har har), and he helped me get my emotions in check before leaving the swim start for the transition area. (Since the swim was downstream, the start was a full 1.2 miles away from where we got out of the water, meaning spectators had a workout of their own if they wanted to catch it all.)

It felt like I waited in the corrals forever (or at least more than the 20 minutes I was actually there), but once I got in the water, I was able to get focused. By the time the horn blew, I was ready to get to work, and I came up with a swim time I was really proud of at just over 25 minutes. I didn’t empty the tanks, but I definitely went for it since, well, it’s no secret that the part of triathlon I’m best at is the swim, and I wanted to have at least one good leg, even if the rest didn’t go well!

I know several people who’ve done this race in the past, and they’ve all said that this bike? Is a b*tch. Jared and I drove the course the day before, which I didn’t think I needed to do, but it helped ease my nerves. Interestingly, though, many of the friends who were there racing with me did the same thing, but felt more freaked out after the drive. The saying “to each his own” is rarely more true than it is in a sport like long-course triathlon, that’s for sure.

My legs felt good starting out on the bike, but I knew I had a few hours to go before it was over, so I didn’t allow myself to get too comfortable. To add insult to potential injury, we hit a wicked headwind early on in the course. I mean, it’s rough when you hit that when you’re going uphill. But, when you’re going downhill and you still have to pedal in order to avoid slowing down? You know you’ve got a little wind in your hair.

However, aside from a slight self-inflicted hydration incident (pro tip: When you take the outer wrap off your handy sport Gatorade bottles, make sure they’re not also sealed on the inside), the ride was fantastic. Yes, the climbs were tough, but no more than I expected. And the downhills were downright fun — I kept telling myself to remember those moments, because I’m not sure there’s a way to feel more like flying than riding a bike down a hill in the middle of a forest.

During most Olympic (or longer-distance) triathlons I’ve done, I’ve had at least a moment or two on the bike where I’ve thought, “Okay, just finish this and you never have to do it again.” I kept waiting for that moment to happen, and it just … didn’t. In fact, as I rolled into the dismount area at transition three hours and 18 minutes later, I said to the volunteers, “That was AWESOME! And I did NOT expect to be saying that at this point.” 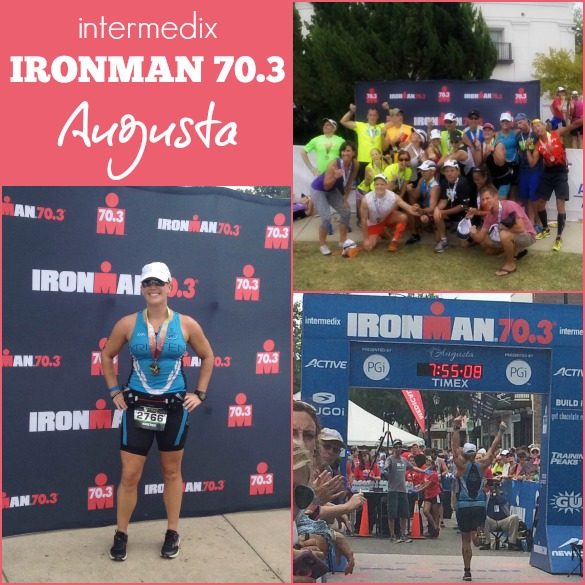 So, other people were scared of the swim (because people are always scared of the swim), and a lot were concerned about the bike (because of the reputation). The run, by all accounts, is ideal — super duper flat and extremely spectator-friendly.

But this was the part that had me terrified. My history with the half marathon is spotty, to say the least. I set some conservative goals (like, umm, try not to walk more than half of it), did the training that Coach Patrick put together for me (which included splitting my long runs into two parts throughout the day to save some stress on my knees), but … man. I just didn’t know how it would go.

The first mile surprised me — my legs felt almost fresh, and being among a crowd of people, including several people I knew, was invigorating. I checked my watch at the mile mark and realized I needed to slow it down a bit. After that, I focused on heart rate and how I felt rather than my pace. I made new friends on the course and chatted with the pals I’d trained with (hey hey, RMC peeps!) as we crossed paths, and before I knew it, I was a couple of miles in and spotted my biggest fan, Jared, which made me grin like an idiot … and get all choked up and emotional (yes, again). I got it under control, though, and kept up my three minutes of running, one minute of walking, and the first of the two loops was over before I knew it.

The second lap continued to feel strangely okay. As with the bike, I expected misery to set in, but it never did. The course was incredibly well supported with water, sports drink, Gu, ice, sponges and more, and I took full advantage of what they were offering. When I got to the final 1.5 miles, I picked up the pace a bit, and, when I hit the last stretch and had the finisher’s chute in sight, I took off, threw my hands in the air, and cried, “YES!!!” as I sprinted through the finish. 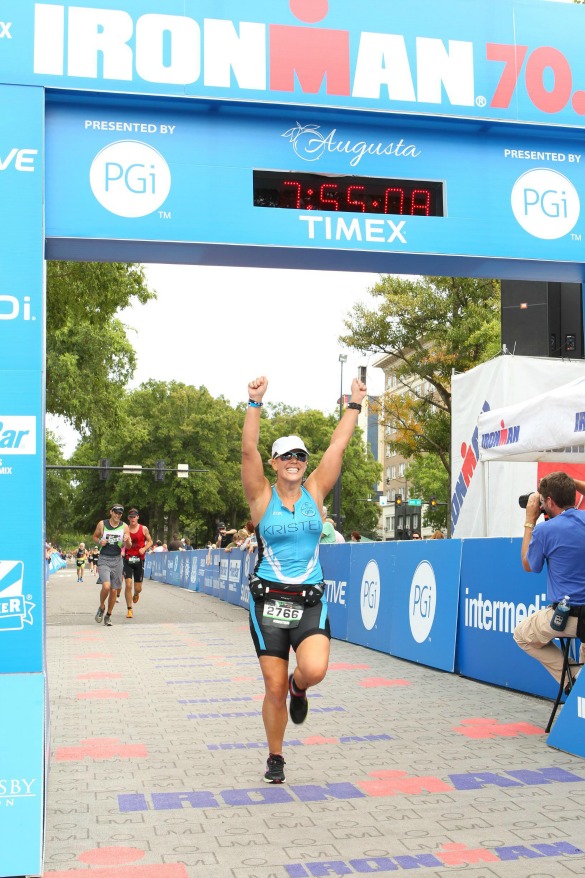 And then I full-on Oksana Baiul-ed it, going from an enormous smile to holding back racking sobs from the huge amount of emotion I’d swallowed for six hours and 25 minutes. I accepted my medal and finisher’s hat, as well as a bottle of water — I think the woman who gave me that might’ve hugged me, but it’s all a little fuzzy now — and wandered into the finisher’s area where I joined up with a bunch of my training buddies. There were hugs and high fives all around, and, when I finally found Jared, some big, sweaty kisses.

This race exceeded all my expectations in about a thousand different ways. I was thrilled with how well it was run, and I was beyond pleased with both how I did on all three legs and how I felt while doing it. I did the work on the front end, trusted my training, and it all clicked in a way that I can’t say I’ve ever experienced before. To call this an amazing experience would be a disservice.

And to say I’ll never do it again would probably be a lie. (But I maintain that the full distance is not for me, for those of you who are getting ready to ask — you know who you are.)

Have you ever done a race or an event that really, truly scared you? Something you honestly didn’t know you could do until you did it? Let’s hear it! —Kristen

Song credits for video: Pilots of Stone by audionautix.com and Pomade