I’m officially able to spill the beans. Mark and I are expecting our first kid next April!!!

I swear Erin, Jenn and I had the best text chat when the three of us were pregnant at the same time. If I didn’t know any better, I’d ask Propel what they put in that water they sent us to try! Pregnant Peeps Populate, Big Belly Bunch and Preggo Power Posse names were thrown out and for the weeks up until Erin delivered our newest FBG, we were an awesome posse indeed.

I have to say being pregnant and having friends who are pregnant with you is a blessing and then some! I’m a baby whisperer. I’ve been around kids my whole life. I love them. I adore them. I get them, but I have no experience whatsoever with pregnancy. My mom had easy pregnancies so I never had the inside track on the mysteries of pregnancy. When I first found out I was pregnant, I didn’t even think I was. I had always assumed there would be physical and immediate changes, such as breast soreness and immediate Hollywood-like runs to the bathroom followed by that “I’m pregnant” aha moment near the toilet, but I felt great and totally normal (despite crazy oily skin). Because of my symptom-free start, I naively assumed pregnancy was going to be easy for me. I was eating raw vegetables and every other food that I’d heard women usually can’t touch. Pregnancy assumptions are cute. Aren’t they?

Now I am a quintessential seasick crocodile. (It hasn’t been pretty.) I long for the energy I once possessed. I feel lucky I was still well enough to attend the IDEA World Conference and made it through Douglas’ workout, but even that was a hilarious pregnancy moment for the books … 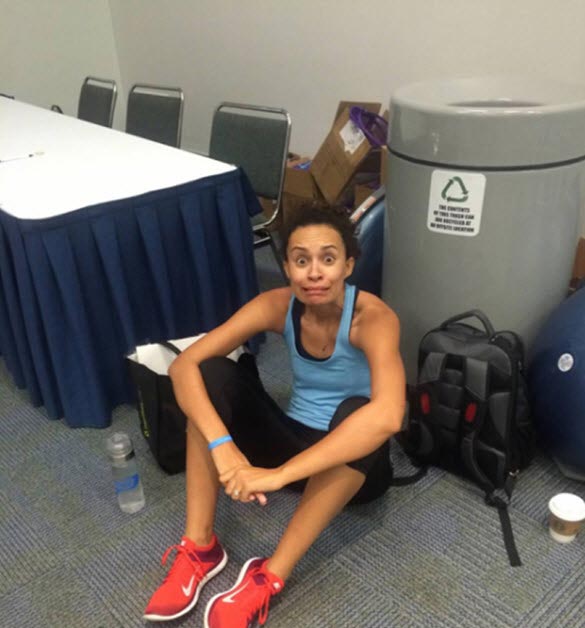 Me, huddled up and scared, before the workout.

I was doing the workout, trying my best to beast it out, but it was harder to catch my breath. I was struggling more than usual and could feel the difference, so I pulled Douglas aside and told him discreetly that while I appreciated all of the focusing on me and how well I did the moves, that I was in my first trimester and had to modify and shift a bit. He didn’t hear the first trimester part, which I figured out later when he was giving out awards to outstanding athletes.

That’s when it happened … He said something along the lines of, “This woman impressed me with her intensity and then she told me she was pregnant …”

I looked at my husband with wide eyes and started praying under my breath for another pregnant woman in the group, but then he called out my name and I found myself being congratulated as I walked to get my medal. I had been outed at five weeks.

I accepted that medal with pride … in front of a whole lot of strangers, scared out of my mind, but then I had to laugh. Only an FBG could get outed at an awesomely huge group class of athletes. It was one of my favorite pregnancy moments. Okay, it was the only one thus far. Not even three days later the great sickness came, and I’ve been a ball of hormones ever since. I thought I’d be active and bouncy. Instead I sleep all the time (I’m talking three naps a day) and have suffered from dysgeusia; what I lovingly like to call “sucking-on-a-penny taste.” No foods have sounded good. I can eat one food maybe twice and then I don’t want it again. So while most women eat to manage their nausea, I haven’t been able to find a trick that stops the rocking.

That’s when best friends who are also pregnant come in handy. Jenn has been a beacon of light. She keeps me focused and gives me all of the necessary heads up. She sent me treats to help manage the nausea and the most beautiful card of encouragement. Between her, my husband and his insane amounts of kindness and another pal Glenda giving me Filipino crackers and ginger chews, I’ve managed to sit here and write to you all like a normal human being. I can’t guarantee I would have made it through unscathed without them.

So how is it that a once very active gal can go from gym rat to couch potato? That’s actually been easier to handle than the sickness. I’m thankful I had solid strength and endurance built up before I got pregnant. I know I still have some juice in there that I’ll be able to call upon soon enough. Plus, I’ve been too tired to worry about anything at all really. When I say I sleep a lot, I’m not feeding you a slice of hyperbole pie. We got out a tiny bit to throw people off our scent, but even on our anniversary trip all we both did was sleep.

I’ve rested well because I made peace with the fact that it means this kid in me is super magical and is really using every resource I have to give in order to grow and be healthy. Now, I do have to say it’s easier but not easy by any means. I still cursed and cried last week when I really, really wanted this specific dish (so my husband went out and got it because “Oh, my gosh! She actually wants to eat something!”) only to have to immediately run to the bathroom (Hollywood-like) and throw it up. Once back at the table, I then had to run to the bathroom again just upon seeing it still on the table. Needless to say, I wasn’t amused that I finally got my Hollywood moment.

But, like my official outing, I can laugh about this, too. I’m gathering from Jenn that you can laugh about it all rather easily once you’re out of the storm. I like to think being an FBG has prepared us for that, really.

At the end of the day, I’m filled with gratitude that I’m having a child with the most amazing guy I know; that we’re adding to our family and “finally” — as she’d say — giving my hilariously anxious mother grandbabies. I’m also thanking my lucky stars that the universe was kind enough to allow Jenn and I to go through this together. I can’t wait to belly bump that woman. We’ve been high-fivers since eight grade. It’s a bit poetic that we now do this together, don’t ya think?

The Preggo Power Posse is in full effect. —Tish