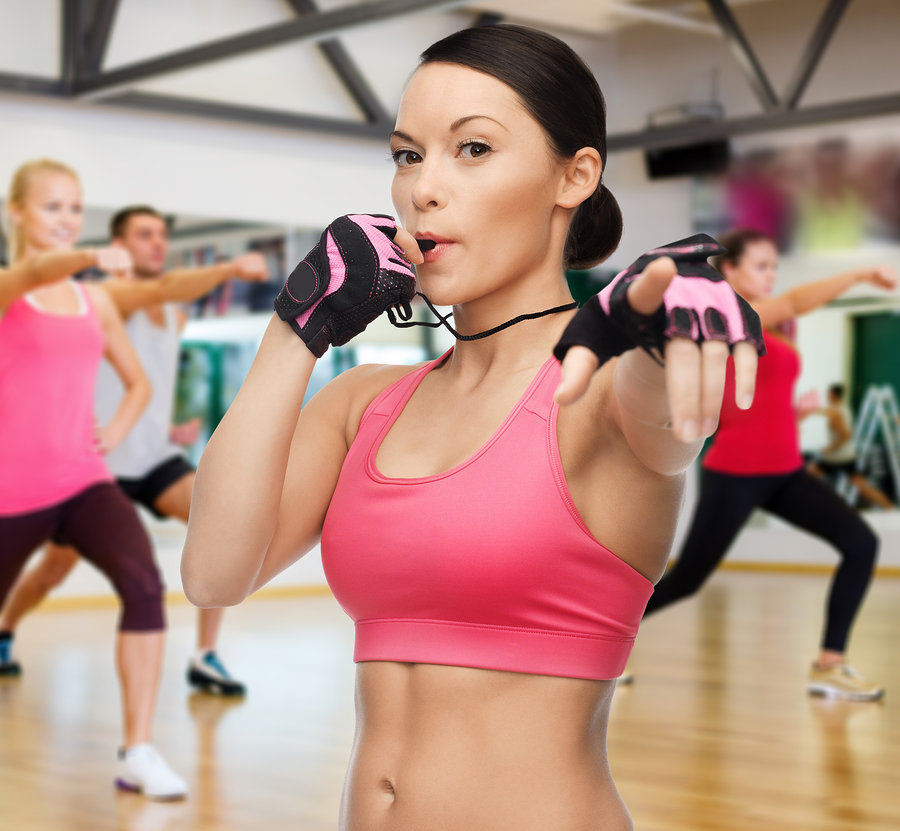 I remember the first Zumba class I ever witnessed. My gym has a large instruction room with a window that lets the whole gym look inside, and I recall feeling the thumping beat through my sneakers while watching a large group of women (and a few men) — all ages, sizes, colors and ability levels — go through some intricate choreography consisting of shimmying shoulders, sassy hips, high fives and lots of “Woots!”

I immediately knew I had to try it.

The friend I was with knew just as quickly that she would never set foot in the class.

Zumba’s appeal, to me, is that it’s a way to burn quite a few calories while having a really good time. You’re not supposed to suffer in Zumba. You’re not supposed to push yourself to the point of  groaning with pain and discomfort. You’re just supposed to dance — and if you dance hard enough, you’ll get in a workout that’s just as tough as some of those workouts that pride themselves on pushing the limits of what you can endure.

Of course, if you hate to dance and would rather follow a lemming off a cliff than follow an instructor’s choreography, I suppose this could push those limits for you.

Like pretty much every type of workout you’ll ever try, Zumba is not for everyone. But, I do feel strongly that, if you’ve ever found yourself tapping your toes to a beat, you ought to at least give it a try. What do you have to lose?

Zumba: What to Know Before You Go

1. There’s a wide variety of Zumba classes, so you can pick and choose one that appeals most to you. Although it started out with mostly Latin or Latin-inspired music, you can now find classes that incorporate all kinds of danceable tunes. My favorite classes usually mix in some hip hop. And it’s not just the music that’s varied — there’s aqua Zumba, Zumba for kids, Zumba for seniors, Zumba that incorporates strength work … the list goes on.

2. Some people will know the routines cold. People often become very attached to a specific class and teacher, so they know every routine as well as a Rockette. There might even be regulars who the instructor calls out by name to join her in leading certain routines. Don’t let this intimidate you! Remember, with a few classes under your belt, that could be you, too … if you want.

3. You’ll miss some steps … and you won’t be the only one. I’ve never been to a class where I’m the only one unfamiliar with the choreography. And, let’s be honest — sometimes, someone might be completely familiar with it, but just a little shaky with the execution. But you know what? That’s completely fine! The whole point is to go in, have a good time, and work up a sweat. You don’t have to be hitting all your marks on the beat to do that!

4. You’ll work hard. The first class with a new instructor is always the toughest for me, not just mentally, but physically. When you don’t remember what moves are coming next, you’re constantly rearranging your body to get in the right position, and that uses a whole slew of muscles that rarely see the light of day. Even if you don’t feel like you’ve put in an enormous effort, chances are you’ll at least feel it a little bit the next day.

5. All kinds of people will show up. You’ll see ladies decked out in crop tops with Zumba logos and guys (yes, really!) who came straight from the weight room. Seniors in high school might find themselves next to seniors … in life. The diversity is part of what makes Zumba so great!

6. The cuing might take some getting used to. If you’re used to taking a class like step aerobics where the instructor calls out every move, you’ll probably find Zumba to be a bit different. Routines are based on the music rather than a set count, so you’ll do the same moves every time the chorus plays, with other moves taking place the rest of the song. And the instructor might or might not call things out — she might signal or clap instead, so, as you’re learning the moves, you’ll need to keep your eye on her as much as possible. But, remember No. 3 — if you miss a step, it seriously doesn’t matter.

7. People will “woot!” It’s okay if you don’t want to — nobody is going to force you to hoot or holler or clap or anything. But know that it’s going to happen around you, so if you want to join in, go for it!

8. You’ll find yourself grinning like a fool. The fun of these classes is infectious, and I have never left a class without smiling so big it hurt. People generally go in ready to have a good time and leave their self consciousness at the door, making it a safe space to really let loose in a way that feels good to you.

Have you ever tried Zumba? Did you love it? Did I miss anything  you’d point out to a newbie? —Kristen