When you become immersed in the world of your exercise of choice, you tend to absorb the language. But when you’re just dipping your toe in the water of that world, that same language can be intimidating if you don’t have someone you’re comfortable asking for definitions.

Happily, we’re here to help you out with just that, starting with triathlon (but don’t worry — we’ve got CrossFit, yoga and more on the way in our WTF Does That Mean series!). To be clear, this isn’t meant to be a fully exhaustive list; think of it as more of a primer. Once you’ve got this lingo down, much of the rest will make sense with context. (And if not, you’ll sound like you know what you’re talking about even when you do need to ask for a definition!) 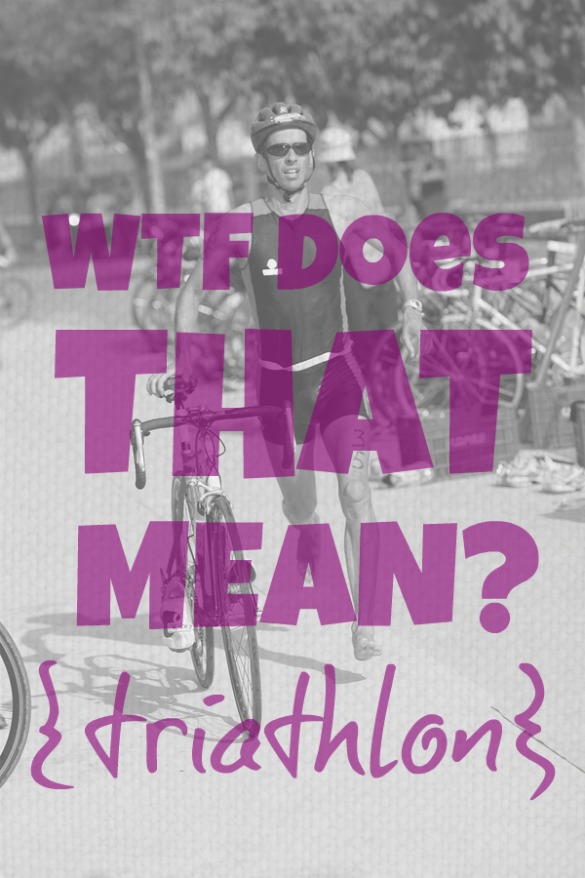 Aero: Aero bars are the bars you see on bikes that allow riders to lean forward and rest on their forearms. You’ll hear people refer to “going aero,” meaning they’re getting into that position to be more aerodynamic.

Athena: A special category outside of age group — women 165 pounds and over, regardless of age, are allowed to enter this category although they also have the option or competing in their age group.

Bonk: Often called “hitting the wall,” bonking refers to the moment when you’ve used up all your fuel and are completely exhausted. Glycogen stores are depleted, and there’s literally nothing left in the tank. You know how you often see triathletes downing gels and energy chews during a race? It’s not because they love the taste — it’s to avoid the dreaded bonk.

Brick: Any of the two disciplines practiced back to back in training. Most often you’ll see a bike-to-run brick, but a brick can be any combination of swim, bike and run with no break in between.

Cadence/RPM: This refers to the revolutions per minute in both cycling and running.

Chamois cream or butter: At the risk of getting really personal here, this is the stuff you rub onto your … uhhh … bits before long bike rides. It’s a non-greasy lotion that prevents chaffing and saddle sores, and some of them even have some numbing ingredients to increase your comfort level. Not everyone uses it, but those of us who do swear by it.

Clydesdale: The male equivalent of Athena — men must be 220 pounds or more to qualify for this group.

DNF (also DNR and DNS): Did Not Finish (meaning you started the race but dropped out), Did Not Race and Did Not Start.

Drafting: The act of following another athlete closely, which greatly reduces the effort you need to put forth (by, like, 20 percent). It’s usually illegal in the cycling portion of triathlon, but you can still benefit from drafting in the swim, where it is not illegal. Also, drafting is often practiced in group bike rides during training.

Roadie: Road bike (as opposed to a tri bike).

Split: The amount of time spent on each segment of a race. You can also have mile splits.

Sprint: A short distance triathlon, typically (but not always) close to a 400m swim, 15 mile bike and 5k run. There’s also a Super Sprint distance that’s even shorter, but harder to find.

Taper: The period of time leading up to a race, generally a week or two, when your training ramps down and your body rests up for race day.

Transition: The segment of a race between the swim and the bike (AKA T1), and then between the bike and the run (T2). Athletes come into a transition area where they have a dedicated spot for their bikes and belongings. There’s also a transition run (or t-run) used in training, which is a short run (a mile or two at most) immediately following a bike workout.

Tri Bike: A bike specifically designed for triathlon, a tri bike puts the rider in the aerodynamic position with aero bars and a very light weight. It should be noted that tri bikes are not always welcome on group training rides because drafting in the aero position is not as safe as riding in a traditional position.

Wave: Races start in one of two ways: A mass start, which means everybody gets into the water at the same time, or a wave start, meaning race participants are sent off in groups, usually a couple of minutes apart.

Are there any confusing tri terms you’ve heard that didn’t make the list? Let us know in the comments! —Kristen