Kate from our Take a Hike With Kate series is back today with a training update on the Phoenix Summit Challenge! Kate is a writer and PR and marketing consultant from Phoenix. She’s a runner, swimmer and tri-athlete in training.

So, you might remember that I’ve been training for the Phoenix Summit Challenge, where I will hike 17.94 miles with a 3,800-feet elevation gain in less than eight hours and drive between four summits in the Valley of the Sun. It’s time for an update and, with guilt, I admit I only begin to train mildly in early October. I planned on kicking it up the final month of training. Then, I was in a car accident that left me with out any desire to exercise or do more than walk the dog for about two weeks. I managed to compete in one 5K. Then, my partner (in hiking and driving) for the race bailed. My husband offered hesitantly to do it with me, but the race has been sold out since the day registration opened.

Suddenly, something I was really excited about turned into something that seemed like a chore to even begin.

Remember that this is supposed to be a challenge, but you know … fun. An event where you relish the journey and the beauty of nature. An event where you finish and enjoy the post-event party. The option of doing this alone after minimal training seemed, at this point, the opposite of fun. Stupid even.

“Stupid” is one of those words I often throw out when I’m in over my head and might possibly risk injury because I just had to do something. I’ve muttered it trying to not fall off a steep slope after an eight-hour hike. I’ve thought it out loud when climbing a 30-foot cliff only to jump off it into the water below. I’ve thought it when deciding to train in 95-degree heat. Alas, it may be stupid, but I’m signed up, committed and I promise to attempt this feat. 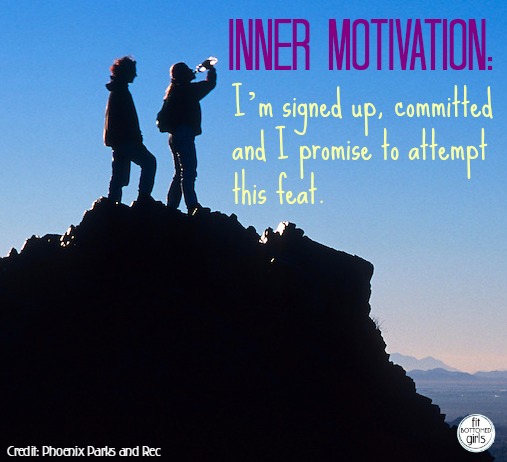 I still have about three weeks to train. I’ll be participating in another 5K and although I’ll be traveling, I’ll be hiking along the way. Come November 15 it may not cut it — but I’m surrounded by many competitors who remind me to never quit. A local gentleman in my circle here in Phoenix became the first man to do a half-Ironman while undergoing chemotherapy. Then, he did another half-Ironman on his own, two days later on a day when he received chemo treatments. He biked himself to the chemo appointment, ya’ll.

So when I’m in massive pain on the third summit of this challenge, and by myself, I’ll just remind myself I’m not getting chemo and can probably finish this thing. I look forward to sharing those photos.

Inspired to get your hike on, too, and commit to a big ol’ goal no matter what life throws at you? Check out these hiking tips. (They’re certainly helping me to get excited and recommit!) —Kate