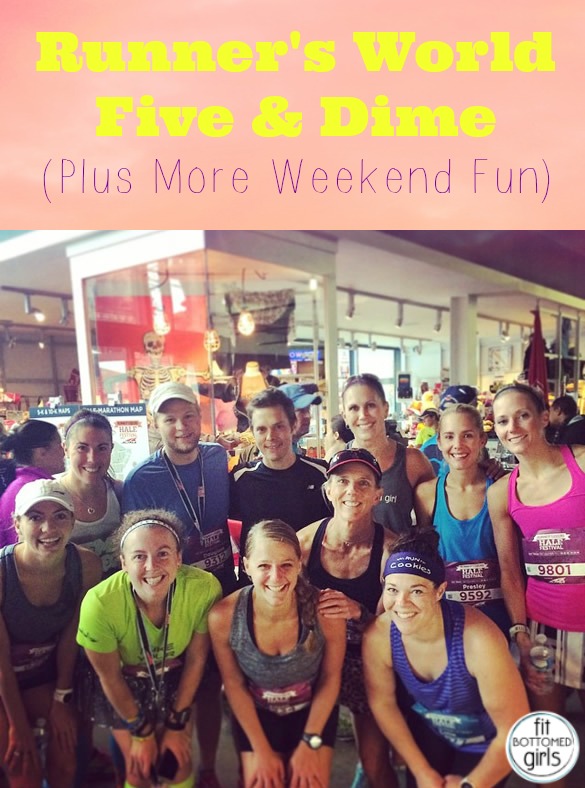 When Runner’s World invited me out to their Runner’s World Half & Festival (and yes, they paid for my entry and accommodations and everything, but I was not required to write about it unless I wanted to!), I was pumped. In addition to the special events planned for my fellow bloggers and me, the weekend festival included a 5k and 10k on Saturday, as well as a half marathon on Sunday. I opted for the Five & Dime (5k and 10k), choosing not to do the half marathon since I knew it would only be three weeks after Ironman 70.3 Augusta and I didn’t know how well my legs would hold up. Seems like a pretty legit reason, right?

Upon arriving, I quickly learned that, in the company I was keeping? That was not much of an excuse. The weekend before the festival, Doug from Rock Creek Runner had just completed a 50k; my roommate, Ali, from Ali on the Run, had pushed through a tough marathon; and Katie of Ms Fit Runner had qualified for the Olympic trials with a 2:41 marathon on Sunday; not to mention several other runners who’d finished full or half marathons that weekend.

And they were pretty much all doing the Hat Trick (all three races). No biggie, right? Oof.

Wondering who all was there? Here’s the full list:

It would’ve been easy to be completely intimidated right from the start … if the bloggers and the Runner’s World staff we met during our dinner (more about my weekend eats here!) and tour of Runner’s World HQ hadn’t been so down to earth. (Sound familiar?) I allowed myself to get a little swept away when I popped into Chief Running Officer (yep, official title) Bart Yasso’s office or Editor in Chief David Willey’s office as they led us on our tour, but truthfully, I mostly felt myself getting seriously inspired — and that was only the beginning. 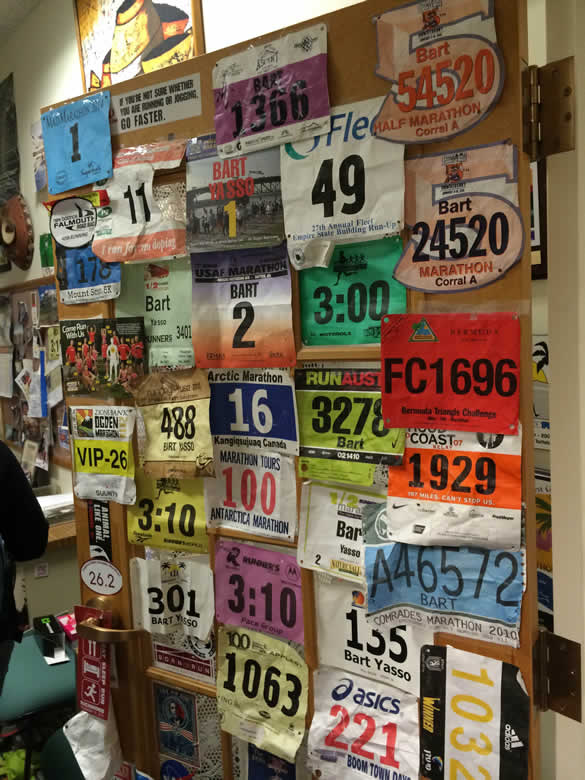 The following morning started off with a serious bang — an “Amazing Shakeout Race” that started out with our teams (Go Team Wombat!) dressing up in some Running Skirts gear and then running (faster than my usual pace, I might add — I was glad I thought to bring my inhaler along) all around the beautiful city of Bethlehem collecting clues. 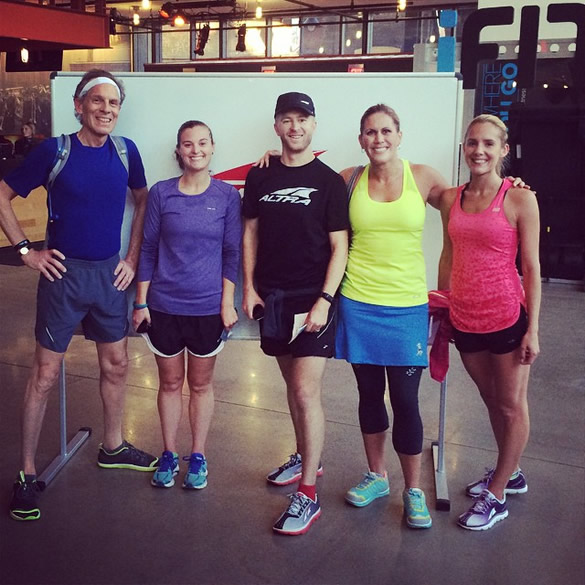 Way to go Team Wombat! Left to right: Dick from Cheaper Better Slower, Jamie from Couch to Ironwoman, Brian from Altra, yours truly, and Presley from Run Pretty

Then, we jumped straight into presentations. And yeah, I know, you hear “presentations” first thing in the morning and you might catch yourself yawning, but you guys? That was so not the case.

Our first speaker was Bud Coates, author of Running on Air. He explained his simple but revolutionary breathing technique designed to help all kinds of runners improve their performance and avoid injury. Considering the issues I have with, you know, breathing in general, not to mention injuries and my not-so-speedy pace, I was seriously pumped to give it a go.

The pumping up continued with the next presentation by the founders of Altra — I’ve got their Intuition 2.0 shoe, and I have lot to say about it in a later post! — and, man. Brian Beckstead and Golden Harper gave us the scoop on how this zero-drop shoe with a foot-shaped toe box came to be (spoiler: It started out with Golden popping a running shoe in the toaster oven to modify it, which was, apparently, par for the course in his household), and then, Golden gave us a quicky running form clinic that has kind of changed my life. Four words, people: Pop your elbows back. 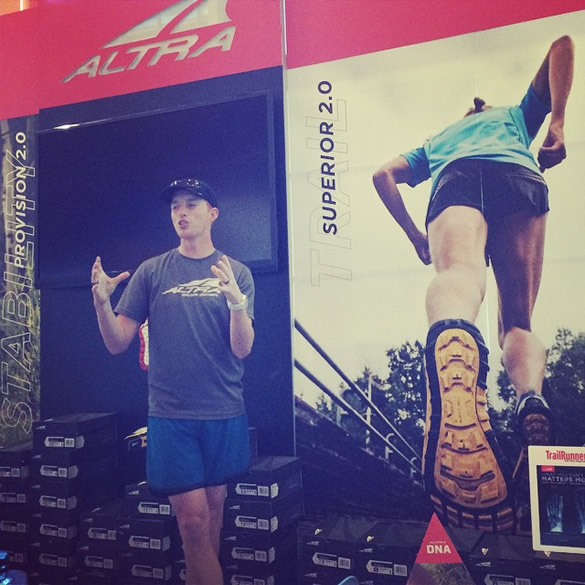 What’s the deal with the zero-drop Altra shoes? I got the scoop on that (and much more) straight from the source: founder Golden Harper.

We also heard about the latest and greatest from iFit. We bloggers had been wearing their iFit Active tracker for a couple of weeks, and I knew I dug it off the bat because of the easy to read screen right on the tracker, but they have so much more to offer than just a straight up activity tracker. Between the tracker and the app and the variety of fitness equipment it works with, we’re talking about some seriously integrated fitness tech — all with a positive aim of helping you achieve your goals.

When it came time to race the next day, I was thrilled to run into Katie from Runs for Cookies at the start line for the 5k. We decided to run together and take it easy, and the hilly, scenic 3.1 miles just flew by (although, not as fast as it did for Lauren from The Foodie Runner, who just went ahead and won the race — way to go, girl!). We agreed to pair up for the 10k an hour later as well, and while we didn’t set any records with our pace, we managed to fit an enormous amount of conversation into those 6.2 miles. Plus, we finished with huge smiles, which, in my book, counts for a whole heckuva lot. 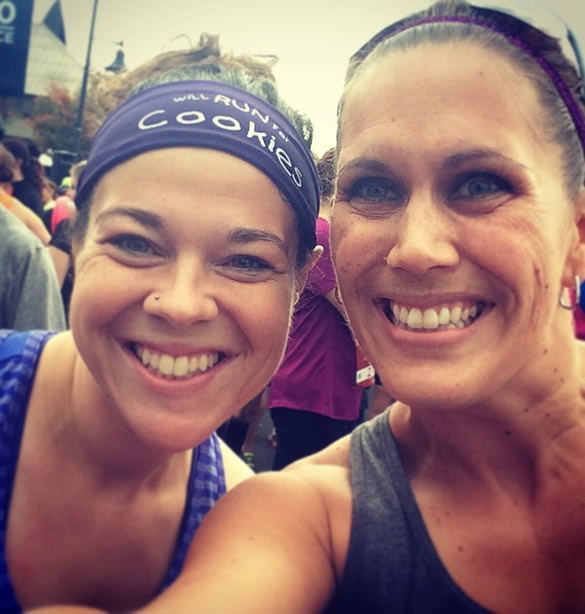 Of course I had to grab a quick start line selfie with Katie from Runs for Cookies … because we just wouldn’t have time in the following 9.3 miles we were running together, right?

The rest of the day was spent checking out various seminars (I hit up Mark Remy of Remy’s World and Bart Yasso), grabbing a drink at the gorgeous Hotel Bethlehem bar, hitting the comedy show (if you have a chance to see Liz Miele perform, go. She’s hilarious and talks about running and dating and cats.) 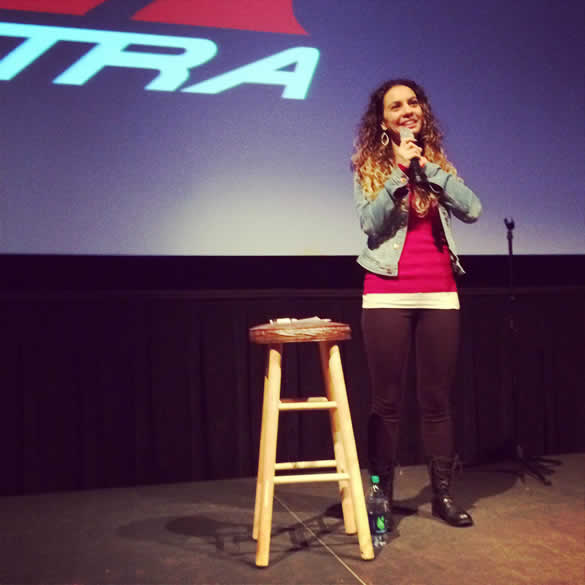 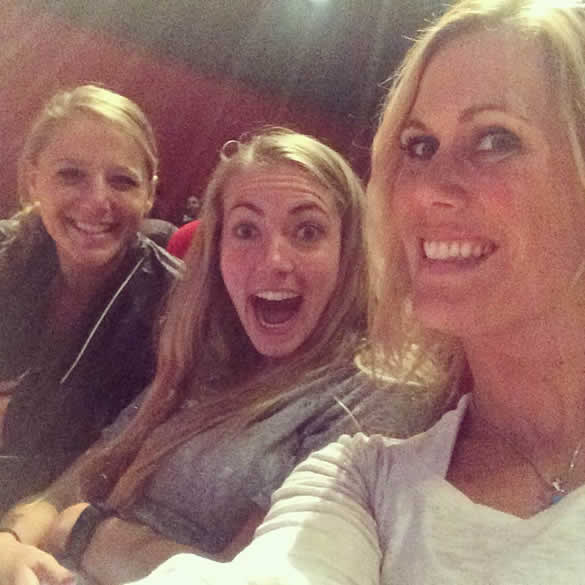 Woot! Front row for the comedy show! And not *entirely* because we were almost late …

While I didn’t race the half marathon the next day, I made my way down to the finish line and camped out to cheer on my new friends, and you know what? Spectating on a gorgeous morning is something special on its own. I knew I’d made the right call for my legs on that particular weekend, but I found myself thinking that a Hat Trick in the next year or so might be a fun, new challenge. 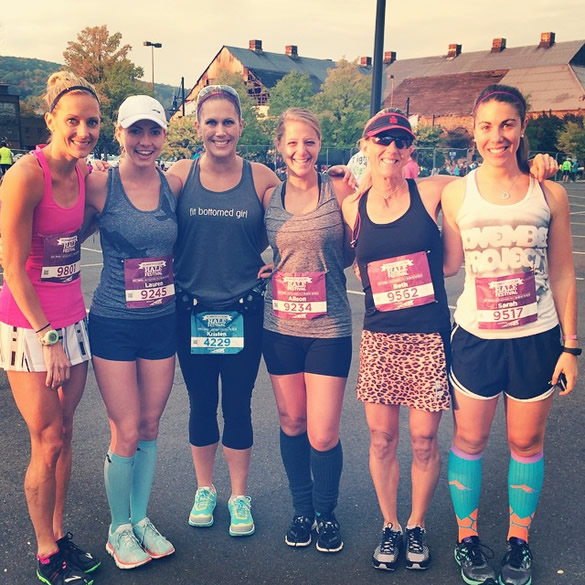 I totally lucked out with the group of bloggers that attended this trip. I laughed a LOT with these girls. Left to right, Katie (Ms Fit Runner), Lauren (The Foodie Runner), me, Ali (Ali on the Run), Beth (Shut Up + Run) — watch out, because I’m SO joining her for a tri some day, and Sarah (Picky Runner)

Now, this weekend was full of surprises for me, but the biggest surprise of all was that I came home, like, beyond excited to run. I really thought that, after Augusta (and, fine, after my next tri this coming weekend — I’m hitting the TriRock Clearwater Olympic distance yet again), I would put running on the back burner. But I don’t think that’s going to be the case.

After a weekend of talking to numerous ultrarunners and record breakers and, well, people who just love to run, I’ve found a whole new passion for running. I came home and hit the trails for a run the next day, and the following day? I took over a minute off my mile pace for my normal Tuesday night group run. That’s a minute on each mile, you guys. Whether it was the new-found enthusiasm or the change to my running form, I can’t tell you, but whatever it was, clearly, it worked.

But I’m also not saying I won’t.

Have you ever attended a race or event that rekindled your love of running (or any other sport)? Tell me all about it! —Kristen