I’ve said it before, and I’m quite certain I’ll mention it again: I struggle with my thighs rubbing. I used to get really embarrassed about it (I mean, people do call it chub rub), and then I realized two things. First, this is an issue for me even when I’m at my leanest. Like, here? Chafing was still an issue.

Also, it’s an issue for a lot of people, but because it tends to make people feel embarrassed, it’s generally not discussed all that often. I think that could stand to change.

For working out, the solution is pretty simple — I almost always wear capris or tight shorts that are long enough to cover the area that rubs. However, this isn’t only a problem during exercise — chafing can also occur when I’m just walking around, and since I like wearing dresses, that can be an issue. Fortunately, I’ve got a couple of really effective tools in my arsenal. 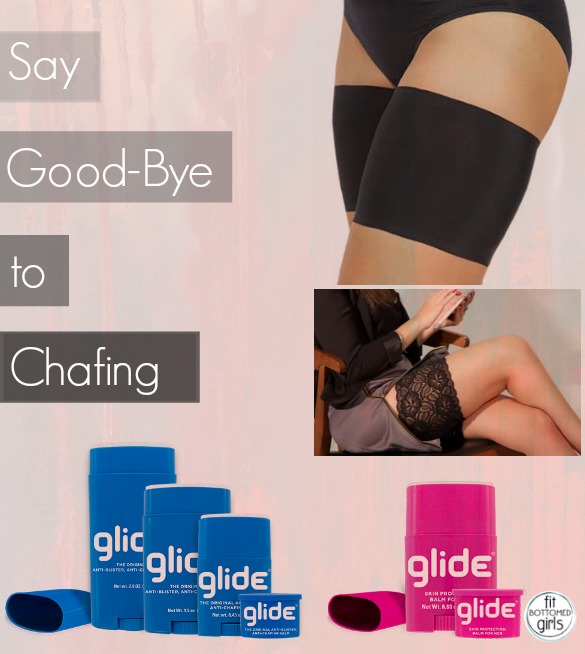 Many endurance athletes use Body Glide in at least a couple of places for long training runs or races, and for good reason. It comes in a deodorant-like stick (although it’s also available in a squeezable tube) and can be rubbed just about anywhere to alleviate chafing — both of the skin-on-skin and the fabric-on-skin variety. Perhaps most important (well, next to the fact that it works, that is) is the fact that it’s non-greasy and won’t stain your clothes or rub off anywhere you didn’t mean to put it.

Thighs, obviously, are a great place for it, but it’s also useful for spots where your sports bra or shirt rub, areas on your feet prone to blisters, up on your neck to avoid a horrible wetsuit rash after a long swim … you name it. I tend to just use the regular, original Body Glide for everything, but they do make specific formulas for feet, cycling and more. They even have a women-specific formula with extra moisturizing goodness.

It’s long-lasting, but it’s not, like, permanent, so if you’re participating in a long race (or just walking around in a skirt for hours on end on a hot, sticky day), it can wear off. Happily, in addition to offering a bunch of formulas, Body Glide also comes in different sizes, so it’s not unusual for me to toss a tiny stick into my race belt or purse, just to be safe.

Bandelettes are one of my favorite new finds. They’re 5.5 to 6-inch tall bands for your thighs and look kind of like the lacy tops of thigh-high stockings. They utilize non-slip silicone on the insides to keep them perfectly in place, and are available in a variety of sizes and colors because, the fact is, people of all sizes face thigh rubbing issues.

They’re totally comfortable — I wore them to a party last weekend and totally forgot I was wearing them — and extremely easy to use. I mean, I’m talking dummy-proof here. And, aside from being a little unusual, they’re actually quite pretty (although I don’t think I’ll be wearing them under anything so short that they actually show — just not really my style).

Bandelettes also offers a unisex sport version to be worn, well, for sports, but under short shorts. I haven’t tried these out yet, to be honest, but considering how well the lace version stayed in place throughout a night of walking, dancing and climbing stairs, I’m betting they work pretty well. And hey, if that’s what gets you into a pair of shorts you’ve been shunning, that’s a pretty sweet deal, right?

Alright, guys, I’ve been honest, and now it’s your turn — how many of you deal with thigh-chafing issues? And have you tried either of these products to stop the burn? I know for a fact I’m not alone, and I’m tired of people feeling embarrassed about such a common problem! —Kristen