I’ve said it once and I’ll say it again: one of my favorite things to do each year is host Friend Feast, an annual tradition that started as a more traditional “Friendsgiving” and morphed into a full-out four-course meal that Ryan and I make each year with full-out fanciness. Well, as fancy as you can get with our skill level, kitchen and pretty basic serving ware (plastic polar bear plates for the win!).

But, this year, we did take things up a notch. First — and probably the most important thing we did — we tested the recipes ahead of time! An obvious thing to do, I know, but we didn’t do that last year and had a few courses I was disappointed in. This year though, the testing let me fine-tune a few recipes and gave us confidence in everything we were serving. Second, experience always helps. From last year’s Friend Feast, we learned how to better time things and what kind of food worked well for entertaining (read: making two courses a day ahead and the other two courses — one of which was in the slow cooker and not taking up the oven — the day of was key to us really enjoying the whole event and not just rushing around stressed). Third! I roped my friend Jim of KC Beer Scouts into pairing each course with beer. This really added a new dimension of fun — and flavor — to the night. (Even if I was just longingly looking at all the pairings and not drinking them!)

Before the courses began, we set up our liquor bar with a nice array of drinks for the group. 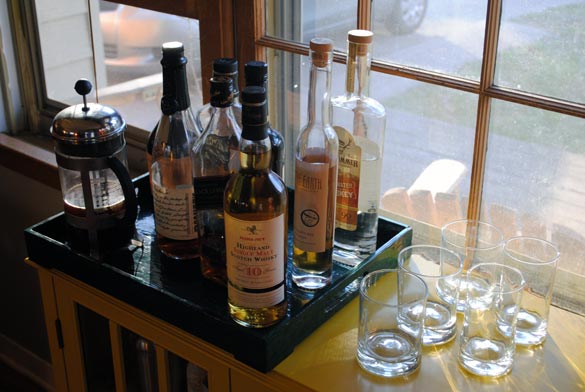 And, we had encouraged our 12 guests to bring an item or two for a group charcuterie plate. And, man, oh, man did they deliver! SO much yummy meat, cheese and olives! 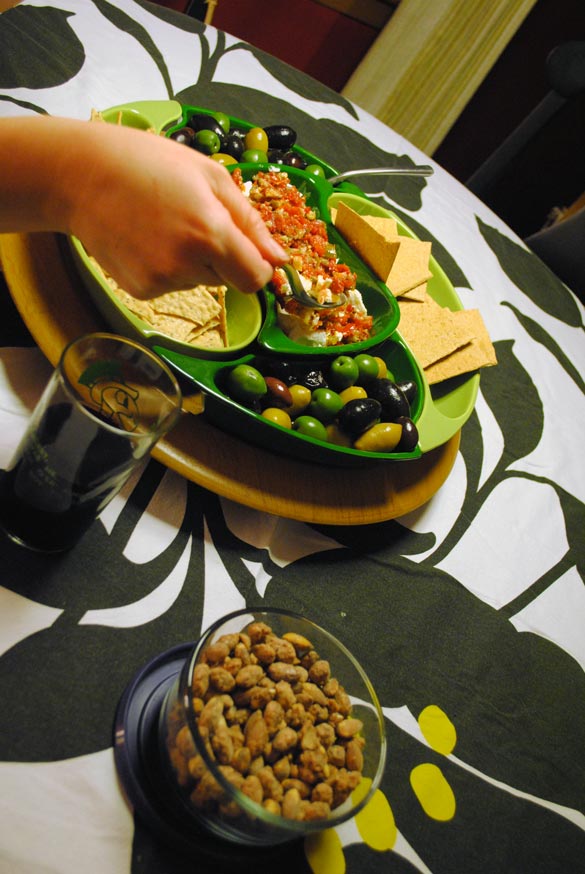 This photo represents about A THIRD of what we had.

We enjoyed that along with a little something special we made from the Nom Nom Paleo cookbook: Devils on Horseback! These warm little sweet-and-savory bites of heaven are basically dried plums, topped with macadamia nut ricotta cheese and a piece of prosciutto that’s been slightly crisped in the broiler, plus a drizzle of balsamic vinegar reduction. Holy moly, they were good. We made 52 of these total, and they were all eaten by the end of the night. 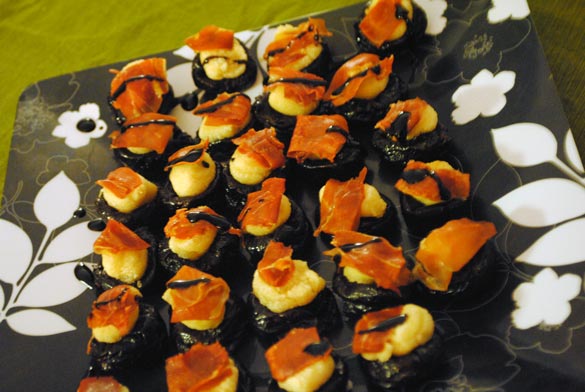 Jim paired the little devils and the rest of the meats, cheeses and olives with this. I heard only good things about how well they went together … 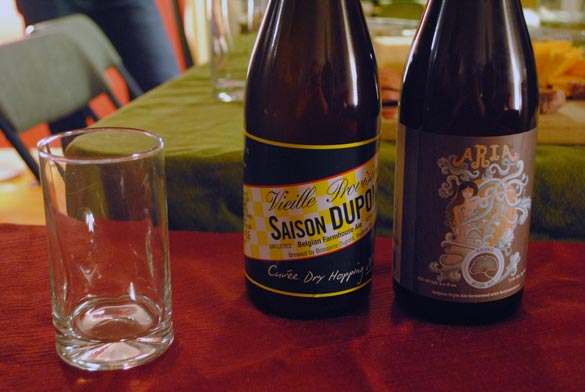 For the first course, we wanted something light but bright, flavorful and seasonal. This soup certainly fit the bill. Also from the Nom Nom Paleo cookbook, this soup is basically cooked and pureed carrots, leeks, apple broth, ginger, spices and coconut milk. 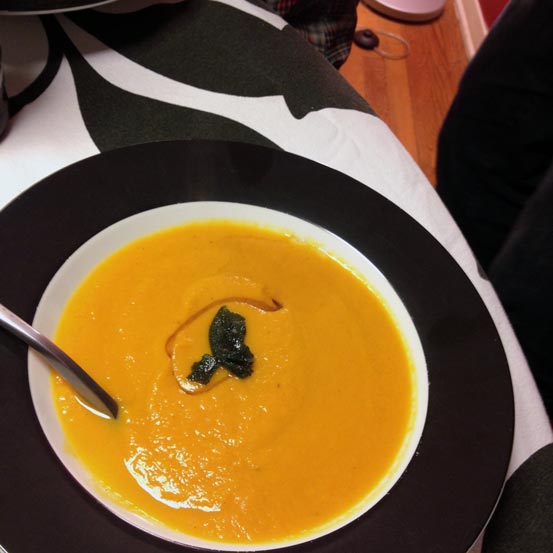 To take things up a notch, we added a drizzle of walnut oil and an olive-oil fried sage leaf. This was paired with Lefthand Brewing’s Sawtooth.

Ryan and I are big Julia Child fans, and he makes her Eggplant and Zucchini Gratin on a lot of weekends. It’s a simple yet time-consuming dish to make, with lots of steps of roasting and assembling, but it’s worth it. Made with lots of tasty veggies (eggplant, zucchini, tomato and squash) that are topped with bread crumbs (gluten-free in this case) and Parmesan cheese, it’s the kind of course that’s hearty and flavorful but doesn’t make you feel too heavy or full. 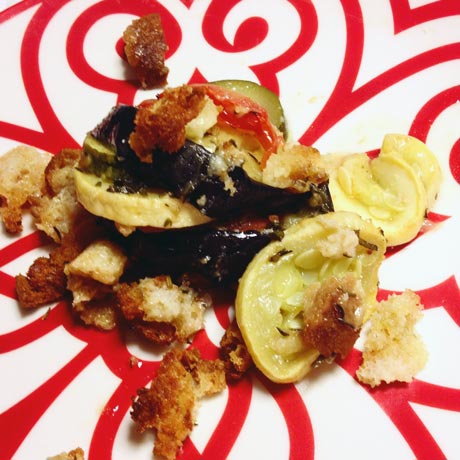 In other words, it made for a great second course. Jim paired it with Urban Chestnut Dorf Dunkel.

I’d had a vision of this dish for months. The short ribs (again, from Nom Nom Paleo!) are smothered in a flavorful puree of coconut aminos, pear, fish sauce, scallions, garlic and broth and cook in a slow cooker for 11 hours. This results in the juiciest, tastiest bites of beef you’ve ever had. Seriously. The flavor and consistency is amazing — and it’s pretty much a breeze to do. (Just had to get up at 6 a.m. to get the timing right!)
I knew the short ribs would be amazing over potatoes of some kind, so I made my grandma’s whipped potatoes, which are basically just peeled russet potatoes boiled and then whipped until smooth and creamy with whole milk, a little olive oil and salt. They’re simple but amazing and one of my favorite foods, ever. We topped the whole thing with a little cilantro for pop and color, and it was my favorite course of the night. 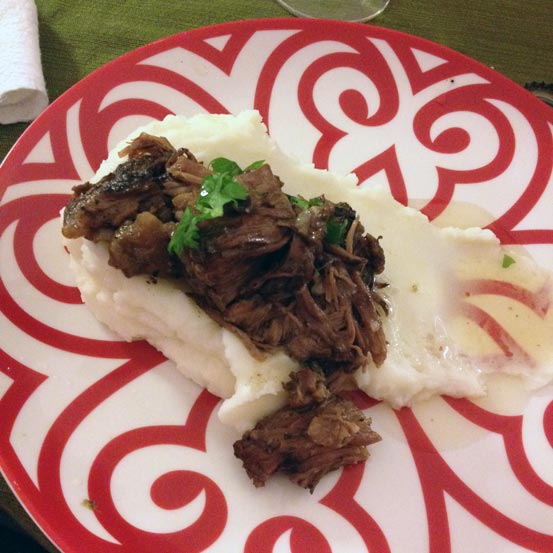 Jim paired this rich course with some bright palate-scrubbing tripels from Westmalle and Unibroue.

Ryan and I had pots de creme when in Seattle, and we’ve both been obsessed with the dessert since. So, naturally, we wanted to make our own version for Friend Feast. And what do you know, Nom Nom Paleo had a recipe for it. Hers has a Mexican twist on it with spices and cinnamon, but we adapted it a bit to just be all dark chocolate, all the time. (I also found from my two attempts with making the recipe that getting good quality full-fat coconut milk was key, and that in order to get a smoother consistency, melting the chocolate and then letting it cool a bit was a better method — for us at least — than finely chopping the chocolate.) I also went ahead and topped them with full on dairy fresh whipped cream that had a little rum in it. Everyone wanted seconds of this one! 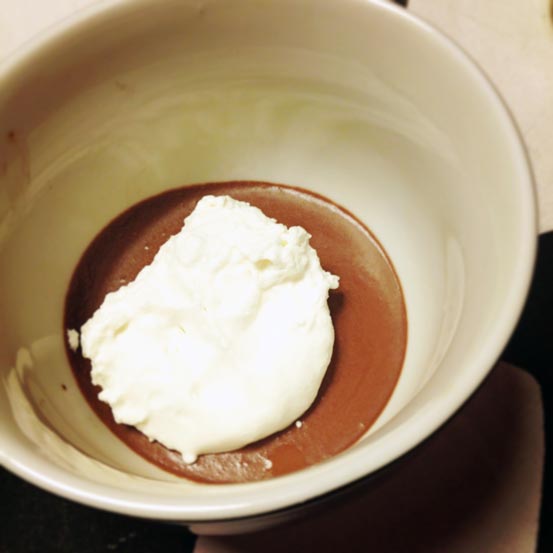 Because dessert and coffee go together like peas and carrots, we served this with a recommend Kenya blend from Second Best Coffee (an amazing slow bar in KC — we told them what we were making for dessert and they recommended the blend!). It was bright and lovely. 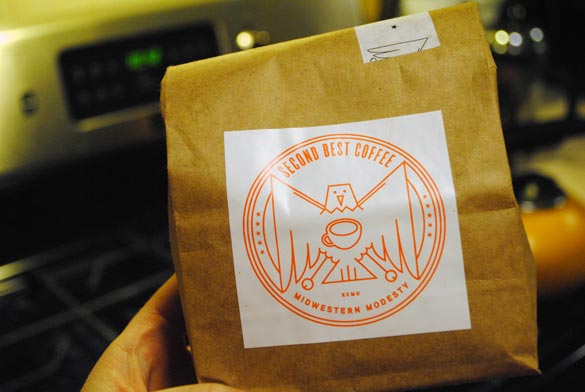 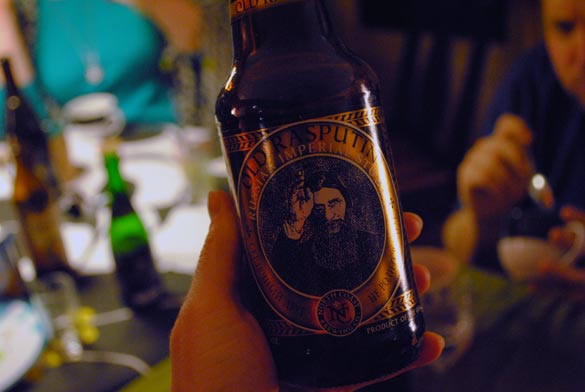 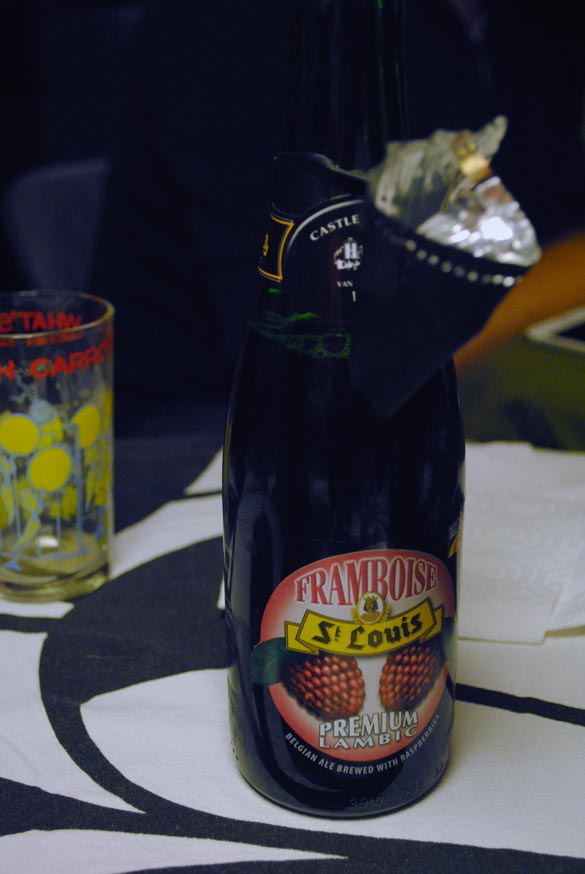 The whole four-course meal was pretty epic, if I do say so myself. The meal lasted a little more than three hours, so even though a lot of the food was rich, no one was overly stuffed. And there may have even been a little room for us all to sit around after and have a cordial or two (don’t worry — I stuck to some of this new Kevita kombucha mixed with a little pomegranate juice) after dessert.
All in all, the whole night went really great! And I definitely feel like Ryan and I improved our cooking chops a bit — I’m already looking forward to Friend Feast 2015 and brainstorming recipes. You can never start too early! Also, a big shout out to Jim for the beer pairing. If you love beer, you MUST read his blog KC Beer Scouts! He and his team of writers cover a lot of Kansas City beer events, but they also do reviews of beer from all over, so it’s a great read no matter where you live.
Which course do you think would be your fave? Like I said, I’m partial to the short ribs because that meat was just so darn tender and fell off the bone. But, it is hard to ever go against dark chocolate! —Jenn