We are thrilled to have Anagha Bharadwaj filling FBG in on why she loves yoga so much! She attended Michigan State University and spent roughly 60 percent of her time in the library, trying to find new research sources for one paper or the other and the other 40 percent working out (or making resolutions thereof), sleeping and watching far too many episodes of Weeds and assorted sitcoms. Once she graduated, she realized that there was nothing she wanted to do so much as write, travel and do yoga. So, she dusted off her old ambitions, enrolled in a Yoga Instructor’s Course with Yoga Bharathi Detroit, and set to writing. 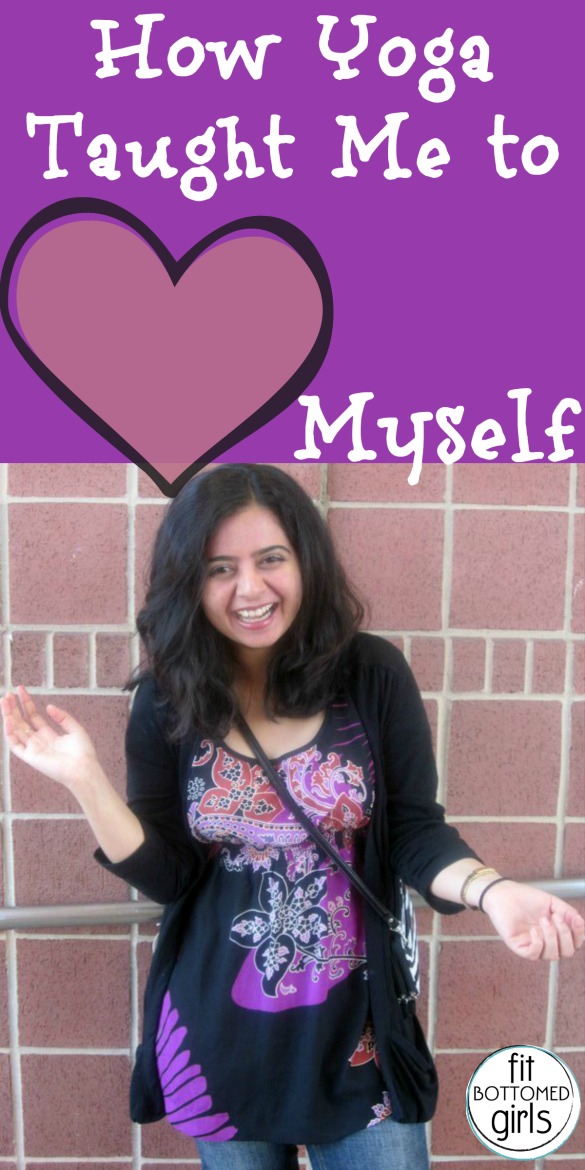 I was that girl who stood at the back of the yoga class. You know the one; comes in right on time, avoids eye contact, and slinks to the back left corner, praying no one will be able to see her. I was incredibly self conscious of myself, my abilities, and most of all, my sweat. Back before I started on my fitness journey, I was seriously unhappy with the way I looked, and covered it up with baggy capris and baggy shirts (I never once wore shorts to the gym, or anywhere else!) And on top of that, I sweat. A lot.

This isn’t the sort of sweat I can hide — I have a friend whose feet sweat more than any other part of her, and I am consistently jealous, because I can’t cover up my sweat with cute shoes. Short of wearing a mask, there’s nothing I can do to cover the rivulets that stream down my face when I work out. Regardless of the intensity of a workout, I am almost always drenched by the end. I look the same at the end of a two-mile run as most people look at the end of marathons and ultras!

I would go to Zumba and Spin and find a spot as far back as possible, dark clothing on to hide the swimming pool of sweat I was about to produce. I probably spent more time wiping my face than I did working out, and when the class ended, I was always the first one out the door. Stick around, find fitness buddies and drink water? No thanks, gotta wash my face!

This continued for a while, until I went to my first hot yoga class. I went with a friend who promised me I would love it, armed with enough towels to soak up the Atlantic. And as I moved from one pose to the other in 105-degree heat, I didn’t have time to worry about other people in the room. I was totally focused inwards, feeling my body as it moved, stretched and yes, sweat. I could feel the physical cooling down of my skin as sweat dripped down my shoulders — I could feel how each of my muscled responded to that coolness.

All of my awareness shifted inwards, to the point where I didn’t care what anyone thought about my body. I was just so happy and pleased to be the person housed within it, the person who had the privilege of feeling every movement so deeply. I could feel myself sweating, could see it dripping onto the mat, and I was so totally aware of how much my body enjoyed that sweat that I couldn’t be embarrassed about it.

As I practiced yoga more and more, I found that I was able to take this body awareness to other parts of my life as well. Suddenly, I didn’t care what people thought of my frizzy hair or my thick thighs — I was aware of these parts of me, and I accepted them fully. Yoga truly helped me change the relationship I had with myself. With my awareness came acceptance and love, and I have never looked back.

Has yoga helped you to love your body, too? —Anagha