When my first child was born, I really wanted to limit screen time. So much so that I would feel guilty if I was breastfeeding while multitasking on my then-BlackBerry (two phones later, I still miss that thing). And I’d tsk-tsk myself when my infant was obsessed with the bright lights of the television. My hesitations stemmed from the American Academy of Pediatrics’ recommendations that kids’ screen time be limited until age 2:

Television and other entertainment media should be avoided for infants and children under age 2. A child’s brain develops rapidly during these first years, and young children learn best by interacting with people, not screens.

I feared that any screen time would turn my babies’ brains to mush. But like all of those things that seem like hard-and-fast rules for your hypothetical future child that go to the wayside once you’re dealing with the actual flesh and blood version, I eventually relaxed about it, especially when I realized that TV can be a godsend when you need kids to be occupied so you can throw dinner together or move laundry around. Plus, it can actually be educational. I mean, I watch weather and news and the History Channel. Doesn’t it stand to reason that my kids could learn from TV, too?

Luckily, I’m not the only one who has taken this sane approach to screens. Now it seems that people are trading the “no tolerance” attitude toward screens for a more mindful attitude around screen time. It basically comes down to the fact that screens aren’t going anywhere, so maybe moderation is okay for tiny tots, too. It’s about using it as a sometimes tool for interaction and learning rather than an all-the-time babysitter. You don’t want to plop your kid in front of the television to the detriment of active play and interaction and books and toys and hands-on learning — but you can’t tell me there isn’t benefit to snuggling on the couch watching a favorite Disney movie or learning the alphabet via fun online videos.

So while I’ve relaxed my stance quite a bit on screens, I do have some loose household rules in place so that we don’t get out of control on the screens. Here are the rules for my house. 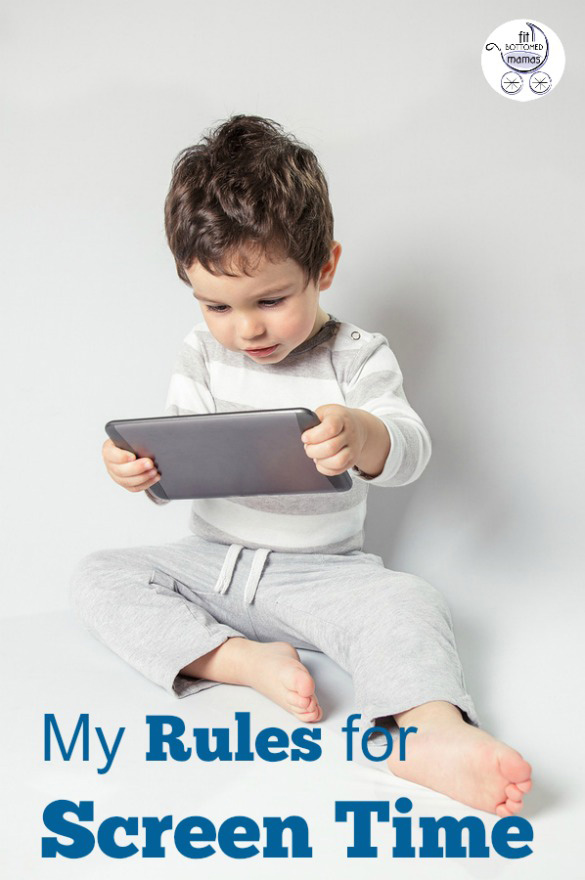 My Rules for Screen Time

There ain’t nothing wrong with an iPad at 6 a.m. When the kids hop in my bed before the sun comes up, I’m not opposed to handing them the iPad to tinker with. An episode of Micky Mouse Clubhouse before the 7 o’clock hour never hurt anyone.

Access denied. The kids aren’t granted an all-access pass to the iPad. I say what they can watch, when they can watch it and how long — and it’s typically only for that pre-dawn spell. Afterwards, the iPad is put up and away. I’m a little more free with the TV — but often the kids will limit TV time on their own and head for the crayons, puzzles, games and toys once they’re done with a show.

Time off for bad behavior. In the case of misbehavior — particularly when the iPad is in use — the iPad is taken away immediately. Sure, it sets off a stream of tears and tantrum, but I have zero tolerance for tossed iPads or wounding other people over the technology.

When sickness descends, all bets are off. When a child is sick, I impose no limits on TV. If it’s a marathon day of Thomas & Friends and Paw Patrol while sitting next to a puke bucket, so be it. If mommy is sick, it’s movie magic time.

The phone is off limits. I never hand my phone over to my kids. This is mostly because I’m afraid of them accessing emails, deleting pictures or making accidental phone calls. I’ll show them a video on my phone, but it’s my phone to crack (I’m bitter because I just shattered mine last week.). Plus, I want to be able to have my kids entertain themselves at restaurants and waiting rooms with conversation and without always having to have a device in hand.

Meals are a no-go … mostly. We put down the devices at meal times. Occasionally I’ll text the hubby at the end of his work day, but for the most part, meal time is for food and chatting. It makes the occasional pizza-and-movie night really fun.

Find the shows they like and that you can tolerate. We have a pretty limited repertoire of shows that are tolerable for both old and young: Thomas, Chuggington, Super Why, Paw Patrol, Sofia the First, Doc McStuffins, and Jake and the Neverland Pirates. If you hate a show, stop showing it and they’ll totally forget about it after awhile. I’m looking at you, Caillou.

Learning tool. Screens can be great learning tools. My son refuses to work with me on the alphabet, but he’ll watch ABC Mouse alphabet videos on the iPad and he loves Super Why. Plus, puzzles, art apps and coloring pages are great for problem solving and artistic expression along with learning to navigate the technology itself.

The long haul. We refuse to turn on DVDs in the entertainment system in the mini van on short trips. It makes it more special for them at a time when you really need them to be entertained on long trips, and I’m old-fashioned in the belief that families should talk and interact on trips to and from the grocery store or park. Heck, I’ll probably even limit screen time on long trips so we can do the standard license plate games to pass the time.

Do you have house rules for screen time? It’s yet another place where I enforce “everything in moderation”! —Erin