Like Jennifer who has a boy of similar age as mine, I’ve been dealing with overnight tantrums lately (coincidence?). The kiddo will wake up and begin making a series of demands: he wants to sleep with us, he wants us to sleep with him, he wants to sleep on our floor. If he could happily sleep with us or sleep on our floor, that would be fine. I would cave. Because we would all get sleep. But no, it cannot be that easy. If it were that easy, well, I wouldn’t be writing about it, now would I? Instead, he climbs into our bed and starts making more demands: more blanket, more animals, we have too many blankets, there aren’t enough blankets, why can’t I have ALL THE BLANKETS? So we tried letting him sleep on our floor. Then it’s that the blankets aren’t straight, he wants all the animals, he wants water. The second you meet a demand, he changes his mind and wants the opposite or he’ll take it to the next level. You give him a stuffed animal, he demands a stuffed animal THAT WE DON’T EVEN OWN. I wish I was joking.

After a series of weeks of dealing with this for most nights, I was willing to try anything. The pediatrician suggested just letting him cry, which is difficult because it’s not just crying, it’s getting out of bed every two seconds and kicking and screaming and hitting. Plus there are other people who need to sleep. I was so desperate for a solution that I got drastic: I cut out his daytime nap altogether. My thinking was that clearly he had way too much energy if he was able to scream for an hour each night, so it’s significantly cut down on the nighttime furor. Thank goodness. I’d rather sacrifice a few moments of daytime peace for a peaceful night, and thankfully, so far, it’s working.

Because it is such a miserable experience, my husband and I had to find the humor in the awfulness just to survive. I mean, there’s only so much crying one can do when you’re feeling like an utter failure, so I had to start seeing the humor in it. Here are just a few thoughts I had as I was dealing with the horror of the overnight tantrum. 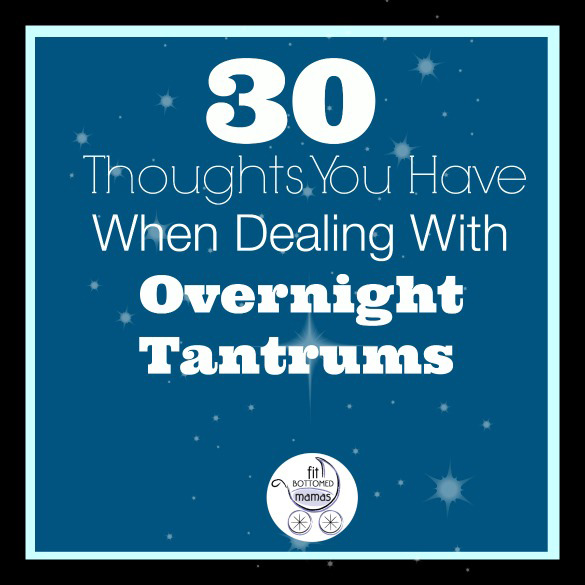 30 Thoughts You Have When Dealing with Overnight Tantrums

Maybe it won’t be so bad this time.

Oh no, it’s as bad this time. Maybe worse?

I’m so going to keep my cool though.

Do not give in.

We do not negotiate with terrorists.

How can someone feel so much emotion?

How can someone feel so much emotion for so long?

His voice will give out eventually.

Can the neighbors hear this?

I really hope the neighbors can’t hear this.

How can his sisters sleep through this?

I wish I could sleep through this.

I would do anything to go back to sleep.

Except give in to his insane demands.

Oh dear goodness, it’s been half an hour of this nonsense.

SO MUCH FOR KEEPING MY COOL I’M GOING TO EXPLODE; I MIGHT AS WELL JOIN IN ON THE YELLING.

Mother of the year. Driven to the brink of insanity by a 2-year-old.

I will miss a lot of things when my kids are older, but I will not miss this. At all.

No one can sleep through this forever. His sisters will wake up any minute.

Your blankets ARE straight enough.

Have you dealt with the craziness of chronic overnight tantrums? What was your solution? —Erin